Self Goal In Indian Football

The Sports Authority of India's recent MOU with a non-profit philanthropic body has raised eyebrows. 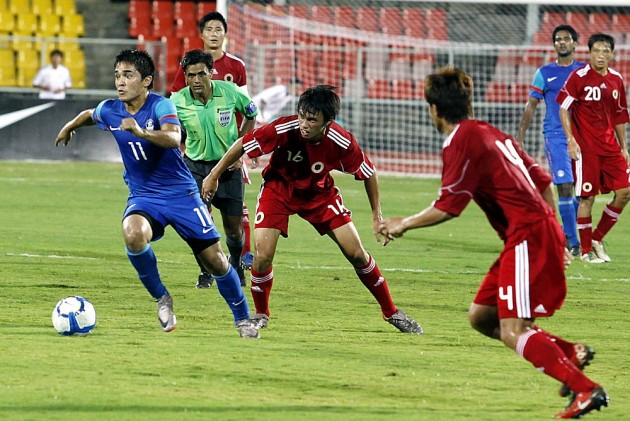 Last month—in the 18th Maan Ki Baat—Prime Minister Narendra Modi, expressed the need to take football to every village in India. He pegged his hope on FIFA Under-17 [under-17 Football World Cup to be hosted by India in 2017]—is an opportunity for India. While the prime minister is committed to making India a power-hub of sporting talent and sporting superpower, the situation on the ground remains grim.

The Sports Authority of India (SAI) recently entered into a MOU with the School Sports Promotion Foundation (SSPF)—a non-profit philanthropic body promoted by Om Pathak, a former IAS officer and the Founder & Chairman, Delhi Public School, Ghaziabad. SSPF has launch a 'National Talent Search & Nurture' initiative which aims to hone talent and encourage football at the grassroots by organizing coaching camps at District, State and National Level—an initiative consistent with the aspiration of the prime minister.

But, last year in October, SAI had already launched a similar initiative: the national scouting project to identify young footballers with the specific objective of preparing the Indian team for the 'upcoming Under-17 Football World Cup.' For this purpose, S.S. Hakim, an Olympian, was appointed the chief project director, in charge of the national scouting project. Though, it's a different matter that he was dismissed from SAI in the mid-nineties after an enquiry found him guilty of gross financial improprieties. He is described as close to the Director General of SAI, Injeti Srinivas.

So when SAI has is carrying out its own talent scouting project of its own, the obvious question is: what was the need of sign a MOU with a private body? It seems to be a clear case of conflict of interest, as the Director General of SAI, Injeti Srinivas, also happens to be the member SSPF. Not only that, Hakim, in charge of SAI's the national scouting project, is also the chairperson of the SSPF's Football Council. The insiders in the sports ministry and SAI, are not happy. They see a 'national cause' being compromised by conflict of interest.

Director General of SAI, Injeti Srinivas is adamant. "The MoU is self-contained and there is no scope of conflict of interest," he replies via mail. He informs that SAI enters with partnership with some sports development entities to exploit synergies and complementarities for sports promotion. He adds, "SAI is willing to facilitate training and competition activities of SSPF subject to no conflict with SAI's own sports promotional schemes. SAI has no role in the management committee of SSPF and hence there is no question of conflict of interest" though, he doesn't elaborate how he'll ensure there's no conflict of interest. Had it been so simple, where was the need for, say for instance, Arun Jaitley to quit as the chief of head of Delhi District Cricket Association before he was to join the union cabinet?

Srinivas too bats for SSPF, "SAI sees school sport as a critical sports foundation activity and hence supports SSPF initiative. SAI believes that SSPF is a not for profit body and hence supports their initiative." The basis of this belief is being questioned by some officials in SAI who plan to raise the issue with the PMO.

Srinivas goes out of the way to defend the credentials of SS Hakim in all earnest, "Shri S. S. Hakim is a(n) eminent football player and Olympics. His contribution as technical director to SAI's junior football development programme is commendable. Over 12000 children have been screened and a few hundred shortlisted. Finally, 120 will be inducted in SAI regional feeder centres. His involvement is purely for technical development issues and he does not administer the programme, which is done by SAI regular staff." And, therefore," SAI has no objections if he provides technical support to SSPF without neglecting SAI'S programme. No conflict observed so far. No reason is seen to treat Shri Hakim as a person non grata. He is a respectable footballer and has great commitment to the sport."

Srinivas sees no conflict, he hasn't observed any conflict, has no objection, if, and it's a big if, Hakim support to SSPF is without neglecting SAI'S programme.

The honing of talent has to go hand in hand with the reform of SAI. Till that time, the Prime Minister Modi's dream, to see India as a sporting super power and to do well in FIFA Under-17, seems far fetched.