The objective appears to be to gradually transform the predominantly terrorist movement into a more wide-based movement of political extremism, backed by calibrated terrorist operations, to secure a stronger position at the negotiating table and achieve what has not been possible on the ground through terrorism alone.

--Respite From A Proxy War

Once again, in one more Indian province, the extreme fragility of order has been demonstrated. A matter of almost trifling significance has been allowed to swell – indeed, has been engineered – into a national crisis. For the past seven years, India has been flaunting data on declining fatalities in the conflict with Pakistan-backed terrorism in Jammu & Kashmir (J&K) as evidence of our successes in the state. But the abrupt meltdown in J&K following upon the approval and subsequent revocation of the land transfer to the Amarnath Shrine Board sharply underlines the question of the credibility and competence of the state, and of the legitimacy of the national and regional leadership among an ever-widening segment of the population.

There is clear evidence of an extraordinary loss of faith, and the deficit of trust has rapidly augmented into endemic mistrust. Conspiracy theories abound, and certain, obviously mischievous, elements have been able to project the formal commitment of a 40 hectare piece of land to a use to which it has informally been put for decades, as a plot to ‘transform the demography of Kashmir’. The credence that has been given to this ludicrous canard among the people of Srinagar, and the lip service the idea of 'defending our land' has subsequently received from some of the most prominent political actors drawn from the valley, is evidence of the utter make-believe in which much of the population exists, and the growing distance between public perceptions and the government.

The sequence of developments is fairly clear, and in any system in which some vestiges of ethical norms had survived, would have shamed the principal political players. In India, however, the very notion of shame has been expelled from the realm of politics. 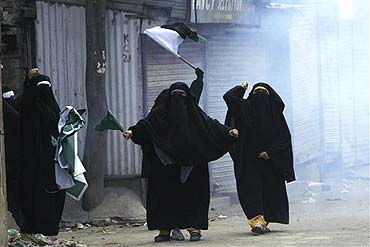 Briefly, the current controversy arises out of the order of May 26, 2008, sanctioning the diversion of a plot of 39.88 hectares of forest land at Baltal to the Amarnath Shrine Board for the raising of pre-fabricated (temporary) structures to accommodate pilgrims to the Amarnath Shrine. No permanent structures were permitted, and permanent residence in the harsh terrain, which is virtually inaccessible for as much as eight months in the year, is not possible. Significantly, this was no abrupt decision. The issue has long been under consideration, and has had a slow and magisterial passage through various levels of government, culminating in the eventual State Cabinet decision, which essentially validated what had already been passed as an interim order by the Divisional Bench of the J&K High Court as far back as May 17, 2005, empowering the Shrine Board to use the land to house pilgrims during the annual Amarnath yatra. Baltal, 93 kilometres from Srinagar and 16 kilometres from the Amarnath Shrine, is the last staging post on the pilgrims’ route.

Crucially, the People’s Democratic Party (PDP), which was then a partner in the state government, was integral to the decisions taken, with various ministers – including, particularly, the ministers of law and forests – drawn from this party piloting the proposal and giving it their unqualified approval. The PDP’s conduct thereafter has been nothing short of disgraceful in the extreme. Immediately after walking out of the government, the PDP has made common cause with communal and separatist elements such as various factions of the All Parties Hurriyat Conference (APHC), to mobilize mass and often violent street demonstrations demanding annulment of the land allocation to the Amarnath Shrine Board, forcing the resignation of Chief Minister Ghulam Nabi Azad, and the imposition of Governor’s rule in the state.

With state Assembly elections around the corner (to be held by November 2008) and general elections for Parliament due a few months later, state and national political formations, all, leapt in to exploit the situation. In an extraordinary combination of political opportunism, folly and weakness, the outgoing Azad government revoked the order of allocation to the Amarnath Shrine Board on July 1, 2008. The fury that had been whipped up in the Valley was now mirrored in an even greater fury in the Hindu-dominated Jammu region, and particularly in Jammu town, which is also a crucial halt on the Amarnath yatra. Long festering sores – the decades of resentment against the valley’s discrimination, against terrorism and over the dispossession and expulsion of more than 400,000 Kashmiri pandits by the Pakistan-backed terrorists and communalists from the Srinagar region – erupted. 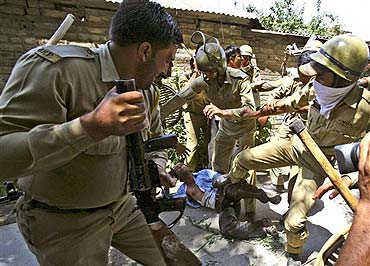 The agitation over the revocation of the land transfer to the Amarnath Shrine Board entered its 43rd day on August 11, with the death toll at 11, and over 500 persons injured. Despite political interventions at the highest levels, moreover, the radical polarization between the Kashmir valley and the Jammu region appears to be exacerbating, with religious extremists on each side occupying increasing space. Worse, every party is making communal calculations; every party – including those who pretend to make pleas for greater harmony and reconciliation in the national interest – plays divisive politics. The space for a truly secular politics in J&K appears to have been entirely exhausted.

While demonstrators in Jammu continue to challenge the relentless curfew, now in its eleventh day, communal elements, led by various factions of the APHC, with the PDP now joining in, have declared their intention to breach the Line of Control (LoC) and ‘march to Muzzaffarabad’ in Pakistan Occupied Kashmir (PoK) to protest the supposed ‘economic blockade’ of the valley imposed by Jammu. The losses that are being incurred by the present disorders will, obviously, be vastly exaggerated, and will eventually become another source of perpetual grievance to be exploited by anti-national elements.

The call to march to Muzzaffarabad, in any event, has hardly been made with any seriousness. It is abundantly clear that no government worth its salt will allow the marchers to get anywhere close to the LoC, and the intention is evidently to internationalize the issue and project a communal solidarity with Pakistan. Significantly, the ‘prime minister’ of PoK, Sardar Attique Ahmed Khan, has declared that ‘his people’ would ‘receive our brethren with open arms.’

It must be evident how completely these developments have aided the cause of communalism, separatism and Pakistan’s proxy war against India. For months, now, Pakistan has been trying – largely unsuccessfully – to raise the temperatures in J&K. There has been a continuous effort, since early 2007, to orchestrate street demonstrations against alleged ‘human rights violations’ by the security forces, and to demand a withdrawal of the army from the state. These efforts were fairly transparent and were limited to the handful of separatist fronts well known to be linked to terrorist formations in the state and to Pakistan – and remained largely unsuccessful.

Abruptly, however, after nearly four years of a ceasefire that had been held without significant incident, a flurry of ceasefire violations have been initiated by the Pakistan army along the LoC. Till August 10, there have already been 20 ceasefire violations on the LoC by Pakistan in 2008 – most of them since June 2008 – principally in the Poonch and Rajouri areas of Jammu, but with incidents also reported from the Uri, Kupwara, Tanghdar, Machail and Gurez sectors. The sheer frequency and intensity of ceasefire violations establish a pattern of a broad strategy of escalation. Commentators have seen this as an effort to find a rationale for redeployment of Pakistani forces along the LoC and Indian border, in order to justify withdrawals from counter-terrorist operations in the FATA and NWFP areas, where Pakistan wishes to dilute its operations against the Taliban and al Qaeda. 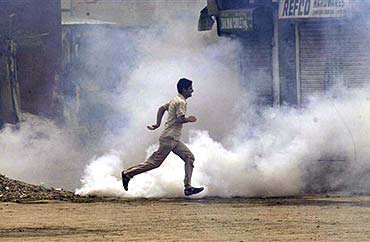 Pakistan’s intentions are, and long have been, no secret to observers in this region. But, at a time when they most needed it, India appears to have provided the Inter Services Intelligence (ISI) the most extraordinary gift in the form of the disorders and communal polarization that have now arisen out of the self-inflicted wounds in J&K. Even without the provocations of external agency, these wounds will take an age to heal. As they are dovetailed into Pakistan’s subversive agenda, they will provide an inexhaustible source of further provocation and violence.

An "all party delegation", headed by union home minister Shivraj Patil, has visited J&K in an effort to ‘resolve’ the crisis. It is significant, however, that leaders from Jammu and from the valley remained unwilling to sit together with the central team, and had to be met separately, at Jammu and Srinagar, respectively. Unsurprisingly, the delegation appears to have failed to soothe tempers in either region, many politically correct declarations and speeches notwithstanding.

Worse, far from any attempt to improve the situation, political formations, without exception, continue to furiously scrape away at the wounds, to keep them bleeding. The PDP, which participated in the all party delegation’s deliberations, has joined the ‘Muzaffarabad Chalo’ bandwagon. Various national political parties continue to justify their own actions or criticize rival formations.

A Governor’s recall has been allowed to become an issue of public debate, creating a further and grave handicap in the state’s capacities to address the crisis. The Governor himself has been caught in a predicament not of his own making. Injured egos abound, and appear to prevail over the national interest. Competitive communalism and brinkmanship are the core elements of politics in J&K, with parties completely at odds with each other, scoring points that they think will secure apparent electoral advantage, but which are progressively undermining national security.

At least some parties appear to be planning to extend this destructive dynamic beyond J&K, to other parts of the country, and this portends disaster. Even at the peak of terrorism in the Punjab or in Kashmir, the threat remained largely confined only to a part of the country. Today, J&K’s ailment and Pakistan’s proxy war are already and progressively afflicting targets across the country.

J&K has been, and, despite repeated failures and aberrations – including the great and neglected injustice done to the Kashmiri pandits – will remain, a test case for the success of Indian secularism and national integration. While separatists and Pakistani proxies have great reason to celebrate the ongoing disorders in the state, political formations and leaders committed to the national cause need urgently to pause and introspect on the consequences of the current course they have variously adopted.