"We have been desperately looking for a person who worked in the Jammu and Kashmir Home department but cooperation from the state is nil as they refuse to comply with our notice on the pretext that the notice has been sent under Indian Penal Code and the state follows Ranbir Penal Code," an ATS official said. 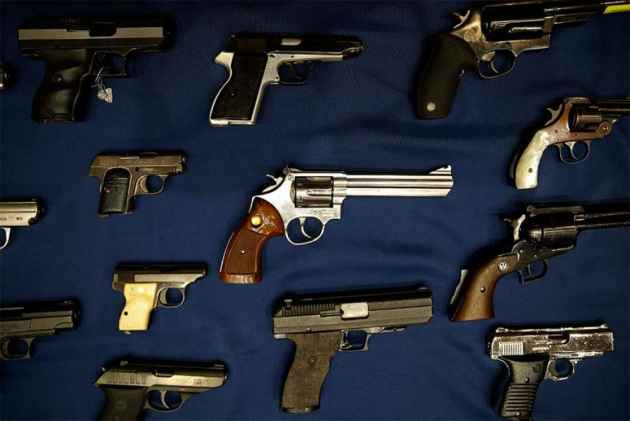 Several senior Jammu and Kashmir government officials are under the scanner of the Rajasthan Police's Anti Terror Squad, which is probing 4.29 lakh arms licences being issued in the last one decade from various districts of the militancy-hit state, officials said.

A majority of these licences were given to non-residents on the basis of forged documents, they alleged.

Taking cognisance of the ATS' requests, pending since last year, the Jammu and Kashmir government issued a notification on July 12 asking divisional commissioners and deputy commissioners to submit a detailed report of those issued arms licences in the last year.

The order instructs the deputy commissioners of Kishtwar, Kupwara, Ganderbal in Kashmir region, Leh in Ladakh division and Rajouri, Ramban, Reasi and Udhampur in Jammu province to furnish all records within a month.

The deputy commissioners of all districts have been barred from issuing any further arms licences till further orders, it said.

It was decided during a meeting with Jammu and Kashmir Governor N N Vohra -- the state is under Governor's Rule -- to direct all district magistrates to take urgent steps to revoke all individual arms licences issued to various persons, other than those to the army, paramilitary and police personnel, officials said.

The district magistrates were asked to ensure that all weapons are deposited in neighbouring police stations within 15 days -- the period ends on July 27.

According to a senior Rajasthan Police official, the Jammu and Kashmir government was informed about the racket last year and several letters addressed to then chief secretary B B Vyas were sent.

"However, no information was shared with us," he said.

Then superintendent of police Vikas Kumar, who is now deputy inspector general of the Rajasthan ATS, camped in Srinagar last year and in Jammu this year, but officials in the state refused to share any information, including the postings of previous deputy commissioners, it is learnt.

The Jammu and Kashmir government did not give lists of former special secretaries, deputy secretaries and under secretaries, saying all records were washed away in the 2014 floods.

"As regards to the incumbency chart of the officials posted in the arms section of the home department since 2001, it is informed that as per the concerned sections, all records were washed away during 2014 floods," stated the communication from the state home department to Rajasthan Police.

According to ATS officials, 1,32,321 of the 1,43,013 licences in Jammu region's Doda, Ramban and Udhampur districts were issued to those residing outside the state.

The figure for the entire state is 4,29,301, of which just 10 per cent were issued to residents in the state.

Senior officials in the governor's office in Jammu and Kashmir said action will be taken against all those guilty of issuing fake licences.

As the probe into the alleged racket started gathering pace, the brother of a senior Jammu and Kashmir IAS officer was arrested by Rajasthan Police in Gurgaon recently. Police alleged that Rs 40 lakh was transferred into his account by a gun dealer.

"We have been desperately looking for a person who worked in the Jammu and Kashmir Home department but cooperation from the state is nil as they refuse to comply with our notice on the pretext that the notice has been sent under Indian Penal Code and the state follows Ranbir Penal Code," an ATS official said.

A letter written by an under secretary in Jammu and Kashmir's Home department, a copy of which was sent to the department's principal secretary (Home), asked Rajasthan Police not to send notices to officials of the state.

"Serving notices to government officials has been examined in consultation with the state legal department....It is manifested that the notices served on the officer/officials of the state home department are without any authority of law," it said.

Rajasthan ATS officials said they were not aware of the magnitude of the case and its serious ramifications when they began the operation, code named 'Jubaida'.

A sample survey of licences issued from Kupwara, a frontier district in north Kashmir, showed that no files or registers were maintained by the district authorities and many of the arms licences may have been issued to outsiders on the basis of forged documents.