'What has BJP said to Governor, that he did such a stupid action? Order of Governor is open invitation to do corruption.' 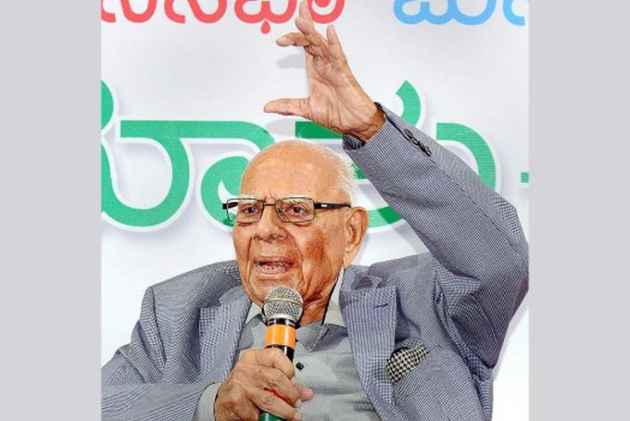 Senior lawyer and jurist Ram Jethmalani today moved the Supreme Court in his personal capacity against the Karnataka governor's decision to invite the BJP to form government in the state, saying it was a "gross abuse of constitutional power".

A bench headed by Chief Justice Dipak Misra considered the submission of Jethmalani seeking urgent hearing and said that a three-judge special bench, which had heard the matter in the early hours, would re-assemble tomorrow.

#WATCH Senior lawyer Ram Jethmalani speaks on Karnataka politics, says, 'What has BJP said to Guv, that he did such a stupid action? Order of Guv is open invitation to do corruption.' Jethmalani has approached SC against Karnataka Guv's invitation to Yeddyurappa for forming govt. pic.twitter.com/uLa0oXcPQZ

The bench also comprising Justices A M Khanwilkar and D Y Chandrachud asked the veteran lawyer to make his submission before the three-judge bench led by Justice A K Sikri on May 18 when the petitions filed by the Congress party and the Janata Dal (Secular) (JD(S)) would be taken up for further hearing.

He said that he has not come before the court in favour or against any party but has been hurt over the unconstitutional decision taken by the Governor.

The Supreme Court bench, which also comprised Justices S A Bobde and Ashok Bhushan, today in a pre-dawn hearing refused to stay Yeddyurappa's swearing-in as Karnataka chief minister after the Congress-JD (S) combine made a last-ditch attempt to stall the saffron party's surge in the southern state.

The Congress alleged that the BJP, which has 104 MLAs, was invited by the Governor to form the government "in an unconstitutional manner" even as JD(S) leader H D Kumaraswamy along with Congress has the support of 116 MLAs.

In the May 12 polls, BJP emerged as the single largest party with 104 members, while the Congress secured 78, the JD(S) 37 and others three.