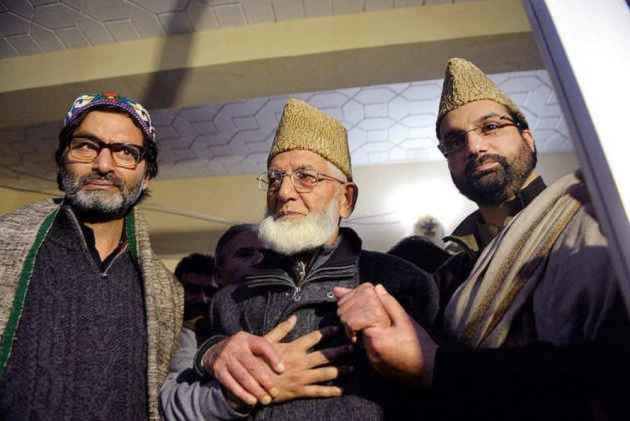 As the National Investigation Agency (NIA) continues its raids across the Valley, the separatist leaders today called NIA as Gabbar Singh of famous Bollywood blockbuster, Sholay.

Separatist leader, Mohammad Yasin Malik, said, the NIA presumes itself as Gabbar Singh and the organization has this illusion that people would fear it. Challenging, the NIA, Malik said if they have this notion of Gabbar Singh, the separatist leaders, Syed Ali Geelanai, Mirwaiz Umar Farooq and Malik himself will visit the NIA headquarters at New Delhi on September 9. “We have seen worst. We will take up this challenge of the NIA also”, he said. He said they would tell the NIA that they would not accept its “terrorism.”

Geelani, who is under house arrest, also addressed the press through phone.

Malik said in past 30 years they have seen CBI, IB, MI and other investigation agencies. But, he said, the NIA approach was of “threats and terror” and it was unacceptable. Malik said the NIA would face resistance from every quarter in Kashmir if it continues its, what he called “terrorism.”

While as Mirwaiz Umar Farooq said that the government of India was following a  policy of coercion  defamation and intimidation in Kashmir as it does not want to address the actual issue.

“Vicious and consistent propaganda through media especially electronic and social is being carried out. Each day media trials are conducted on prime time television and Kashmiri movement ridiculed leadership abused and Kashmiris humiliated”, Mirwaiz said. He said, “people of India are being fed lies and propaganda.”

“Intimidation and harassment of our family members associates friends acquaintances party cadres organizations associated with us or any and everyone they can lay their hands on is done through sending of so called notices of NIA”, Mirwaiz said.

“Members of Business community and now press and media fraternity and youth are also being targeted, harassed and jailed while writer’s intellectual’s artists respected members of civil society or anyone who raises a voice against oppression and for resolution of Kashmir dispute is intimidated by sending of the notices”, he said.

“The narrative of the Kashmir dispute and our struggle for self determination is being deliberately distorted and it is projected as a sponsored movement from across the border where money is the motivation and the end”,  Mirwaiz said.

However, he added that the presence of “700,000 armed forces that are stationed here making Kashmir the world’s most militarized zone is not explained.”

“Did the more than one lakh people who were killed mercilessly by forces in the past 27 years die for money?” Mirwaiz asked.

While killings, oppression and harassment continues, Mirwaiz said, the judicial route is now also being used to launch another offensive against the people of J&K through ways to abrogate Article 35 A and 370 .

“The move aimed at settling outsiders in J&K in order to change the demography of the state is being pursued to render Kashmiris powerless and irrelevant and hence dilute the disputed nature of Kashmir. This move has a direct bearing on our Right to self determination guaranteed by the Indian state at the UN and ratified by the world body itself,” Mirwaiz said.

Taking on the NIA the separatist leaders said if the whole “drama” by the NIA was  being enacted to get to the three leaders, they were ready to go to jail anytime.

“There is no question that we can be pressurized to move away from the path of seeking justice and resolution of the Kashmir dispute in accordance with the people's aspirations and wishes,” a joint statement issued by the leaders said.