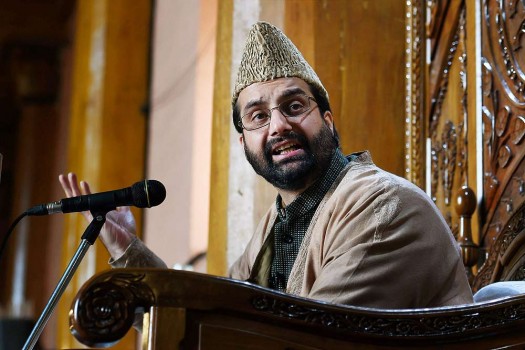 The moderate separatist leader, Mirwaiz Umar Farooq, has called for an “imaginative solution” of Kashmir, which would satisfy India, Pakistan, and the people of Kashmir.

Mirwaiz enlisted the four-point formula of former Pakistan President General Pervez Musharraf as an “imaginative solution” and said it talked progressively about military de-escalation in Jammu and Kashmir.

Mirwaiz’s renewed thrust on the Musharraf formula has come at a time when the Valley is yet to come out of the impact of 2016 mass protests, which started after July 8,  2016, after the killing of militant commander Burhan Muzaffer Wani.

Pervez Musharraf’s four-point formula envisages that (1) Kashmir should have the same borders but people be allowed to move freely across the region; (2) the region should have self-governance; (3) troops should be withdrawn from the region in a phased manner; and (4) a joint mechanism comprising representatives from India, Pakistan and Kashmir be set up to supervise the implementation of such a road map for Kashmir.

Geelani previously has opposed the formula calling it a a diplomatic trick of converting the cease-fire line into the permanent border.

Mirwaiz, however, in his tele-address to the Harvard Kennedy School for Business and Government specifically mentioned Musharraf formula. He said most simple and direct way to resolve Kashmir is to hold the promised referendum. “Let India Pakistan and the world honor its commitment made to the people of Jammu and Kashmir through the United Nations and hold a referendum giving the people of J&K a chance and choice to decide their destiny. It is most democratic and fair. Or to get this issue on the table for an imaginative solution among the three stakeholders to the dispute India, Pakistan and the people of J&K to the satisfaction of all especially the most affected party -the people of J&K,” Mirwaiz said.

He said for arriving at the imaginative solution, “India has to give up its stubbornness and engage with the sentiment in Kashmir and simultaneously India and Pakistan have to talk to each other.”

“The process of conflict resolution is a process of deliberation and discussion but before that it is about being on the same page in terms of sincerity and willingness to solve the problem. If that part is overcome frameworks and options immediately open up,” he said.

“India which calls itself the world’s largest democracy insists that Kashmir is its integral part – no matter what. If it has to kill all Kashmiris for that, so be it. It is not prepared to listen to Kashmiris, to what they want. To the people of Kashmir what matters to India is the territory of Kashmir and not the people as they witness it each day. More than seven hundred thousand Indian troops are used as instrument of control to hold on to the territory of Kashmir and its people against their will, making Kashmir the most militarized zone in the world,” Mirwaiz said.

“Repeated mass uprisings in 2008, 2009 and 2010 or in the most bloody summer of 2016 are met with the same response -ruthless repression. Year 2016 saw the state crushing us and our resistance to its unprecedented brutality. As protesters hit the streets, forces immediately responded with lethal effect firing bullets and metal pellets into the crowds”, he added.