Prime Minister Narendra Modi offered prayers at the Badrinath temple on Sunday and also spent some time meditating on the mountains. 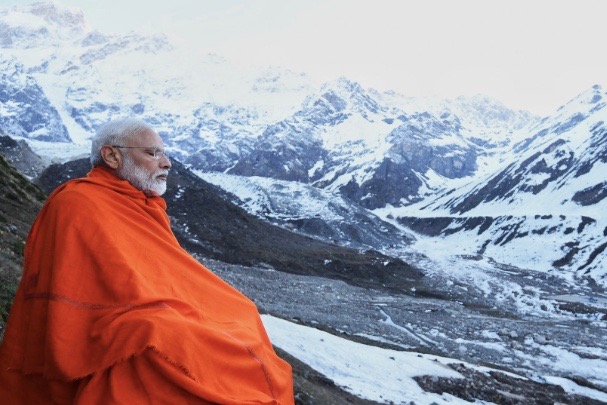 After spending the night meditating in a cave, Prime Minister Narendra Modi offered prayers at the Badrinath temple on Sunday and also spent some time meditating on the mountains. "Serene and spiritual", is how the Prime Minister described it.

There is something very special about the Himalayas.

It is always a humbling experience to return to the mountains. pic.twitter.com/o01iPJ5dl3

He reached Badrinath after spending around 20 hours at the Himalayan shrine of Kedarnath.

His visit to the two shrines, nestled in the Garhwal Himalayas came, on a day when the country was witnessing the last phase of polling for the Lok Sabha elections.

The iconic Badrinath Temple remains an important part of our culture and ethos.

Had the honour of joining the Puja at the Temple today. pic.twitter.com/AcHJxImztU

in the morning, the prime minister offered prayers at the Kedarnath temple. He later thanked the Election Commission for permitting him to visit the Himalayan shrine and take a break from the gruelling election campaign. "I got two days rest," he said.

Badrinath-Kedarnath Temple Committee chief Mohan Prasad Thapliyal said the prime minister offered prayers at the temple for around 20 minutes and was given a greeting card made on a "bhojpatra" (birch leaves) by the temple's priests.

He was also given a shawl by the residents of Mana village, he said.

The prime minister took a walk inside the temple complex and later, shook hands with the devotees and locals, Thapliyal said, adding that Modi also met pilgrims waiting near the shrine.

On Saturday, Modi offered prayers for around 30 minutes at the Himalayan shrine of Kedarnath, a day after campaigning for the general election came to a close.

The prime minister then went inside a cave near the shrine to medidate. Draped in a saffron shawl, Modi was seen meditating at the holy cave.

The Election Commission gave its nod to Modi's visit while "reminding" the Prime Minister's Office that the model code of conduct is still in force.

Polling for the seventh and the last phase of the general election was held Sunday.

The Trinamool Congress (TMC) lodged a complaint with the Election Commission against the Prime Minister for allegedly violating the Model Code of Conduct (MCC) on polling day.

"Though the campaign for the last phase of polling for 2019 Lok Sabha elections got over on May 17 at 6 p.m., Narendra Modi's Kedarnath Yatra is being covered and widely reported in local media as well as the national for the last two days. This is a gross violation of the Model Code Of Conduct," said Derek O'Brien, leader of the TMC Parliamentary Party in the Rajya Sabha.

In Kedarnath, Modi told the media that he was completely cut off from the world inside the specially-created cave, which was furnished with amenities such as power, an attached toilet, a telephone, a CCTV etc. "There was no communication, only a small window through which I could see the temple," he said.

He said blessings of Lor Shiva would continue to bestow on India as well as the whole humanity. "I don't ask for anything from the God. I think, the God has made us to give something to the society," he said.

Modi also appreciated the redevelopment work at Kedarnath after the 2013 deluge left town battered and said a dedicated team was engaged in the process. "I monitor the work through video conference from time-to-time," he said.

Expressing satisfaction with the rebuilding work, Modi said people should visit Kedarnath and other areas of India in addition to visiting places like Singapore and Dubai.

He thanked the media for coming to Kedarnath despite the tough election schedule and said the message through the media about the redevelopment in the area would be positive.

He is on a two-day visit to Uttarakhand, and returns to Delhi in the evening.