Maurya is widely expected to join the Samajwadi Party but has not made a formal declaration. The SP, however, welcomed him to their fold, even sharing a picture that showed him with party president Akhilesh Yadav. 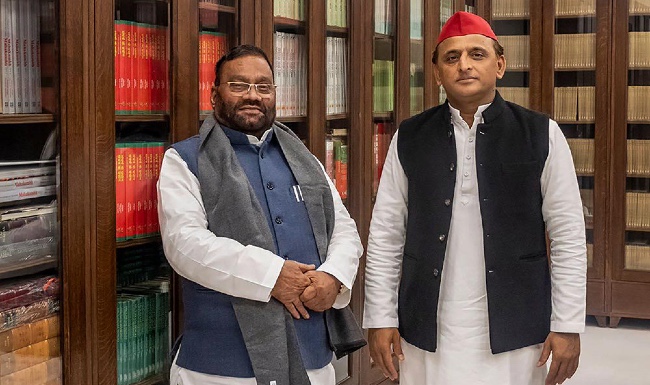 In a jolt to the BJP in poll-bound Uttar Pradesh on Tuesday, OBC leader Swami Prasad Maurya resigned from the state cabinet and three other MLAs announced they are quitting the party.

Tindwari MLA Brajesh Prajapati, Tilhar’s Roshan Lal Varma and Bilhaur’s Bhagwati Sagar announced that they are leaving the BJP in Maurya’s support, amid speculation that others could follow them. There were reports that another BJP MLA, Vinay Shakya from Bidhuna, too is quitting the party. But in a video clip, his daughter Riya Shakya claimed he is missing. She alleged that her father, who has been ill since a stroke, has been taken to Lucknow by some relatives and his whereabouts are not known.

Maurya said he has resigned as Labour Minister in the Adityanath cabinet due to "gross neglect" towards Dalits, the backwards, farmers, unemployed youth and small traders. There was no immediate word on the resignations being accepted. On Twitter, Deputy CM Keshav Prasad Maurya urged the leader to reconsider his move.

"I don't know for what reasons respected Swami Prasad Maurya has tendered his resignation. I appeal to him to sit down for a talk. Decisions taken in a hurry often prove wrong," he said in a tweet in Hindi.

In his resignation letter to Uttar Pradesh Governor Anandiben Patel, Maurya said, "I discharged my responsibilities as the minister for labour, employment, and coordination in the council of ministers headed by Chief Minister Yogi Adityanath, despite adverse circumstances and ideology." "Due to the attitude of gross neglect towards Dalits, backwards, farmers, unemployed youth and small and medium-sized traders, I am resigning from the Yogi ministry of Uttar Pradesh," he tweeted in Hindi.

The five-time MLA from Padrauna in eastern UP had crossed over to the BJP from Mayawati’s Bahujan Samaj Party before the 2017 assembly polls. His daughter Sanghmitra Maurya is the BJP MP from Badaun. His departure from the BJP could damage the party's prospects in at least 20 seats spread across Kushinagar, Pratapgarh, Kanpur Dehat, Banda and Shahjahanpur, observers say.

The SP tweeted a photograph of Swami Prasad Maurya and MLA Roshan Lal Varma with party chief Akhilesh Yadav. "Welcome to the Samajwadi Party. There will be a social justice revolution. There will be a change in 2022,” it said. But Maurya is yet to declare his next move.

"I am a political person and I will be talking to one political party or the other. With whom I talk, that will be done after consulting supporters," he told reporters. His daughter Sanghmitra Maurya told PTI that her father has definitely resigned but has not joined the SP or any other outfit yet. Asked about the SP tweet – and a similar one by Akhilesh Yadav -- she said even in 2016 when her father left the BSP, Yadav’s uncle Shivpal Yadav had posted a photo with him on social media.

Maurya told reporters that he had raised issues that concerned him earlier with the party. “I always spoke at the relevant forum, be it the government or the party leadership. I was heard but it led to nothing." BJP Tilhar MLA Varma, who reached the Raj Bhavan here with a copy of Maurya's resignation letter, said, "I have resigned from the BJP and will be with Swami Prasad Maurya. When we used to raise the grievances of the people, we were not heard."

"We had complained to the chief minister and also to Swatantra Dev Singh. But nothing happened. I will be joining the SP in the next couple of days," he told PTI.  He said unemployment has increased and the backward castes ignored. “We flagged their issues, but no one heard us. A handful of officials run this government,” he said, also accusing minister Suresh Khanna of placing hurdles in development projects in Shahjahanpur.

Bilhaur MLA Bhagwati Sagar too said he is with Maurya. "We will decide our future course of action and go wherever our grievances are redressed and we get justice," he said. When asked about the timing of his decision, the MLA said, "We were struggling for the past over four years. It is not a matter of getting party tickets for contesting the polls. The decision is taken in the interest of our community."