MNIK is an important film not because a bunch of thugs tried to stop its screening. It is significant because a big mainstream icon has stuck his neck out and taken the risk of asserting, 'Hey, yes, I’m a Muslim'. 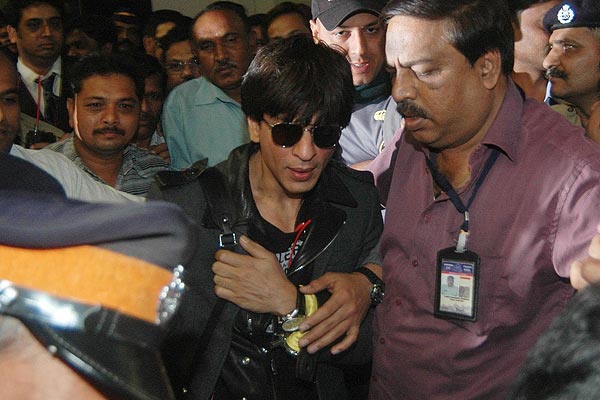 My Name is Khan is an important film not because a bunch of thugs tried to stop its screening. I have just returned from a packed morning show in a Delhi multi-plex and would stick my neck out and say it is significant because a big mainstream icon has stuck his neck out and taken the risk of saying--hey, I may be SRK the big movie star, but I’m also a Muslim and please love me for it and please, please, don’t hate me for it.

This is a novel positioning for a Muslim actor in the mainstream. If I have my Bollywood facts straight, many Muslim movie icons of the past changed their names because they or their producers believed Hindu screen names were more acceptable. Of course that has changed in the past two decades and we have many a Khan in the film industry. But Indian Muslims in any professional or artistic field do not understandably want to stress their religious identity.

It certainly represents a potential a risk for a mainstream icon. But SRK has taken that risk and come out with flying colours. The theme of the film is so topical and the treatment so universal that I believe the Indian film industry has just produced an international block-buster. This is not just an ethnic Bollywood song and dance film that will draw NRI audiences in London and New York. This film will draw a genuinely international audience, from the west to the entire Muslim world. It is world cinema produced by our Hindi film industry.

The depiction of the Indian Muslim characters transcends the Ram-Rahim stereotype Bollywood has dished out for decades. The treatment also does away with the devout versus liberal formula. Rizwan Khan, the character played by Shahrukh, is a believing Muslim who says his prayers and quotes from the Quran. The other well etched “Muslim” characters are his mother played by Zarina Whab and his hijab-wearing sister- in-law who lives in the West. All the characters ring true, they are religious but they are above all humanists. Kajol, with such deceptive ease, is absolutely terrific as Mandira, who pays a price for marrying a Muslim. None of the Muslim characters suggest one needs to shed religion to be a good human being.

Far too many Hindi films that have tread the tricky but topical Muslim identity issue have got it wrong. These films either talk down to or deliver a sermon to the community or they crudely try to cash in on sensational stereotypes. Hats off to Karan Johar for getting all those little but critical nuances right. It is significant that this mainstream director criticised for his bubble-gum fantasy land films has made such a big hearted film on such a burning subject. Perhaps it required the sensitivity of a mainstream film-maker to realize that more people relate to big and simple messages than complex, cerebral material.

It’s a heart warming and brave film by a team not known for dealing with risky material. Many people will love the film. But there are many who will actually be quite uncomfortable with the content but find it difficult to confront the message of universal brotherhood. I can imagine a snigger campaign by this lot that will go on the lines of:  "See, we told you Shah Rukh is a Muslim first… These are the kind of people who believe Muslims should be apologetic about their identity. They would not like a national icon to loudly proclaim this identity."

But SRK has politely and firmly told this lot to go to hell. Their growing irrelevance stares them in the face in the face of this film being a huge success.