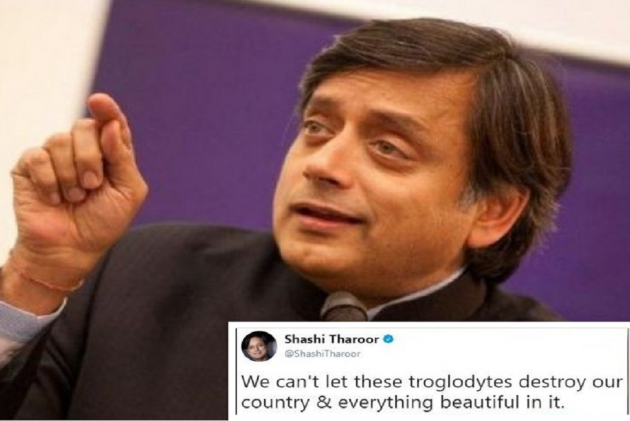 Shashi Tharoor, who never shies away from using his strong vocabulary in his tweets, has proved it yet again. This time, the word is ‘troglodytes’.

“Taj Mahal must be demolished and a Tejo Mandir built in its place, says Vinay Katiyar MP of ruling party,” Ghose Tweeted.

In response to it, Tharoor quoted the tweet and said, ‘We can’t let these 'troglodytes' destroy our country and everything beautiful in it.’

Now, according to Oxford dictionary, the word 'troglodytes', especially in prehistoric times, means a person who lived in a cave.

This is not the first time when Twitterati were forced to open their dictionaries to find out the meaning of Tharoor's tweets. There have been several instances in the past where Tharoor has put on display his eloquent language skills. So much so that even a typing mistake from his Twitter handle gets mistaken to be a new word.

Here is a list of some of those words which Tharoor has introduced through his tweets: In May last year, Tharoor made a sharp remark on Twitter by saying, ‘Exasperating farrago of distortions, misrepresentations and outright lies being broadcast by an unprincipled showman masquerading as a journalst’ (sic). However, more than the scathing comment, what caught people’s attention was the word ‘Farrago’. The word according to the dictionary means ‘a confused mixture or a hotchpotch’. Within just a few days, Tharoor again came up with another word. This time it was 'snollygoster'. Tharoor tweeted, 'Word of the day! Definition of *snollygoster* US dialect: a shrewd, unprincipled politician First Known Use: 1845 Most recent use: 26/7/17'. Then, in July last year, Tharoor took it upon himself to actually coin a new word, 'Webaqoof'. He tweeted, ‘New Hinglish 21st century dictionary: *Webaqoof*: “one who believes every claim or allegation on the internet & social media must be true”. In August, Tharoor introduced India to ‘Puerile’. He tweeted, ‘Their harassment was puerile. One so-called journalist even asked “why do you have an evil laugh?” Another called me a murderer & added “sir”!’

However, the word according to the dictionary means, childish, immature and silly. Now with every tweet of his going viral, Tharoor took to Twitter in December to clarify his usage of these ‘big’ words. A part of his tweet said, ‘I choose my words because they are the best ones for the idea I want to convey, not the most obscure or rodomontade ones!’ In the process, he ended up introducing Indians to yet another new word, Rodomontade.

The word 'Rodomontade' means boastful or inflated talk or behaviour.