Abe-Modi Meet: Is Japan The New Russia For India?

In an era of Asian strategic uncertainties and global power transition, India-Japan defence and security linkages have become particularly significant. Japan has shown willingness to fund projects in border states where even World Bank was hesitant. 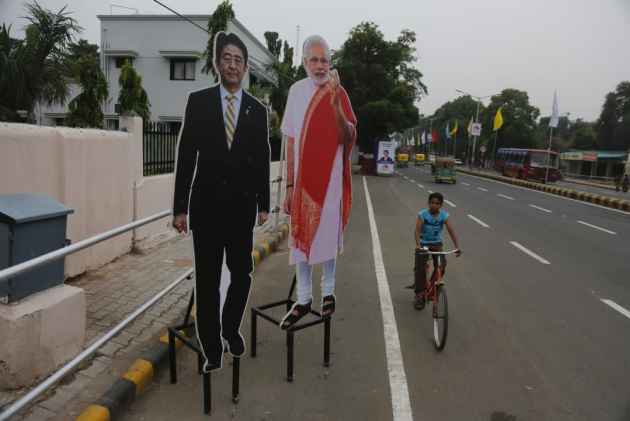 Japanese Prime Minister Shinzo Abe and Indian Prime Minister Narendra Modi will meet in Gandhinagar, Gujarat for the 12th India-Japan annual summit, where the two leaders will review progress made so far and identify pathways for the future under the Special Strategic and Global Partnership between the two.

Abe and Modi are meeting at a strategically significant time when India and China have managed to disengage the forces at Doklam but with heightened tensions in the Korean Peninsula following North Korean nuclear and missile tests. Both these events remain significant developments for India and Japan but given the geographic distance that separates them, there is very little that the two can do to come to each other’s aid.

Therefore, peacetime collaboration and capacity building across several sectors including strategic infrastructure and defence are vital, and it will keep the momentum in the bilateral relationship but also help strengthen India’s defenses. The bilateral annual defence dialogue held in Tokyo last week highlighted some of these possibilities including close collaboration in defence production involving also dual-use technologies. The bilateral Memorandum on Defence Co-operation and Exchanges in September 2014 and the two Defence Framework agreements signed in December 2015 provide as the umbrella pacts for India and Japan to pursue closer defence and security cooperation.

In an era of Asian strategic uncertainties and global power transition, India-Japan defence and security linkages have become particularly significant. Establishing an inclusive Asian strategic space that is shaped by all rising powers and avoiding the emergence of a unilateral Asia continues to be a major driver in this regard. Additionally, the military powerhouse of China along with its expansionist behaviour and a belligerent North Korea have necessitated close cooperation between democracies such as India and Japan. The inability of the global nuclear regime and the big powers to restrain North Korea could produce results that may not be in the long-term interests of China, for instance. Dangers of a nuclear North Korea also impact upon India. The “complex proliferation web” and the possible clandestine trade between North Korea and Pakistan in the nuclear and missile technologies, all under the blessing of Beijing, are continuing worries for India.

Given these security concerns and challenges, India and Japan have put in mechanisms to facilitate defence cooperation. While these have so far not produced much in concrete terms, the initial conversations suggest significant possibilities. The two sides are believed to be making progress with regard to the Japanese offer of US 2 amphibious aircraft. Japan’s advanced aircraft industries offer yet another possibility. Defence electronics is another significant area for cooperation. This assumes importance considering the larger share of US weapon platforms that India is beginning to use, because these platforms have used key Japanese electronics. These are areas that India should be focusing on as these could be expanded under the “Make in India” initiative and build partnerships between Indian and Japanese small and medium size enterprises as well. Development of submarines is significant although India is yet to take it up with Japan. India has been so far collaborating with France although it has been faced with many delays, reducing India’s submarine fleet to a critically low number. If India does not take corrective measures soon, this will have dire consequences for Indian security. Partnering with like-minded strategic partners such as Japan will have multiple benefits, including that of strengthening maritime security cooperation.

Japan has remained a privileged partner in India’s infrastructure development story, be it the Delhi metro or the quadrilateral highway or the Mumbai-Ahmedabad shinkansen rail corridor projects. In the last few years, however, India has opened up more strategically vital projects to Japan such as development of India’s northeast and Andaman and Nicobar Islands. Northeast infrastructure development has been on the bilateral agenda for a couple of years, but giving it a focused push and direction, India and Japan created India-Japan Coordination Forum for Development of North East on August 4. The new institutional set up, critical in India’s furtherance of the Act East Policy, was announced at a meeting of the Ministry of Development of North Eastern Region and the Embassy of Japan. Earlier, in April 2017, the Japan International Cooperation Agency (JICA) had concluded an agreement with the Indian government to fund phase I of the North East Road Network Connectivity Improvement Project to the tune of $610 million (67 billion yen). This phase will involve building two highway projects in Mizoram and Meghalaya, National Highway 54 (NH 54) and National Highway 51 (NH 51) respectively. NH 54 is also critical in implementing better connectivity under the Kaladan-Multi-Modal Transport Corridor Project that will connect India’s northeast with the rest of India via Myanmar. These engagements see a major convergence between India’s Act East Policy and Japan’s Partnership for Quality Infrastructure (PQI) initiative. Japanese willingness to fund projects in the northeast is also significant because even multilateral funding agencies such as the World Bank have been hesitant to fund project area in the so-called disputed areas such as Arunachal Pradesh that is claimed by China.

Partnership between New Delhi and Tokyo in infrastructure projects are not limited to India alone – in fact, the two have plans for ambitious projects across the developing world in Asia and Africa. At the African Development Bank (AfDB) meeting in Gujarat in May this year, Modi announced the Asia Africa Growth Corridor (AAGC), an initiative that is going to be jointly undertaken by India and Japan. India has been involved in developmental as well as infrastructural projects in Asia and Africa but joining hands with Japan, a more capable power with a larger kitty and advanced technologies, can become effective and efficient. Japan has reportedly agreed to fund to the tune of $200 billion for the growth corridor in Africa. While many have touted this as response China’s One Belt, One Road (OBOR), the reality is that India and Japan began this initiative way back in 2010 to strengthen development and connectivity between Asia and Africa. The Vision Document has identified four core areas for this growth corridor - Development Cooperation Projects, Quality Infrastructure and Institutional Connectivity, Enhancing Skills, and People-to-People Partnership.