Should China Cozying Up To Bangladesh Worry India? 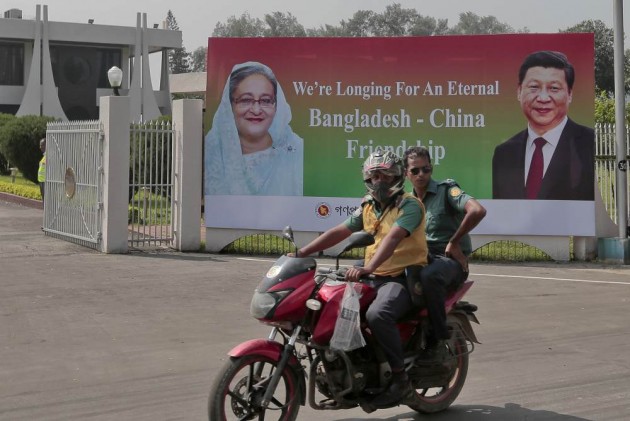 When Chinese President Xi Jinping stopped over at Bangladesh on October 14 while on his way to Goa for BRICS summit, he promised truckload of cash—exactly $21 billion–as aid and loan for Bangladesh for various infrastructure and development projects. In the bargain, he got a promise: Bangladesh will become the strategic partner of China.

The China-Bangladesh handshake has set off the alarm bells in India.

Bangladesh is not only geographically linked to India but is also one of the friendliest countries in the neighbourhood. India is worried about the bonhomie largely due to the perception that China’s motivation to engage with India’s neighbour is to pursue its policy of encirclement.

Jinping’s visit was the first by a Chinese President in the last thirty years. President Abdul Hamid gave him a warm welcome at the airport. Besides, he called on Prime Minister Shiekh Hasina and leader of the opposition Bangladesh Nationalist Party Begum Khaleda Zia.

During his meeting with Hasina, they discussed issues for bilateral, regional and international co-operations. The crowning glory of the visit was the 27 agreements and MoUs, which also included 12 loan and mutual agreements, signed between the two countries.

The visit also spotlights China intention to stop looking at Bangladesh from the Pakistan’s prism. After the independence of Bangladesh in 1971, China declined to recognise that country and opposed its entry into the United Nations. But both the countries have made peace with the past.

Today, Bangladesh considers China as a trusted friend and ally. China is its biggest trading partner with trade crossing $10 billion. In 2015-16 Bangladesh imported $9.8 billion-worth goods from China, which was $5.9 billion in 2010-11. Bangladesh makes all big military shopping from China.

The subsequent military dictators who ruled Bangladesh pursued a policy of distancing itself from India. The country’s ties with China took off from there and prospered over the years.
But it was not all downhill from there. India is on a steady relationship with Bangladesh for the past few years, thanks to Sheikh Hasina.

Her action against groups inimical to India’s interests active in her country helped in regaining India’s confidence and trust missing for a long time. Today, India is a major partner in its fight against terror and development. India and Bangladesh are cooperating on a wide range of issues including security, trade and commerce, connectivity, energy, environment, education, science and technology and etc.

Bangladesh is also important to partner with India in progress regional cooperation. Bangladesh has been a key supporter of India in initiatives like BBIN (Bangladesh, Bhutan, India and Nepal) and BIMSTEC (Bay of Bengal Initiative for Multisectoral Technical and Economic Cooperation).

But will China-Bangladesh relationship upset India? Till date, Prime Minister Shiekh Hasina has been successful in maintaining a balanced relationship with both the countries. After she formed the government in 2009, Hasina visited India and China. Also, she was seen cutting down the country’s dependence on the Chinese arms by diversifying the source of arms. In 2013, she gave a billion dollar contract to Russia, one of the country’s biggest arms contracts.
However, Bangladesh procuring the submarines from China has been an issue of scepticism for the security analysts in India. After Xi’s visit, the scepticism has further deepened, particularly, with China and Bangladesh elevating their relationship to a strategic partnership. Clarity on the nature of this partnership will be helpful in reducing tension.

Bangladesh foreign policy observers are divided on the nature of the partnership. Some of them strongly argue in favour of keeping it to economic ties. While some favour inclusion of defence in the partnership.

A defence partnership might have ramification for India since it might give China access to the Bay of Bengal, which has been India’s backyard for long. Many of India’s strategic assets are located on the east coast close to Bangladesh. When Chinese President described Bangladesh as a key partner in South Asia and the Indian Ocean, it was sure to rankle India. The Indian Ocean is a considered India’s sphere of influence and China is looking for increasing its presence in the reason.

Also, Bangladesh officially joining China’s One Belt One Road (OBOR) made India sit up and take notice. Convincing Bangladesh to join OBOR was major challenge for Jinping. India has hesitation on the OBOR initiative because the projects under it in Pakistan run into the disputed territory over which India claims sovereignty.

With Bangladesh joining the OBOR, India is in a fix. Bangladesh is expected to receive investment from China to develop its infrastructure necessary to strengthen the connectivity in the region. The BCIM (Bangladesh, India China and Myanmar) sub-regional cooperation has been included in the OBOR and India is a major partner here.

Bangladesh argues that its engagement with China will also benefit India. The Infrastructure that the country will develop can also help India to establish connectivity with East Asia.
The role of Prime Minister Shiekh Hasina will be critical in deciding the course of the country’s relationship with India and China. The country needs China for economic development since it can provide the finances. Similarly, Bangladesh needs India for its fight against terrorism, one of the critical challenges facing the country. Hope is Sheikh Hasina, a proponent of peace and development, will not upset the equilibrium.

To avoid such scepticism Prime Minister Sheikh Hasina has to show uniqueness in framing her foreign policy which will be innate to Bangladesh and will be helpful in gaining the confidence of all the countries enabling to maintain an equal relationship with both India and China.