Silence Of The Lambs

From allocations for schemes to managing expectations, Budget 2015 will test Modi’s idea of cooperative federalism. 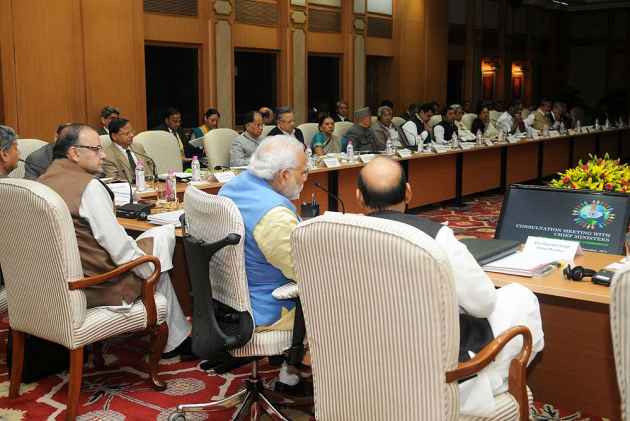 The states will undoubtedly take any bad news for social sector schemes in Jaitley’s maiden full budget in the right spirit—badly. They already want bigger shares of central tax revenues. Unfortunately, tax collections are not healthy. The latest numbers tell an altogether alarming tale: indirect tax collection rose 7.1 per cent in April-November 2014. Within this, excise collections, which express economic activity more directly, dipped 0.2 per cent. Besides, as the finance ministry itself noted last December, a massive expected revenue shortfall of nearly 0.8 per cent of GDP looms. That’s Rs 1 lakh crore less than the government hoped.

Jaitley has said little on how his number crunchers are dealing with this aspect of his budget. He has mostly expressed confidence in meeting the fiscal deficit target of 4.1 per cent of GDP. Often, by meeting this target, governments try to project an economy in fine health. This is not strictly true. For instance, with excise cuts for the auto sector out of the way, the picture may improve on paper, without any additional economic activity. This should make states stand up and pass notes to the centre while they await ‘Make in India’ and ‘Swachch Bharat’.

The fisc is merely the shortfall between revenue and expenditure as a percentage of GDP. In short, number crunching and one-off receipts may improve this figure, without saying anything about economic revival. Besides, it’s easy to forget that deficit targets are not just for New Delhi. Reluctantly, states have been clamping down on their own deficits—and they are quite unhappy about it.

In any case, a better indicator of the economy’s health is its tax revenues, not divestment proceeds, nor one-off auction receipts. In the end, the Finance Ministry may approach this target more conventionally. Spending curbs—old-fashioned belt tightening—are any government’s final recourse but more so now, as economic growth sputters up with little to fall back on.

To convince Naveen Patnaik or Chandrababu Naidu to spend less money on assuaging their already poor electorate will be a tough job—one that requires all the cooperative federalism the now-extinct Planning Commission might have rattled together. Budget 2015, therefore, will be a big test for cooperative federalism, not just in terms of allocation for schemes, but also in managing expectations.

The shift from planning to policy indicates huge new opportunities for corporate India to invest their money—but that, precisely, is where so-called jhola-walas object. Causes that jhola-walas espouse affect voters, and if they fear the worst from Jaitley’s budget, one can be sure that after the budget even the most market-friendly chief ministers will go home unhappy. For instance, health activists in Maharashtra say spending cuts means more private sector health centers than free or subsidised public ones. Similar concerns raised by job-guarantee activists have gone unanswered. Negative buzz around spending cuts in the run-up to Jaitley’s first full budget are probably causing sleepless nights in North Block too—they are just not saying so.

Another mistake would be to view the silence of states as the silence of happy lambs. For instance, a recent central move to hike excise duty on petroleum went without a whimper or a whine. In fact, states accepted this because they know the overall tax pie needs to grow for their own slice to grow. That is good news for the Modi-Jaitley duo, but the bad news follows—everybody needs money and the members of this cooperating federation want more, much more.

For several years the one-third share in central taxes that states get has been seen as inadequate—they want a half share. The centre has turned them down flatly through several finance commissions, and changing the formula for allocating taxes doesn’t seem on the agenda.

It appears that after PM Modi talked up the economy, FM Jaitley will try to talk down the fiscal.