Singing In The Face Of Blows

I’ve been a teacher at Jadavpur University for 25 years, and a student before that, and I have never witnessed something so grim, so appalling on this campus as happened last night. 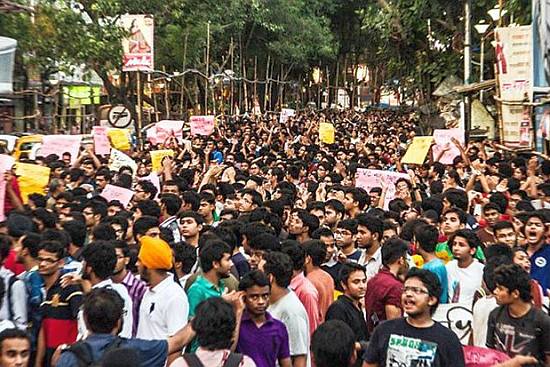 [Singing in the face of Blows
This is what Jadavpur Shows]

This was the slogan with which Jadavpur University students led the march from JU to Gol Park today.

I’ve been a teacher at this university for 25 years, and a student before that, and I have never witnessed something so grim, so appalling on this campus as happened last night.

I write with a heavy heart.

Never, in all these years have students been laathi charged on campus by the police in the dead of night.

Never has this university, that has taken such pride in its student teacher relationships, switched off its lights to leave its students in darkness—and to be beaten up.

Never has it witnessed booted police, or chappal clad outsiders in plain clothes, attacking our young women, pulling them by the hair, walking over their bodies, tearing off their clothes, and then staring at one even as she tries to pull a friend’s shirt over her head to cover her self.

Never have students here been told that it is “beneath one’s dignity” to talk to them, been denied even a hearing.

Today is different. This is what the media is showing us today, this is what our students are telling us happened today.

Yet, never before has the need for a fair and adequate trial for the sexual harassment of a woman been demanded so firmly here, so unitedly by so many students, male and female, across so many ideological persuasions and so many political positions.

For never before have so many sensitive young women come to the fore, on campus and on television, in such calm, powerful and intelligent articulation of their claim to dignity.

On principle I firmly oppose a gherao of teachers and administration by students. Such forced confinement is wrong.

I am proud of our students who so determinedly protected each other at the cost of severe injuries to themselves, who resisted the violent attacks en-masse, but did not attack en-masse.

I am proud of our students who led the march today chanting: