Complementing Laxman's 73 that allowed India to set a target of 402, Sreesanth (3-47) rattled the Safs once again to push them closer to defeat at 163-5. Kerala seamer S Sreesanth produced yet another lively spell of fast bowling to expose the chinks in the South African batting and bowl India to the brink of a rare overseas win in the first Test today.

Set a daunting fourth innings target of 402, South Africa were looking down the barrel at 163 for 5 at close on the third day at the Wanderers.

The hosts were down to their last recognized pair of Ashwell Prince (54 n.o.) and wicketkeeper Mark Boucher (23 n.o.) with another 239 runs needed for victory.

With two full days play remaining, a result is assured.

Should India manage to win tomorrow, or the last day on Tuesday, it would be only their first ever in South Africa and 27th on foreign soil from 194 matches, a staggering low percentage of 13.47 of win abroad.

Sreesanth, as in the first innings, was the hero again, capturing 3-47 wickets from 17 lion-hearted overs, bowling consistently over 140 kmph even at the fag end of the day.

After Zaheer Khan gave the opening breakthrough, having Herschelle Gibbs caught for nought in the first over of the innings, Sreesanth got into the act and picked up the next three wickets of Graeme Smith (10), Hashim Amla (17) and Jacques Kallis (27).

AB de Villiers was then run when he went for a non-existent run to plunge South Africa into crisis.

Laxman featured in an impregnable stand with Zaheer Khan (37) of 70 runs from nearly two hours, helping the Indians take an overall lead of 401 runs.

The visitors, resuming at overnight score of 146 for 5, lost the wickets of Mahendra Singh Dhoni (18) and Anil Kumble (1) early but then capitalised on an unimpressive bowling performance.

The hosts, with the exception of Shaun Pollock, rarely bowled on to the stumps as the Indians grafted their way to 90 runs in the morning session. 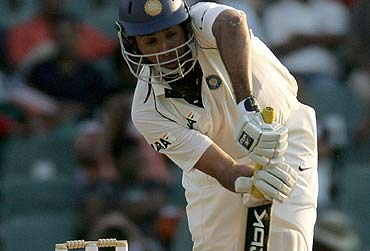 Zaheer was the surprise packet as he presented a straight bat and concentrated hard in allowing Laxman to prosper.

Smith, in desperation, brought himself on to the attack and Zaheer replied by first smashing him for a six over widish mid-wicket and later cutting him for four.

In the four balls possible before lunch break, South Africa lost Gibbs who edged a catch to Sachin Tendulkar in the slips off Zaheer for nought.

The afternoon successes were reserved for the first innings bowling hero Sreesanth who first fooled Smith into chasing a widish delivery and then had Amla in more conventional manner behind the stumps.

Smith (10) played an atrocious shot for a beleaguered captain by slashing at a wide delivery and Virender Sehwag at point took a good catch diving to his right.

Amla (17) then played at an away delivery from his stationery position and edged a catch behind the stumps.

Kallis had difficulty in coming to terms with the difficult wicket as repeatedly Indian medium-pacers got the ball to bounce from an awkward length.

Even Sourav Ganguly, turning his arm over for an over, hit Kallis on his chest with a delivery which jumped.

Prince was his usual stodgy self and played within his own limitations though he too had his moments of discomfort against rising deliveries on his off-stump.

Kumble was brought on to bowl a few minutes before the break and would be the key man for India when the ball has lost its shine and hardness.

Like so many silly dismissals, South Africa experienced one more outrageous loss when AB de Villiers (17) took off for a non-existent run and was ran out by Zaheer at mid-on.

Prince, amidst this all, stood his ground and in between playing and missing deliveries, struck some crisp shots down the ground.

A single off Sreesanth in the final half hour saw him chalk up his eighth Test fifty, made from 136 balls in 197 minutes with four fours.

Prince has so far batted for 218 minutes and hit five fours from 148 balls for his 54 runs. Boucher, his partner, has batted for 68 minutes and 33 balls and hit three fours in his 23 runs. Their partnership is so far worth 43 runs.