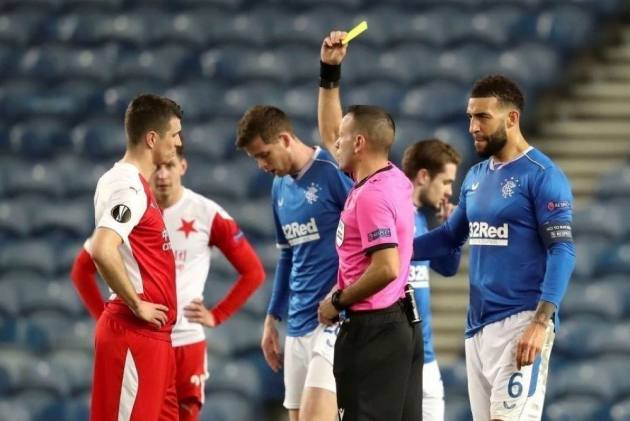 Scottish champions Rangers lost 2-0 at Ibrox – their first home defeat of the season – to seal a 3-1 aggregate defeat in the round-of-16 tie.

Yet Slavia's victory was marred by a late incident in which Kudela, who covered his mouth with his hand, seemingly said something that aggravated Kamara and his team-mate Bongani Zungu, who was stood nearby.

The flashpoint escalated into a tussle between both teams, with a long stoppage following before play resumed.

Steven Gerrard spoke to his counterpart Jindrich Trpisovsky on the pitch at full-time and then later on the touchline, along with officials from each club and UEFA.

In his post-match news conference, Gerrard subsequently confirmed that Kamara alleged to have been racially abused by Kudela, asking UEFA to take swift action.

SG: One thing for me that is non-negotiable is my support for my players. I'll always be side-by-side with my players and be the biggest support I can be.

Slavia firmly denied the allegations and reported their player had been attacked following the game, saying police were called.

The Czech club have now reiterated that stance, insisting they stand against any form of prejudice, while backing Kudela's character.

Slavia also pointed out incidents within the match that saw both Kemar Roofe and Leon Balogun sent off for Rangers.

Roofe saw red for a high boot into the face of goalkeeper Ondrej Kolar, who had to be replaced and on Friday morning was confirmed to have suffered a frontal sinus fracture.

"The firm commitment to fight racism, xenophobia and all forms of hatred is one of the pillars of Slavia football policy," a club statement read.

"Any form of racial discrimination is contrary to our values and principles and we shall never tolerate such conduct.

"We are a club where all enjoy fair chance regardless of their race, colour, religion or beliefs. The modern Slavia is a fully multicultural team and even our hardcore fans wear jerseys of all players without exceptions.

"The second leg of the round of 16 of the Europa League between Slavia and Rangers was supposed to be a celebration of football as such. Our players faced excessively heavy-handed behaviour instead.

"Rangers injured Slavia goalkeeper Ondrej Kolar with a reckless tackle and other players were lucky not to be injured. Anyone who watched the game has surely formed their own opinion.

"Ondrej Kudela is one of the team captains elected in secret polls by the players who choose characters that enjoy their trust.

"He is a decent and modest person with a strong moral integrity, popular amongst the players and fans, a football gentleman. He categorically denies and refutes any allegations of racism.

"We are shocked that his reputation and the club's reputation are being smeared without a single piece of evidence. The only 'alleged' evidence is the player covering his mouth – which Ondrej does on a regular basis when he talks to his team-mates during our games."

Slavia went on to detail that Kudela had been "physically abused" by Kamara, and the club are considering filing a criminal complaint.

"Under the patronage and in the presence of the UEFA delegation, the coaches of both teams, Ondrej Kudela and Glen Kamara met," the statement continued.

"After the arrival of Slavia representatives, Ondrej was physically abused by the player of Rangers who then fled into the locker rooms followed by the manager Steven Gerrard without a single word of apology.

"The incident is thoroughly described in the match protocol and Slavia will consider filing a criminal complaint after their return to the Czech Republic.

"The movement of Slavia players and management was unprecedentedly restricted after the game. The players and staff were protected by the Czech Embassy in London and local police. We would like to express our gratitude for their professionalism."

UEFA has confirmed an investigation will be opened.

"In accordance with the Article 31(4) of the UEFA Disciplinary Regulations, an Ethics and Disciplinary Inspector will conduct an investigation," a UEFA statement confirmed.