Art requires patience. The centuries-old traditional art of Kashmir has little patronage. Even the youngsters are not interested in picking up the family craft. Is Kashmiri traditional art dying a silent death? 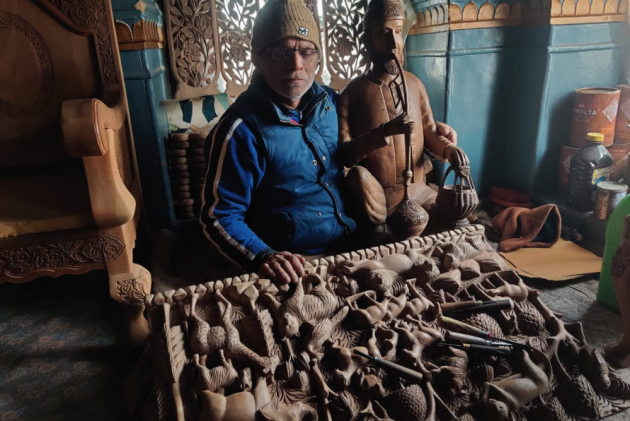 Amid the old-style houses, a narrow lane leads to a paradise wood house in the Narwara area of Eidgah. On the second storey of this old Kashmiri house, you find a specially-abled artisan at work, carving out from walnut wood, luxury products to be sold in the market at home and abroad.

At the one corner of the room sits an artwork of Saint George taming and slaying a dragon that demanded human sacrifices. In another corner, a portrait of a Kashmiri man smoking hookah. Also, at a corner stands a woodwork female bust. 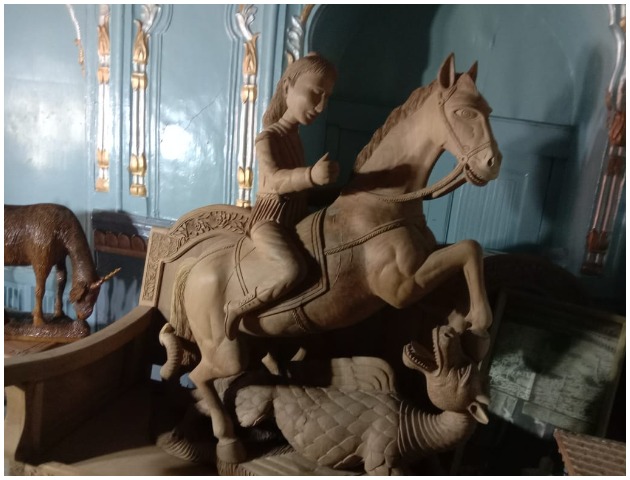 (A sculpture inside Yousuf's studio)

A carefully carved, walnut wood nesting table is set with four-season work all over. There's a roundtable with fine and intricate motifs, a dry fruit bowl with a lid, wall decor, a falcon ready to fly and panels made of a single piece of wood.

Artisan Mohammad Yousuf Murran can neither speak nor hear. His woodwork is an act of dedication to a craft his family has mastered over 200 years and passed on. His woodcarvings are stories chiselled and etched; narratives he otherwise can't voice.

Yousuf's nephew, Mudasir Ahmad Murran, who runs Paradise Wood House, says his uncle might be the only living artisan, who has attained perfection in wood carving in Kashmir.

“He has great accuracy and perfection and he was doing it since his childhood. He is a master craftsman,” says Mudasir while sitting next to his uncle.

Immersed in his work, Yousuf seems oblivious to his surroundings. His hands are busy at a panel on which he has been working for the past year. Mudasir shows an art piece of a Kashmiri man with a hookah in his left hand and a kangri (or a firepot that keeps people warm through winters) in his right hand.

Carved and polished to perfection, the piece is ready to sell.

"You will not find it anywhere in Kashmir," Mudasir brags. “Each product made by my uncle has been created with painstaking perfection," he adds.

As you look around, you realise, he is not exaggerating.

The products range from Rs 5 to 10 lakh mostly and are bought by foreigners and wealthy Indians.

Mudasir points at the Saint George figure. "This is made of a single piece of wood and is of much in demand in Europe because of the intricate artistry." Apparently, it took three years to be finished.

"Once polished, it will be priced at Rs 6 lakh," he says.

Kashmir has been the centre of art and craft over centuries and artists have been innovating to cater to changing tastes. Not too often, but at times, they also take time out to create from imagination.

Mudasir says he has seen how artists over the years have been exploited. “I am from an artisan family. My father and grandfather were doing this art for decades. And before the partition we had even a showroom in Karachi,” he narrates.

He says he has seen once the artisan completes his woodwork art a trader would visit him giving a small amount of money against the finished luxury item and then sell it in the market at a high rate. And an artist would get a pittance only,” he adds.

He says artists have several handicaps including lack of formal education and lack of exposure to the world and how much the world appreciates their products.

"The trader would come to them and take the artwork on the meagre amounts. If the artwork would be priced at Rs one lakh, the trader would procure it at Rs 20,000. Even getting that little money out would be a problem. But I decided I will change it. And I did so for my family,” he says. He bypassed the traders and started selling products made by artisans from home. Soon, Mudasir discontinued his education and started direct trade of the artwork made in his house.

“I started in 2004. It was a long traumatic journey. I went to Ahmedabad, I went to Mumbai, I went to Goa and I failed everywhere. I couldn’t sell the products myself. My family, my relatives would tell me I will not able to do it but I never gave up and ultimately I succeeded. I realised what is the market, where the market is and what kind of products we should come up with,” says Mudasir. 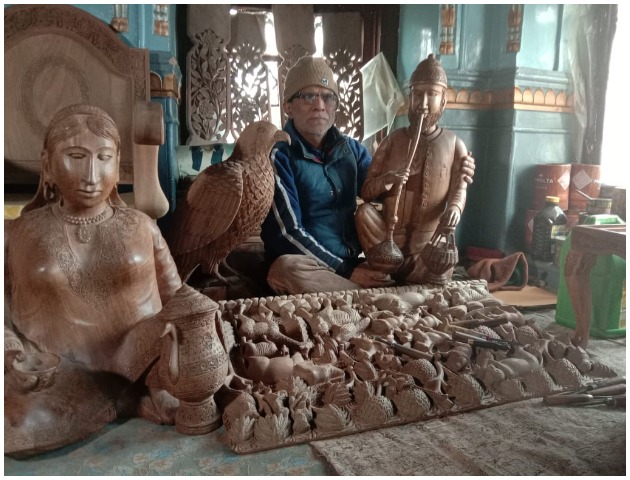 He says he himself has started making wood carving products. “I am still in the learning process. This is our family’s 200-year-old legacy and I have to learn it,” he adds.

In the room, a charcoal Bukhari is lit in the middle with many of his cousins sitting around. None among them is carving wood. They are students, in different colleges. Though they love to be around the artefacts created by Yousuf, they are not involved in carving.

Mudasir says the new generation has no patience.

“...and making these products needs patience. Art is all about patience,” he says. He says the government is also not showing any interest to promote woodcarving art. He says this art has no patronage in Kashmir.

“You see hotels coming up at a large scale, you see tourism flourishing, people visiting this place, and then you have to see why only artisans are dwindling in numbers. It is because artisans were never given their due and others lost interest in carrying it forward. Once an artisan dies here with him dies his art,” says Mudasir.

He says at present they have clients mostly from Chennai, Hyderabad, Ahmedabad and Mumbai. “A new class of super-rich Indians especially in the Southern States are really good customers with good taste and aesthetics. They love these products,” he adds.

Just a few meters from Mudasir’s house, another artisan Rouf Ahmad Bhat, 40, is seen working in his home in a small room. He is busy making chess pieces. There were walnut panels all around his room. He worked alone making and selling his products himself. In one of his rooms of a three-storey house he has kept different woodworks he has created over the years. Surprisingly, here too was the woodwork of the Saint George slaying Dragon.

He says such products are not made on orders as they usually had a demand in the market. “I am alone and how many products one person can make. Our problem is no one comes forward to learn this woodwork art. Youngsters will prefer to be salespeople and make Rs 7000 per month rather than making art. This work needs a lot of patience and no one has patience these days,” he says laughing.

He shows off the smiling Buddha and says they were making such pieces as they also had a market in European countries.

Rouf graduated in mathematics and then chose to master woodwork. “I was doing woodwork since my childhood. I saw my father Abdul Ahad Bhat doing it and I got interested in it and later I loved it,” he says.

He has also made woodwork statues of Omar Khayyam - the Persian polymath, mathematician, astronomer, historian, philosopher, and poet. “I am fascinated with Omar Khayyam and his story. That is why I made this woodwork. It doesn’t matter to me whether it sells or not,” says Rouf. “You cannot ask an artist why he created it,” he says.

Then he explains the piece inspired by Omar Khayyam. Here he shows Omar Khayyam reading under a tree to her beloved.

And there's another one of a man and woman kissing.