Despite the debt crisis, Europe has chosen to modify, not end, social welfare programmes

The eurozone crisis has unleashed a string of buzzwords— from rating downgrade to Grexit, referring to Greece’s potential exit from the zone. Yet one word is often missing: economic equality. Distinguishing the European Union from the rest of the capitalist world is its social-welfare programmes, and the crisis threatened to upend that broadly equitable economic system. But three years into the crisis Europe seems to have bitten the bullet and found a path to reforms that could allow the eurozone to maintain its social welfare state, albeit modified.

In the tumult of crisis and escape du jour, trends defining not only the future of the eurozone, but economic globalization, may have been overlooked.

Analyses and comments seldom mention that the countries in South European used membership of the eurozone as a cover. They borrowed to boost artificially high living standards. Profiteering creditors, both inside and outside the Europe, supported the unsustainable economic models. Greece borrowed from all-too-willing German and French banks to spend beyond its means. Cyprus adopted an irresponsible banking system, accounting for more than one third of its gross domestic product, more or less similar to offshore financial centres in the Caribbean, without scrutinizing origins of deposits from dubious investors. The eurozone rescued Cyprus after investments in Greek bonds failed, but penalized the investors. The financial world cried foul play, predicting a run on banks in Italy, Spain, Portugal and beyond.

But those banks bear little resemblance to those in Cyprus, and crisis may have been spurred by a few to protect profits.

As calm eventually returns for Cyprus, and even sooner for Greece, citizens and investors alike will realize they are better off inside the eurozone than outside. Exiting the eurozone would have confined them to permanent low growth before, during and after the crisis. 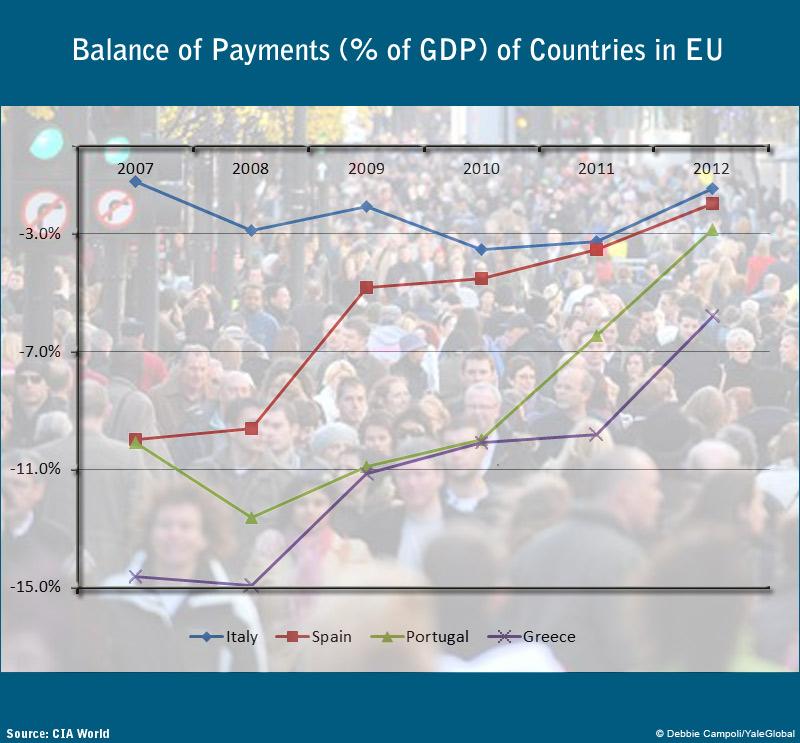 Balance of Payments (% of GDP) of Countries in EU.

Adjustment policies for the weakest member states are working. In 2007 Italy, Spain, Portugal and Greece all ran substantial deficits on the balance of payments. Now they are all close to balance albeit with Greece a bit behind— see graph. Wage and benefit costs have fallen dramatically since 2008 inter alia by 36 percent in Ireland, 22 percent in Spain and 17 percent in Greece. The trend throughout Europe is for shrinking budget deficits with the eurozone deficit cut from 6.2 percent in 2009 to 3.5 percent in 2012, with 2.3 percent forecast for 2013.

More fascinating, eurozone policies may be the most significant socioeconomic experiment since the introduction of the welfare state more than 60 years ago. 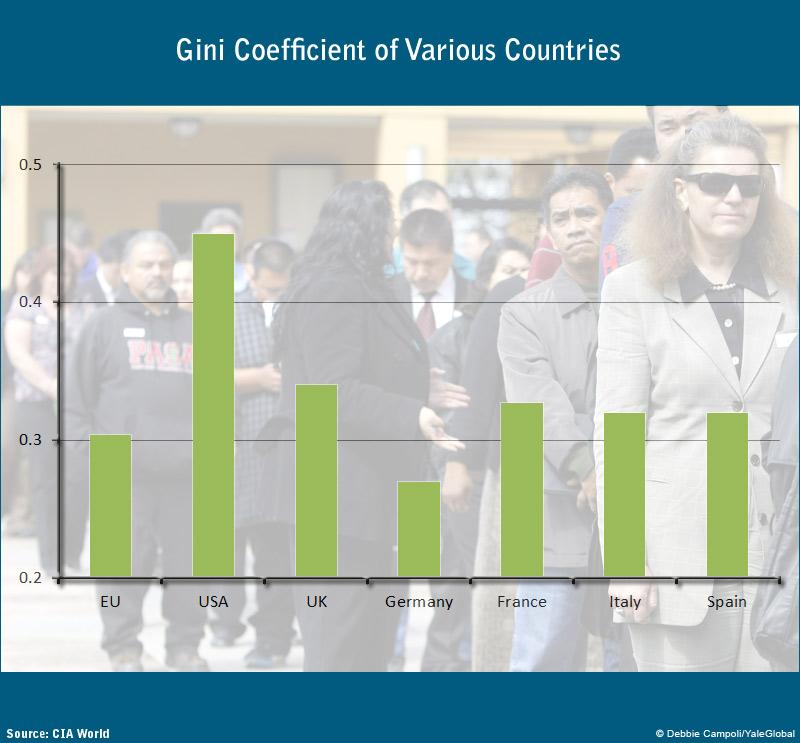 The welfare state brought to Europe a high degree of social and income equality. The Gini index measures the degree of inequality in the distribution of family income; higher numbers signify greater inequality: 0.307 for the EU, 0.34 for the UK, 0.45 for the US, according to the CIA World Factbook (see graph above). Economists disagree on inequality’s effect on economic growth— some argue it promotes growth, others insist it’s a barrier, but most would like to live in a country with a high degree of income equality as one of the main indicators for a high score on the human development index.

The Europeans should have known, but instead suppressed what the global economic recession disclosed: Revenues can no longer finance the generous welfare benefits. Privileges have allowed too many people to work too little, earning too much. Demographics turned against the welfare model, with a higher share of the population aged 65 years or more and a shrinking share of people working and paying. Eventually, investors, taxpayers and other cash cows revolted. Political power began to reflect the limits of how much the productive part of society could and would pay.

The reaction was astounding, a loud chorus pronouncing the death of the welfare model. But the doomsayers have since been proven wrong as the Europeans have launched a social economic enterprise around three pillars:

Governments trimmed expenditure levels and maintained the core of the welfare-state model. Most European nations have raised pension ages, which at first glance may not seem much. But such steps are, not the end of the road, but rather the beginning of a process and new mindset. Pension ages will gradually be hiked to reflect the need to keep people in the workforce longer and escape the demographic trap of a shrinking labour force. The four Southern European countries are now in the same age bracket for retirement as Germany (62.5 to 65 years). France is still in a lower age bracket, calling for further effort.

Restructuring the economic model with more mobility, including easier procedures for corporations to trim the number of workers, has been introduced. Trade unions once resisted such reforms, as seen in France during the mid-1990s. With union powers curbed, workers can merely delay or weaken proposals. Unions have begun to recognize that the wind has shifted, and they acquiesce to cuts, using what little power is left to insert conditions. Protests on the streets resemble a safety valve rather than efforts to force government’s hand.

Old-fashioned privileges guaranteeing jobs, employment and service-sector monopolies for a few have been discarded. This ride is not smooth. Those losing what they regard as well-earned privileges and rights are resisting. In some cases, they purchased licences in good faith, expecting to regain their investment by charging high prices. For example, Greek truck drivers paid for licenses that could gain worth if the industry is liberalized.

The reform process is incomplete, in some cases half-hearted, but continues because no one has offered an alternative way to pay for generous benefits with shrinking revenues.

The South European countries saw their wage and benefits rising fast within the eurozone relative to the countries in the north. The generous benefits were splendid for a while, less splendid when competitiveness started to bite. Now wages and benefits must be rolled back. The process is agonizing, but has ignited a turnaround in the balance of payments for those losing competitiveness during the years prior to the crisis.

These three pillars to restore economic stability are a bitter medicine, but most politicians and citizens see no other path— and do not want to pass monstrous debts onto future generations. Reforms for Europe may still go wrong, but so far they are working and with time, as economies recover, Europeans will see that their sacrifices were not in vain. Governments are shifting, but basic policies are not. It’s more likely that the eurozone will gain rather than lose members.

If successful, this political experiment has helped the Europeans to weather the storm. A sound foundation has been laid for an economic recovery that may take the eurozone back to a trend growth of, say, 1.5 percent. This may not be fantastic, but allows a higher living standard for a large majority of the population, thus preserving the model’s core: The Europeans recognize the value of income and social equality. This is what the fight is about.

Focus shifts now to momentum for ongoing policies to reform and restructure economies of Southern European and France, introducing a more flexible labour market, higher geographical mobility, more technology-driven industries, and an improved banking system— all at a European level. Judged by recent performance, chances are Europeans will pass the test.