'Society Is Protected By Something Greater Than Law: Humanity'

President Pranab Mukherjee's address to the nation on the eve of India's 69th Independence Day. 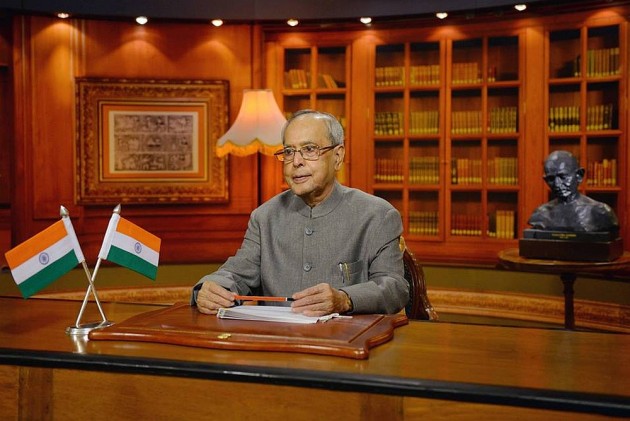 1. On the eve of 68th anniversary of our Independence I extend warm greetings to you and to all Indians around the world. I convey my special greetings to members of our armed forces, paramilitary forces and internal security forces. I also congratulate all our sportspersons who have participated and won laurels in various tournaments in India and abroad. My congratulations to Shri Kailash Satyarthi, Nobel Peace Prize winner for 2014, who has done the country proud.

2. On 15th August 1947, we won political freedom. The birth of modern India was a moment of historic exhilaration; but it was also tinged with the blood of unimaginable suffering along the length and breadth of our country. The ideals and convictions, that had held through the travails of an epic struggle against British rule, were under strain.

3. A great generation of supreme heroes faced this formidable challenge. The sagacity and maturity of that generation saved our ideals from deviation or degeneration under the pressure of emotion, including rage. India's pride, self-esteem and self-respect, born from a civilizational wisdom which inspired the renaissance that won us freedom, was distilled into the principles of our constitution by these extraordinary men and women. We have been blessed by a constitution that launched India's march towards greatness.

4. The most precious gift of this document was democracy, which reshaped our ancient values into a modern context and institutionalized multiple freedoms. It turned liberty into a living opportunity for the oppressed and impoverished, offered equality and positive discrimination to the many millions, who had suffered social injustice, and instituted a gender revolution that has made our country an example of progress. We abolished archaic customs and laws, and ensured change for women through education and jobs. Our institutions are the infrastructure of this idealism.

5. The finest inheritance needs constant care for preservation. Our institutions of democracy are under stress. The Parliament has been converted into an arena of combat rather than debate. It is time to recall what Dr. B.R. Ambedkar, Chairman of the Drafting Committee of the Constitution, said while making his closing speech in the Constituent Assembly in November 1949 and I quote:

"The working of a constitution does not depend wholly upon the nature of the constitution. The constitution can provide only the organs of state, such as the legislature, the executive and the judiciary. The factors on which the working of those organs of the state depends are the people and the political parties they will set up as their instruments to carry out their wishes and their politics. Who can say how the people of India and their parties will behave?"

If the institutions of democracy are under pressure, it is time for serious thinking by the people and their parties. The correctives must come from within.

6. Our country's rise will be measured by the strength of our values, but it will equally be determined by economic growth and equitable distribution of the nation's resources. Our economy promises much hope for the future. The new chapters of the 'India Story' are waiting to be written. 'Economic reforms' is a work-in-progress. Our performance over the last decade has been commendable; and it is most heartening that after a dip, we have recovered to 7.3% growth in 2014-15. But the benefits of growth must reach the poorest of the poor much before they land in the bank accounts of the richest of the rich. We are an inclusive democracy, and an inclusive economy; there is place for everyone in the hierarchy of wealth. But the first call goes to those who suffer on the brink of deprivation. Our policies must be geared to meet the 'Zero Hunger' challenge in a foreseeable future.

7. The symbiotic relationship between man and nature has to be preserved. A generous nature when violated can turn into a destructive force leading to calamities resulting in huge loss of life and property. Even as I speak, large parts of the nation are barely recovering from floods. We need immediate relief for the afflicted as well as long-term solutions for the management of both, water deficiency and excess.

8. A nation which forgets the idealism of its past loses something vital from its future. Our educational institutions multiply as the aspirations of generations continue to exceed supply. But what has happened to quality, from base to apex? We recall the guru-shishya parampara with legitimate pride; why then have we abandoned the care, devotion and commitment that is at the heart of this relationship? A guru much like the soft and skilful hands of a potter, moulds the destiny of shishya. The student with devotion and humility acknowledges the debt of the teacher. Society respects and recognizes the merit and scholarship of the teacher. Is that happening in our education system today? Students, teachers and authorities must pause and introspect.

9. Our democracy is creative because it is plural, but diversity must be nourished with tolerance and patience. Vested interests chip away at social harmony, in an attempt to erode many centuries of secularism. In an age of instant communication through ever-improving technology, we must remain vigilant to ensure that the devious designs of a few never overcome the essential oneness of our people. For both government and people the rule of law is sacrosanct, but society is also protected by something greater than law: humanity. Mahatma Gandhi said and I quote: "You must not lose faith in humanity. Humanity is an ocean; if a few drops of the ocean are dirty, the ocean does not become dirty" .

10. Peace, friendship and cooperation bind nations and peoples together. Recognizing the shared destiny of the Indian sub-continent, we must strengthen connectivity, expand institutional capacity and enhance mutual trust to further regional cooperation. As we make progress in advancing our interests globally, India is also engaged in pro-actively promoting goodwill and prosperity in our immediate neighbourhood. It is heartening that the long pending land boundary issue with Bangladesh has been finally resolved.

11. While we offer our hand willingly in friendship, we cannot stay blind to deliberate acts of provocation and a deteriorating security environment. India is a target of vicious terrorist groups operating from across the borders. Except the language of violence and the cult of evil, these terrorists have no religion and adhere to no ideology. Our neighbours must ensure that their territory is not used by forces inimical to India. Our policy will remain one of zero tolerance for terrorism. We reject any attempt to use terrorism as an instrument of state policy. Infiltration into our territory and attempts to create mayhem will be dealt with a strong hand.

12. I pay homage to the martyrs who made the supreme sacrifice of their lives defending India. I salute the courage and heroism of our security forces who are maintaining an eternal vigil to safeguard the territorial integrity of our country and the safety of our people. I also specially commend the brave civilians who boldly detained a hardened terrorist ignoring the risk to their own lives.

13. India is a complex country of 1.3 billion people, 122 languages, 1600 dialects and 7 religions. Its strength lies in its unique capacity to blend apparent contradictions into positive affirmations. In the words of Pandit Jawaharlal Nehru, it is a country held together and I quote: "by strong but invisible threads….. About her there is the elusive quality of a legend of long ago; some enchantment seems to have held her mind. She is a myth and an idea, a dream and a vision, and yet very real and present and pervasive".

14. On the fertile ground laid by our Constitution, India has blossomed into a vibrant democracy. The roots are deep but the leaves are beginning to wilt. It is time for renewal.

15. If we do not act now, will our successors seven decades hence remember us with the respect and admiration we have for those who shaped the Indian dream in 1947? The answer may not be comfortable, but the question has to be asked.