6-Year-Old Boy From Mizoram Runs Over Chicken Accidentally, Rushes It To Hospital With All His 'Savings'

The photo of the boy from Sairang, Mizoram was shared on Facebook by a user named Sanga Says along with the caption explaining the incident. 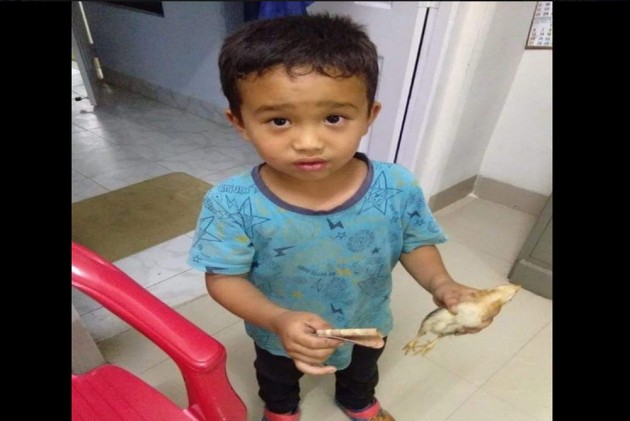 In a heart-warming story, a Facebook post has gone viral in which a little boy accidentally ran over his neighbour’s chicken with his bicycle. After the little boy realised his mistake, he rushed the hurt chicken to the nearest hospital with all the pocket money he had.

The photo of the boy from Sairang, Mizoram was shared on Facebook by a user named Sanga Says along with the caption explaining the incident.

The post reads: “This young boy from Sairang, Mizoram, accidentally ran over his neighbour’s chicken with his cycle. He took the chicken, ran to the nearest hospital and with all the money he had, asked for help. (I’m laughing and crying all at the same time)". 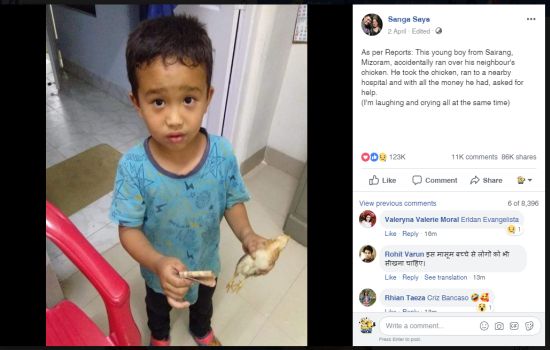 Speaking to Outlook, Sanga said, "The photo and the story was being shared around via WhatsApp. I got it from a friend and decided to share the story on Facebook and Instagram. Later I dug around for details and verification and I managed to speak to the boy's father."

"The boy's name is Derek C.Lalchhanhima. He's 6 years old and studying in Class 1. His mother is Lalnunpuii and his father, Dhiraj Chhetri. His father works in the police force and are currently posted in Sairang, Mizoram," Sanga added.

"According to the father, the boy came home with the neighbour's chick that he had accidentally killed. He does not understand that the chick is dead and begged his parents to take the chick to the hospital. His father told him to go himself, which he did with ten rupees. Later he came back sobbing, saying that they didn't help the chick but only took his picture with the chick and his money. He vowed to go back carrying a 100 rupees. His parents finally had to explain to him that the chick is dead and that there's nothing they can do at the hospital. His father says that he was as surprised to see his son act this way and did not expect him to actually go to the hospital or that the picture they took of him will go viral. "He's always been a rather unique kid." he adds.

The post, however, was shared extensively by Facebook users and went viral in minutes with more than 86,000 shares.