The elephant's fate would depend on what the police inquiry reveals. 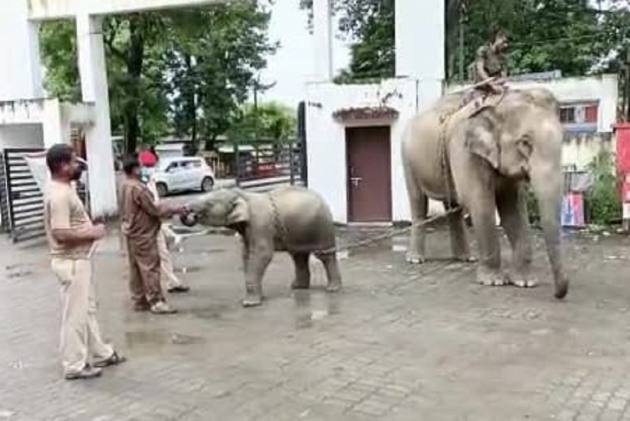 He still cannot get over the sight of 10-month-old Lakhimi in chains even a day after she was taken away along with her mother Dulumoni by the Bokakhat police in Golaghat district. “Till now I had never tied her up,” says Jiten Gogoi, former Bokakhat MLA -- 2001 and 2006 -- and owner of the mother-daughter pachyderm. “It broke my heart seeing her being taken away like that,” he tells the Outlook.

Dulumoni is accused of killing a 14-year-old boy Bitu Gaud from Naharijan tea estate recently following which there was a public outrage. The police registered a case under Section 304A (causing death by negligence) of the Indian Penal Code, seized Dulumoni and Lakhimi on Thursday and handed them over to the authorities of Kaziranga National Park. Police said they would investigate and submit a report.

Ramesh Gogoi, DFO Kazrianga , said the police had handed over the elephants to them for custody since they cannot keep them at the police station. “They are healthy and keeping well,” he said adding that their fate would depend on what the police inquiry reveals. “Till then they will be in our charge,” he said.

Field director of KNP P Sivakumar said the forest department would also make its own inquiry. “The chief wildlife warden is the owner of the elephants and the ‘owners’ are actually guardians,” he said. “As guardians they are responsible for the safekeeping of the elephants as well as humans around,” he said. “We have also asked for the duo’s health check-up,” he said.

According to Jiten Gogoi, the deceased boy had disturbed Lakhimi scaring her after which Dulumoni attacked him. “It was at the instigation of some persons that residents of Naharijan tea estate virtually laid siege to my bungalow in my tea garden and even pelted stones,” he said adding that he has also lodged a police complaint in this regard. “I hope they look after Dulumoni and Lakhimi well and return them to us soon,” he said.

The DFO said that animals are very possessive about their calves. “If, indeed, the boy had disturbed Lakhimi then it would have been natural for the mother to react because she would have felt apprehensive about the calf coming to harm,” he said. “She doesn’t appear to be the aggressive type,” he said.

Jiten said 22-year-old Dulumoni has been associated with the Kaziranga National Park for the past 10 years as part of the elephant safari and had never caused any problem.

“It was only a couple of months ago that Naharijan tea estate workers had taken Dulumoni, Lakhimi and my two other elephants to participate in a religious function during which they even washed the feet of the elephants; so many people attended, but none of the elephants created any problem,” he said.

“I had six elephants and I have every record of theirs starting with birth certificates. Two died and I have their death certificates, too. Besides, I have had kundalis made by the pundits of each one of them,” he said.