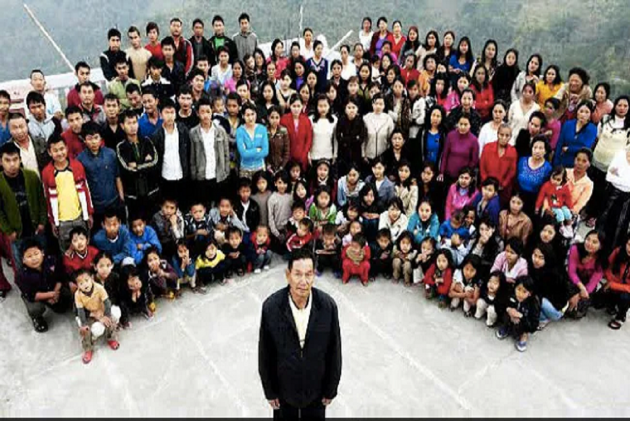 The head of the world's largest family, Zionghaka aka Zion-a, died at a hospital in MIzoram on Sunday. He was 76 and is survived by 39 wives, 94 children and 33 grandchildren.

"Zion-a was suffering from diabetes and hypertension. He was undergoing treatment at his residence in Baktawng village for three days. But his condition deteriorated and he was rushed to the hospital, where doctors declared him brought dead," Hospital Director Dr Lalrintluanga Zahau said

Zion-a was the leader of Chana Pawl or Chhuanthar, a sect formed by his grandfather Khuangtuaha after he was expelled from Hmawngkawn village in 1942.

Since then, his family lives in Baktawng village,around 55 km from Aizawl. Khuangtuaha was succeeded by his son Chana, who was the father of Zion-a.

Around 400 families are members of the sect that allows polygamy for its male members.

Zion-a's four-storey mansion at Baktawng is a major tourist attraction. The family has been featured twice by 'Ripley's Believe it or not' in 2011 and 2013.