The HOPE project has been working towards turning dreams into reality. 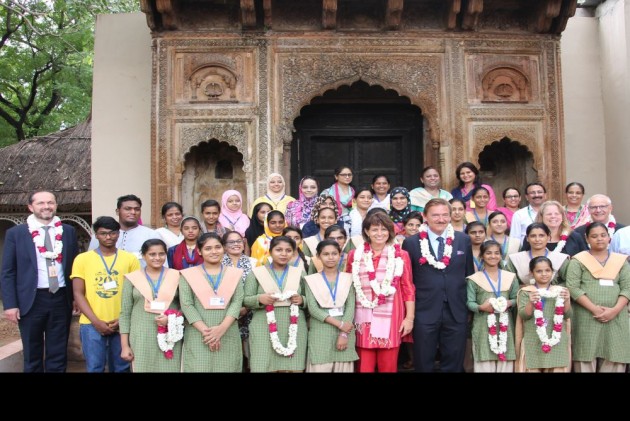 What comes to your mind when you hear HOPE for the first time? For a blind person, it’s a chance to see. For a needy person, it’s a helping hand. For a child, it’s a support system, arms stretched out, ready to believe in them.

One such ray of hope is the HOPE Project that works in collaboration with the Centre for Catalyzing Change (C3) Unniti Small Grants Program which works towards providing education to children from underprivileged sections for their better future.

The HOPE Project works from Nizammudin Basti and they have opened a school in the area where the kids are given basic primary education and are taught to develop various skills. In the first batch of boys in an all-girls school were three children- Sohail, Nimesh and Kunal.

“Nobody knew where the kids were from. The kids, when they came for the first time, had this apprehension, fear of rejection and being stigmatised. But with time, they got over the anxiety and the fear and have come out as amazing photographers and dancers and are now working towards achieving their dreams. Children who could not even think of going to school are now giving university exams.”, says Richa Sundra, Manager of the Centre for Catalyzing Change Foundation.

"We at C3 Unniti Small Grants Program believe in the philosophy of redefining the conventional process of grant giving with a spirit of co-travelling with our partners. The support is small, yet highly effective in building and supporting programs , building the capacity of the organisation towards sustainability and supporting women and girls to develop their full potential", says  Dr. Aparajita Gogoi, Executive Director, Centre for Catalyzing Change.

Sundra and Samiur Rahman, Executive Director of The Hope Project foundation, came together, and brought three boys from an NGO named Katkatha, who help women and children living in the brothels of GB Road, New Delhi, to Hope Project, for an experiment, to secure a better future by bringing those children into the mainstream education.

“The mandate was that we wanted to transform the lives of the children, not even change them. Till date, we have mainstreamed the lives of about 14,000 children. A very important landmark is 37 children from Hope, are going to the university, so you can well imagine the next generation”, Rahman adds. “Over the years we have been able to win the confidence of the community and others, especially the parents, and the guardians. This kind of population has a different kind of history and story. Its 3 years, now that boys are included in as well.”

Rehman says, “My kids have been to the children’s parliament, and last year they were even nominated to meet the Swiss president, and one of them spoke before the Swiss president. I accept challenges and I do it. Fear is nothing, and fear can never stop me from doing something correct.”

Nimesh, one among the three boys, says, “We have been here for five years. The best thing that I like about HOPE Project is the unity here. When we first came here, we were a little anxious since we never went to a proper school before. But when we started spending time here, we started liking the place a bit more. And now, this is our favourite.”

Nimesh’s one talent that he found during his time here, was photography. “I recently had my photos shown in an exhibition here which was held for two days. I also made a documentary on the red light area of Delhi, which was awarded the first prize. I bought a camera with the prize money”, he happily adds.

Its stories like Nimesh’s that show that all that a child needs is someone who believes in them, and encourages them. It’s organizations that the C3 Unniti Small Grants Programme and the HOPE Project that make it happen.