The newly opened experiential museum "Icons of Nationalism: From the Soil of Bengal" in the National Library at Alipore celebrates the essence of Bengali nationalism and Bengal's icons who dedicated their lives to India's freedom from the colonial rule 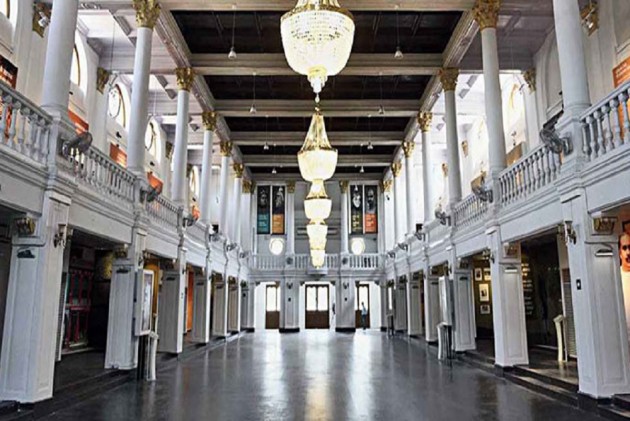 Visitors to the National Library of India and the Metcalfe Hall here can now acquaint themselves with the inspiring lives of four Bengali icons -- Bankim Chandra Chattopadhyay, Rabindranath Tagore, Subhash Chandra Bose and Syama Prasad Mookerjee -- and the sights and sounds of the City of Joy.

The newly opened experiential museum "Icons of Nationalism: From the Soil of Bengal" in the National Library at Alipore celebrates the essence of Bengali nationalism and Bengal's icons who dedicated their lives to India's freedom from the colonial rule. The museum has been set up by the Union Culture Ministry.

The museum, equipped with reciprocal installations like interactive walls, immersive projections, touchscreen panels and audio-visual installations, is an attempt to inspire the youth. One can visit the museum between 10 a.m. and 6 p.m.

While the flame of nationalism was ignited all over the country, Bengal was the main theatre of the struggle for freedom from the British imperialism. The soil of Bengal nurtured many nationalists and certain personalities became the flag bearers of freedom, and thus the 'Icons of Nationalism'. "Whether through their pen, paintings, music or actions, they often charted a path for the independence movement," the developing companies Tagbin and Expression said.

At the digital museum, on view is archival material like original letters written by these personalities, literature, newspaper clippings, documents and archival footage, Tagbin told IANS.

The materials have been sourced from the National Archives of India, the Nehru Memorial Museum Library (NMML), Bankim Sangrahashala and the Dr. Syama Prasad Mookerjee Research Foundation, among others.

The Metcalfe Hall at the crossing of Hare Street and Strand Road is also hosting an experiential exhibition titled "Ami Kolkata" (I am Kolkata), which sheds light on Kolkata as the city of stories, surprises, memories, cultures, celebrations, influences and confluences. Each aspect is detailed out as a zone.

A selection of vintage prints and paintings on the bond between the Hooghly river and the city's contemporary scenes, inspired by traditional Patachitra art, are also on view.

In the "City of Celebration" zone, a traditional Durga idol building scene and installations of a Bengali wedding can be viewed. A gallery of paintings, music, cinema, dance, theatre, visual culture and literary art also await visitors as well.

The last zone presents soundscapes from streets, an ever-present backdrop to the life in the city. Both the exhibition and the museum were opened by the West Bengal Governor Keshari Nath Tripathi on Friday.