The self-tutored young Hip hop dancers from Burari are now making their way on to national stages, with their eyes firmly set on international championships in the near future. 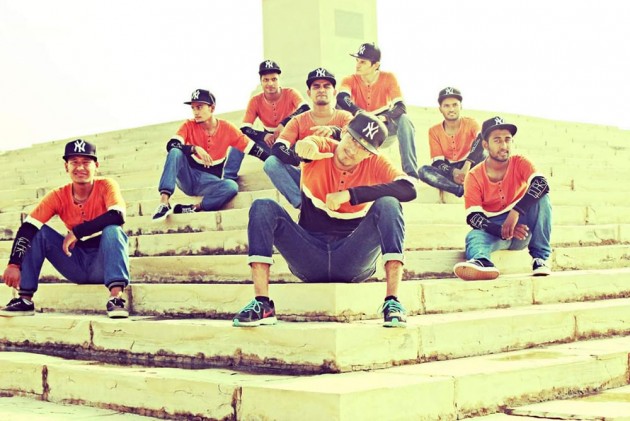 When we first spoke to 24-year-old Sandeep from Burari over the phone, we came across a rather reticent and shy voice. We requested him to let us know when we could meet over the weekend. “Main aapko kal confirm kar du?” (“May I confirm the time tomorrow?”), he asked. He ended up confirming the plan much before the day had ended. The second time, he definitely sounded more confident. The third time he spoke to us was when we met him — by then, the conviction in his voice was louder, as he welcomed us into his studio where a Hip hop rehearsal session was in full swing.

“We only set this up a few months ago. My friend and fellow Hip hop artiste Kamal has taken it on rent for 10,000 rupees a month,” he said as we made our way into their studio on the second floor of the building with dusty, dark corridors showing us the way. The moment we entered the room, the beats of rap music synchronised with our footsteps and heartbeats. We didn’t even notice that we had started to tap our feet while setting up our equipment close to where they danced, without making conversation with each other or engaging in meaningless banter. Hip hop was serious business.

“We rehearse for at least ten to twelve hours every day, which is not including the classes we conduct at our homes or in schools and academies,” says Deepak, a 22-year-old Hip hop dancer who goes by the name ‘B-Boy Kaku’ in his circles. He teaches gymnastics to kids as well. Deepak’s father works at the Ajmere Gate of the New Delhi Railway station and moonlights as a security guard. The story isn’t too different for his fellow dancers — while one’s father is an electrician, another’s brother paints homes and furniture. Some belong to families where everyone works three jobs to make ends meet. For these youngsters from North Delhi’s immigrants’ colonies of Burari, their dance has been ammunition against circumstantial adversities. It’s their war cry.

“It’s a village area and despite some development, people continue to have a conservative outlook,” says 22-year-old Rajesh. He runs to the little water filter tucked away in the corner of the room and gulps down a few glasses before sitting down on the plywood floor to have a conversation with us. “Parents here still believe opportunities lie in the regular 9-5 jobs. Be a doctor, police, government employee or an engineer. But now, after we started seriously pursuing Hip hop, we can see them encourage their children to pursue different things. But that’s happened almost a decade after we started in school. We used to practise on the streets initially, now we have a studio. This has given people some hope,” he smiles.

The horror stories of this infamous neighbourhood are well-known. From being plagued by some of the worst civic amenities, or the complete lack of them, with homes flooding with gutter trash every monsoon, to a family of eleven killing themselves under mysterious circumstances, Burari has made its place on the national map for all the wrong reasons. But perhaps, a twist of fate for the locality isn’t too far. These self-tutored young guns are now making their way on to national stages, with their eyes firmly set on international championships in the near future. 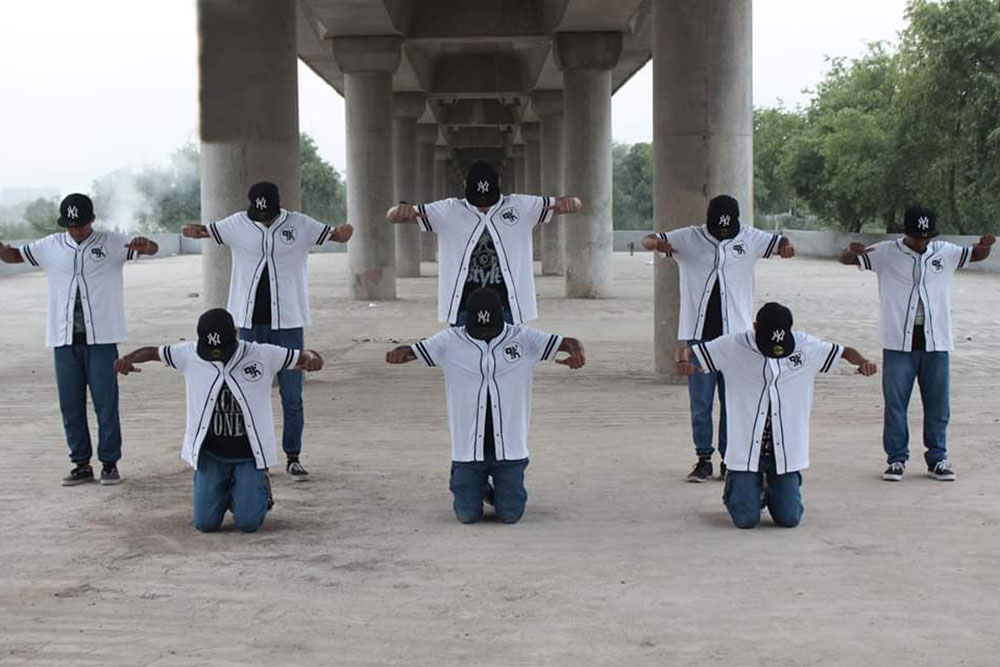 “When we started off, we would practise on the pavements of Connaught Place and people would ask where Burari is. We’d have to tell them it’s beyond GTB Nagar because they had no idea about it. Now they know where Burari is when they see us perform,” says 22-year-old Gaurav with a hint of pride in his voice. Gaurav is casually perched on a ladder leading to a mobile tower that’s planted on the terrace of their practice pad. For Gaurav and his friends, Hip hop is as good as “azaadi”, he says.

“When people study, all of them have to follow the same path. For us, it’s a new adventure every single day. Had we gone for a run-of-the-mill job, we wouldn’t have been able to do what we love the most. We have all studied in colleges but that’s not the path I wanted to follow. I wanted to be free,” says 22-year-old Kamal aka KEM. Renting the studio with his own hard-earned income marked an important milestone in his life both personally and professionally. “Others need degrees to prove that they are qualified to do a job, but for us artistes, we are living proof of our talents and skills. We don’t need someone else to give us a certificate for us to prove what we are capable of,” Sandeep says.

As Deepak leaves in a hurry to conduct his gymnastics class, one of the boys follows him to the exit. He soon comes back with packets full of samosas and fizzy, sweet drinks and serves them to us on paper plates and plastic cups. “Please have them, we can continue with our work after that,” Kamal says as 50 Cent blasts off behind us. The feet-tapping can’t be stopped, it’s a reflex and perhaps criminal to not give in to it while in this haven of Hip hop.

The walls are covered with black chart paper and occasionally interrupted by posters and graffiti-like artwork. From Bob Marley to a seven-feet tall photograph of Michael Jackson embracing the walls, the stories of these other gully boys of Burari are embossed on every inch and corner of their studio that seems to have a life of its own. “We are going to improve the lighting too. A lot of work still has to be done for the studio,” KEM tells us about his establishment, that is often sublet for birthday parties in order to meet financial needs. 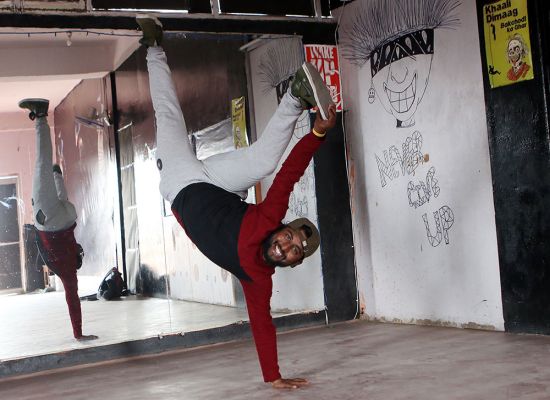 We slowly leave behind the congested bustle of the main road of Burari and take a sharp turn in to a parallel world that barely resembles the rest of the capital. From lavish fields of yellow and green to cattle outnumbering cars, Burari‘s in-roads reek of a different definition of civilisation, one that’s easy for privileged main town dwellers to discount and forget. As we make our way into the narrow, grey lanes of Sandeep’s neighbourhood, voices of hawkers selling everything, from safety-pins to quilts, mix with the excited chatter of kids dancing to a Bollywood number and blanket the air. An old lady wrapped in a maroon shawl sits on the steps leading into the living room where children, less than ten years of age, practise their steps.

“Come in. The kids are just starting their practice,” says the lady who happens to be Sandeep’s aunt, Premvati.

“The parents of these kids have been sending their children to learn dance from our son for a few years now,” she says as we take our shoes off and step inside their two-storey home. A couple of parents wait in the room behind the living room. One of them smiles at us and asks if we are a TV crew and if she can watch her daughter on television soon. “One should only do what one likes. Parents should encourage their children to pursue their dreams, even if that’s dance or sports,” she says while keeping an eye on her daughter in the adjacent room. 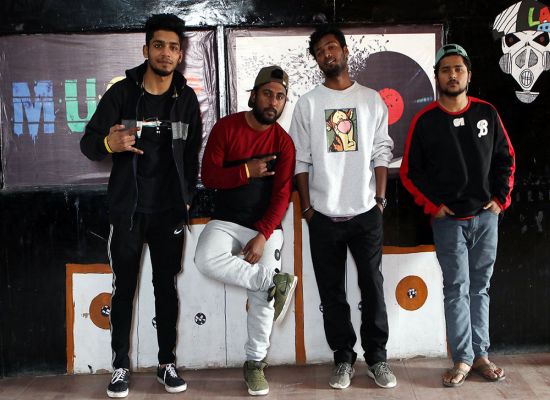 The walls of Sandeep’s home are struggling for breathing space as certificates and a few newspaper cut-outs elbow each other out to retain their place. “We’ve already travelled half the country. Nobody in our families has travelled so much in their lives, at least they hadn’t at our age,” Sandeep says as he goes on to teach his students a new step.

We begin to pack up just before sunset, and on our way out, we happen to ask the children as to who wants to become a dancer when they grow up. The resounding “me”s from all eleven present echoes through the lanes and triggers the flight of a flock of pigeons into the horizon that seeps in through a mesh of crisscrossing wires and Hip hop music.