Deportation Of Rohingyas A Policy Decision, Court Must Not Interfere: Centre 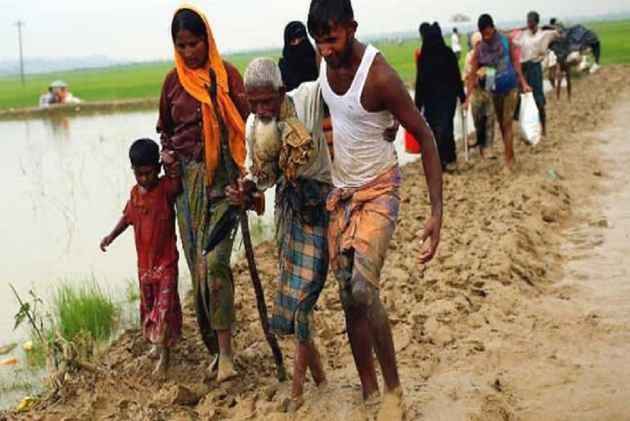 The Centre today filed an affidavit in the Supreme Court over the matter of Rohingya Muslims and their deportation.

The Centre has sought to deport the Rohingya Muslims who have immigrated from Myanmar following large scale violence, which the United Nations categorically called 'ethnic cleansing'.

The Centre has also termed them as illegal refugees, claiming that some Rohingyas are partaking in illegal/anti-national activities such as mobilisation of funds through hundi/hawala channels, adding that procuring fake identities for Rohingyas is tantamount to  indulging in human trafficking.

The Centre has asked the court to not interfere in the matter and leave the decision to the Centre to exercise essential executive function by way of policy decision.

Presence of Rohingya Muslims is not only a drain on India's resources but also a serious security threat, the Centre said, adding that there is an organised network of touts operating in Myanmar, West Bengal and Tripura to facilitate the influx of Rohingya Muslims and that some of these immigrants have links to Pakistan's ISI and also the Islamic State, reported the Times Of India.

Filing its response to the plea challenging their deportation, the Centre said the total number of such illegal immigrants into our country would be more than 40,000 approximately as on date, reported ANI.

The court will now hear the matter on October 3.

The plea, filed by two Rohingya immigrants, Mohammad Salimullah and Mohammad Shaqir, who are registered refugees under the United Nations High Commission of Refugees (UNHCR), claimed they had taken refuge in India after escaping from Myanmar due to widespread discrimination, violence and bloodshed against the community there.

The Rohingyas, in their plea filed through Prashant Bhushan, said their proposed deportation was against the fundamental rights and the international human rights conventions.

"Proposed deportation is contrary to the constitutional protections of Article 14 (Right to Equality), Article 21 (Right to Life and Personal Liberty) and Article 51(c) of the Constitution, which provides equal rights and liberty to every person.

"This act would also be in contradiction with the principle of 'Non-Refoulement', which has been widely recognised as a principle of Customary International Law," the plea said, while seeking a direction to the government not to deport them and other members of Rohingya community.

It has also sought a direction that Rohingyas be provided "basic amenities to ensure that they can live in human conditions as required by international law".

The Supreme Court had fixed September 18 for hearing a plea challenging the government's decision to deport illegal Rohingya Muslim immigrants back to Myanmar.

The apex court had earlier asked the ASG to take instruction from the Centre about its response to the petition challenging the decision on various grounds, including that it violated international human right conventions.

The violent attacks allegedly by Myanmarese armymen have led to an exodus of Rohingya tribals from the western Rakhine state in that country to India and Bangladesh. Many of those who had fled to India after the earlier spate of violence, have settled in Jammu, Hyderabad, Haryana, Uttar Pradesh, Delhi-NCR and Rajasthan.