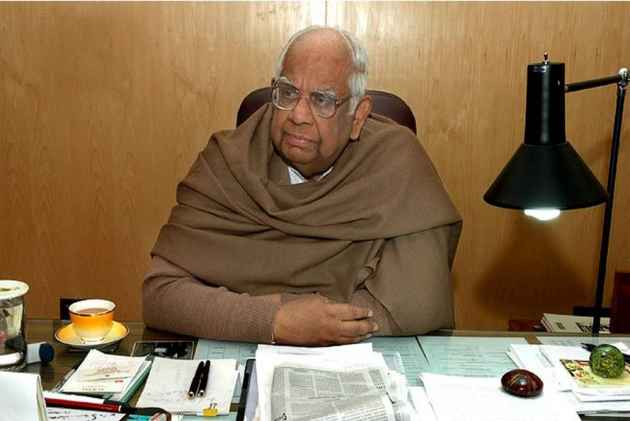 Former Lok Sabha speaker Somnath Chatterjee died on Monday morning in a Kolkata hospital. He was 89.

Chatterjee, who was admitted in a private hospital on August 10, breathed his last at 8.15 am on Monday at the Kolkata's Belle Vue Clinic. He had a cardiac arrest.

The Communist Party of India (Marxist) veteran was suffering from kidney ailment and was put on ventilator support on Saturday.

Describing him as a stalwart of Indian politics, the prime minister said, Chatterjee made Parliamentary democracy richer and was a strong voice for the well-being of the poor and vulnerable.

"Anguished by his demise. My thoughts are with his family and supporters," Modi tweeted.

Born in Assam's Tezpur in 1929, Somnath Chatterjee had joined politics in 1968 and became a member of the Lok Sabha in 1971. In his life, he only lost one election -- to Mamata Banerjee in 1984, which made her the youngest parliamentarian at the age of 29 years.

"Saddened to learn about the demise of Somnath Chatterjee, former Speaker of Lok Sabha," Shah tweeted.

"He (Chatterjee) was an excellent Parliamentarian, whose long years as a member of the House, enriched our Parliamentary traditions. My condolences to his family and supporters in this hour of grief," Shah said.

President Kovind also took to his official Twitter handle to describe Chatterjee's demise as "a loss for public life in Bengal and India."

"Sorry to hear of the passing of Shri Somnath Chatterjee, former Speaker of the Lok Sabha and a veteran parliamentarian who had a forceful presence in the House. A loss for public life in Bengal and India. My condolences to his family and innumerable well-wishers," he wrote.

"I mourn the passing away of Shri Somnath Chatterjee, 10 term MP and former Speaker of the Lok Sabha. He was an institution. Greatly respected and admired by all parliamentarians, across party lines. My condolences to his family at this time of grief," Gandhi tweeted.

Lamenting the death of the former Lok Sabha Speaker, the Congress Party, via their official Twitter handle, said that Chatterjee was "universally admired for being a tough but fair Lok Sabha speaker."

External Affairs Minister Sushma Swaraj said that despite the "ideological differences" between her and Chatterjee, they "cherished a very cordial relationship."

"Deeply saddened to learn of the demise of former Lok Sabha Speaker and senior leader, Shri Somnath Chatterjee. An erudite & seasoned parliamentarian, Somnathda was known for value based politics. He rose above partisan politics on several occasions. My condolences to his family," Singh tweeted.

West Bengal Chief Minister Mamata Banerjee also condoled Chatterjee's death, saying, "Saddened at the passing away of former Lok Sabha Speaker Somnath (Da) Chatterjee. My condolences to his family and admirers. This is a great loss for us all."

Vice President Venkaiah Naidu said that chatterjee was "n outstanding Parliamentarian," adding that he "firmly stood by the principles he believed in."

"Saddened by the demise of former Lok Sabha Speaker, Shri Somnath Chatterjee. He was an outstanding Parliamentarian, who was elected to Lok Sabha 10 times. He was always affable and highlighted people's problems. He firmly stood by the principles he believed in. #Parliament," Naidu tweeted.

Delhi Chief Minister Arvind Kejriwal said that Chatterjee was "one of the greatest parliamentarians of contemporary times," adding that "he will be remembered among the greatest Lok Sabha Speakers India ever had."

Former Finance Minister P. Chidambaram praised Chatterjee for being a "democrat, a liberal and a champion of enlarging the constituency for social democracy," while also mentioning, "When he came into conflict with his political party, he stood by his convictions and was a glue that held progressive parties together."

Chatterjee, who was admitted in a private hospital in Kolkata had a cardiac arrest on early Monday morning, according to the doctors.

One of the longest-serving parliamentarians in India, Chatterjee was suffering from a kidney ailment and was put on ventilator support on Saturday. He suffered a hemorrhagic stroke in July.