With most leagues worldwide sidelined by the coronavirus pandemic, the K-League is the first competition of any standing to come back to life 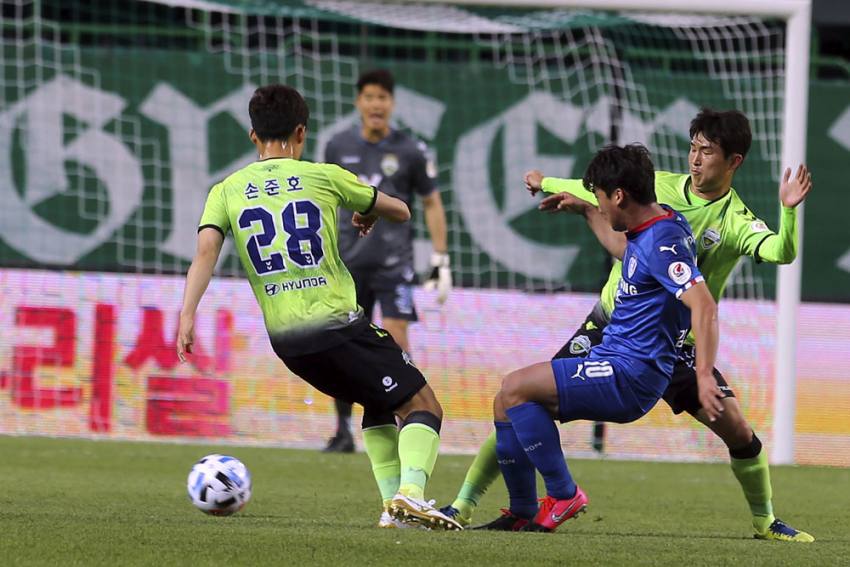 Suwon Samsung Bluewings's Kim Min-woo, second from right, fights for the ball against Jeonbuk Hyundai Motors FC's Son Jun-ho, left, during the opening game of South Korea's K-League football match at the Jeonju World Cup Stadium in Jeonju, South Korea, Friday, May 8, 2020. South Korea's soccer league kicked off the season Friday, three days after the first pitch was thrown in baseball, in yet another sign that life in the country is starting to return to normal after strenuous efforts to contain the coronavirus.
Na Bo-bae/Yonhap via AP
Agencies May 09, 2020 00:00 IST South Korea League Kicks Off Football's Post-coronavirus Era With Unprecedented International Audience 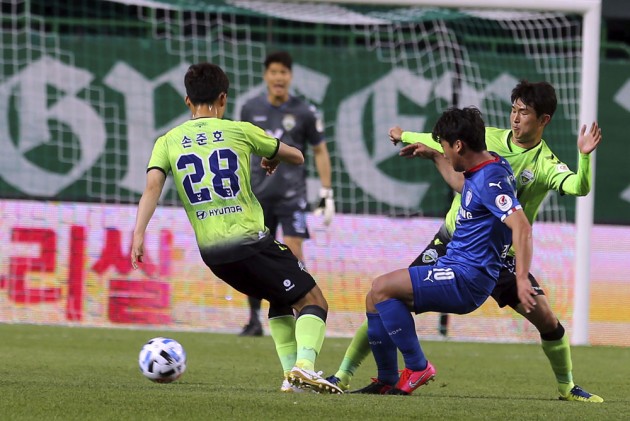 The towering stands of the 42,477-capacity Jeonju World Cup Stadium stood empty on Friday as South Korea opened football''s post-coronavirus era without fans, but with an unprecedented international TV audience.

With most leagues worldwide sidelined by the pandemic, the K-League is the first competition of any standing to come back to life and a host of safety precautions have been imposed, with wild goal celebrations and even talking discouraged.

The long-delayed season-opener between defending champions Jeonbuk Motors and Cup-holders Suwon Bluewings will be watched by sport-starved fans in a swathe of foreign countries, even though spectators are not yet allowed at K-League games.

Ahead of the match only the media section of the stadium, which hosted three matches of the 2002 World Cup, was occupied, and rather than cheers of anticipation, the only sound was chatter among journalists and staff.

Paper sheets taped to stadium seats spelled out "#C_U_SOON" and "STAY STRONG", while one end was draped in a giant green banner for the Mad Green Boys, the Jeonbuk fan club.

The match, played under stringent safety guidelines, is the first glimpse of post-virus football and similar scenes are likely elsewhere as other leagues get underway.

All personnel entering the stadium had their temperatures checked and were required to wear facemasks, and hand sanitisers were located throughout the venue. Players have been told to avoid excessive goal celebrations, handshakes, close talking and blowing their noses.

With fans around the world long deprived of live sport, the K-League has signed season-long rights deals with broadcasters who will show games live in 36 countries and territories including Britain, Germany, and Australia.

The K-League, whose start was delayed two months by the pandemic, will also be livestreamed on YouTube and Twitter with English graphics and commentary.

And the BBC secured a one-off deal for the opening match, which will be livestreamed on its website.

"Football is back!" the British broadcaster proclaimed, noting it had been 59 days since the last Premier League match.

Last year the K-League sold rights to only six countries, all of them in Asia.

"Because we had limited exposure to international fans, it is true that the K-League was largely unknown globally despite its competitiveness," said league spokesman Lee Jong-kwoun.

"2020 will be the first year the league will be recognised and assessed on a global level."

The K-League''s progress will be watched closely by other leagues including the giants of Europe, where Germany''s Bundesliga is the only competition so far to set a date to return, on May 16.

Players and coaching staff will have their temperatures checked before each game and anyone at 37.5 C (99.5 F) or more will be isolated and tested.

If anyone gets infected during the season, their team and those who played against them will have to take a two-week break.

And instead of the traditional pre-game handshakes, players have been asked to bow their heads from a distance.

South Korea endured one of the worst early outbreaks of COVID-19 outside China, prompting professional sports to suspend or delay their seasons, a pattern that was repeated worldwide.

But the country appears to have flattened the curve thanks to an extensive "trace, test and treat" programme, and football''s return comes after baseball started this week, also without fans.

Life in South Korea has returned largely to normal, with workers going back to offices this week under eased social distancing rules, while a stay-on-base order on its 600,000 strong military was lifted, allowing conscripts to go on leave.

Schools will start re-opening next week.

The K-League said spectators will be allowed back into stadiums progressively as the government eases its distancing measures.

The new football season comes just three days after the return of professional baseball in South Korea, which has struck a television deal with ESPN for US fans.

Can't Believe I Have A Hat-trick: Rohit Sharma