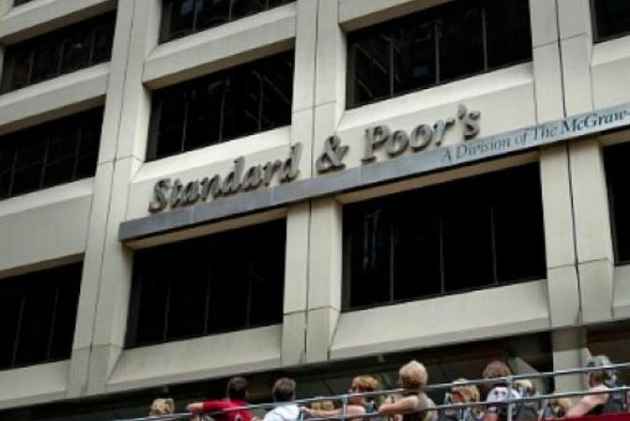 The rating action was quickly termed by the government as "unfair".

These, it said, are "balanced against vulnerabilities stemming from the country's low per capita income and relatively high general government debt stock."

Sanjeev Sanyal, Principal Economic Adviser, termed the rating unchange as "a bid unfair" saying the low per capita income is "neither a reflection on our ability or our willingness of pay debt."

Economic Affairs Secretary Subhash Chandra Garg said S&P choose to pay cautious and hoped that the reforms will reflect in a ratings upgrade next year.

"We are not disappointed but our expectation would be that S&P also takes into account what the government has done," he said adding S&P has said everything that Moody's also stated in its rating upgrade.

S&P has reaffirmed India story, he said. He went on to add that the government will stick to the fiscal consolidation path.

In January 2007, S&P had raised sovereign credit ratings on India to 'BBB-' with a stable outlook, from 'BB+'.

'BBB' rating is a notch above junk status.

On the other side, a disappointing GDP growth, rise in government deficit or political will to maintain reform agenda losing momentum will create downward pressure on the ratings.

It said one-off factors like demonetisation and the imposition of a goods and services tax (GST) had led to some quarterly cooling in India's high growth figures but the medium-term outlook for growth remains favourable.

The growth outlook is supported by rising private consumption, an ambitious public infrastructure investment programme and a bank restructuring plan that should help revive investment.

When Moody's on November 17 upgraded India's sovereign rating to Baa2 -- the highest since 1988, the government was quick to seize the moment to state that the move was "belated recognition" of reforms undertaken.

That rating upgrade was the first since January 2004, putting India in the league of the Philippines and Italy.

In August 2006 Fitch Ratings upgraded India to investment grade at 'BBB-', with a stable outlook, from BB+. Moody's had in 2015 changed rating outlook to 'positive' from 'stable'.

The November 17 rating upgrade comes within weeks of the World Bank handing a 30-place jump to India on its ease of doing business ranking to place it at 100th rank.

S&P said the Narendra Modi government has managed to pass a number of reforms to address long-standing impediments to the country's growth.

It went on to list the reforms as introduction of GST on July 1, a Bankruptcy Code and nonperforming loan resolution framework; a plan to recapitalise state-owned banks; a plan to strengthen the business climate by simplifying regulations and improving contract enforcement and trade; and reforms to the energy sector.

"However, confidence and GDP growth in 2017 appear to have been hit by the sudden demonetisation exercise in late 2016. The July 1, 2017 introduction of the GST, which combines the central, state, and local-level indirect taxes into one, has also led to some one-off teething problems that have dampened growth," it said.

But in the medium term, it anticipated that growth will be supported by the planned recapitalisation of state-owned banks, which is likely to spur on new lending within the economy.

Public-sector-led infrastructure investment, notably in the road sector, will also stimulate economic activity, while private consumption will remain robust. The removal of barriers to domestic trade tied to the imposition of GST should also support GDP growth.

India's growth, it said, is among the fastest of all investment-grade sovereigns, and projected real GDP to average 7.6 per cent over 2017-2020.