The controversy over Mayawati's garland of currency notes refuses to die. Question the source of the money by all means, but isn't much of the outrage and brouhaha over the gesture disingenuous? 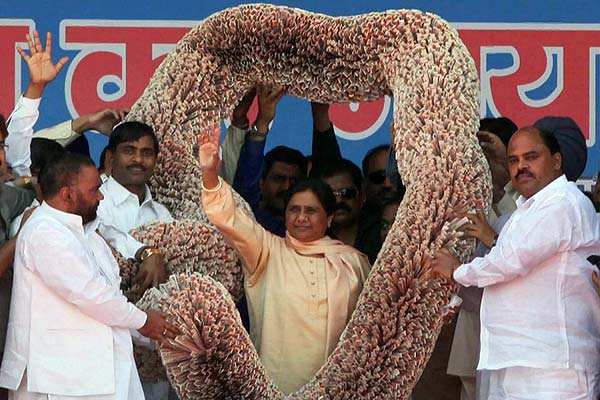 On March 15, in a public rally celebrating the twenty fifth anniversary of the Bahujan Samaj Party (BSP), Mayawati, the Chief Minister of Uttar Pradesh was presented with garland of cash by her party. It is alleged that the garland was woven with millions of rupees. Since then the spectacle of currency garlands has been a cause of much controversy - the latest round being played out today.

While some have viewed the incident as a new low for morality in public life, others have found such a practice antithetical to Indian culture. While the detractors are justified in questioning the source of the money and the means through which it was collected, the outrage over the gesture of presenting cash garlands to Mayawati is disingenuous. Because in India we have a habit of venerating the powerful through wealth offerings, indeed through the very same method, albeit perhasp less ostentatiously.

Let us first remind ourselves of Mayawati’s standing with respect to her supporters and party workers. She is the chief minister of the most populous Indian state. Unlike previous occasions, her party today has a majority in the state assembly. She is the uncontested supreme leader of the BSP. She is also the most famous Dalit celebrity in India today. In other words, she embodies a serious concentration of personal and institutional power.

We in India seem to have a well-established tradition of acknowledging and worshiping power in our public and personal lives; we do it by presenting it with money and gifts. From our Gods to our politicians, to our cricketers and film stars, power is shown respect through financial offerings. More powerful the deity, larger is the gift. Sometimes the offering can take the form of cash. On other occasions it can be made in gold and silver. Politicians are weighed in money, cricketers are presented with gold bats and balls, and religious shrines like Tirupati and Vaishno Devi often receive fabulous offerings of cash and gold. Our personal lives are immersed in similar practices. For example, in Punjabi weddings the bride’s family gifts money to the groom‘s family (perceived as more powerful in a patriarchal tradition) during different ceremonies. Similarly, around festivals companies and businesses gift silver and gold coins to their most powerful clients- with the importance of the client determining the size and numbers of coins.

In public life, the political and economic changes over the past couple decades has further amplified such practices. While the democratic upsurge of the lower castes has widened the cohort of the politically powerful, the economic expansion and the resultant increase in wealth has made the offerings even more spectacular.

Today most Dalits in Uttar Pradesh remain poor and largely unrepresented outside the electoral arena -- other than political leaders there are hardly any prominent Dalit public figures in the state. As the premier representation of Dalit assertion in the state, the BSP must therefore indulge in the politics of public spectacle to emphasize empowerment of Dalits. This is because when political power is without the social and economic component, it must feel a greater burden of demonstration in order to register its presence. That this demonstration takes the form of public offerings of wealth to the most powerful Dalit only points to the adoption of popular social norms and practices related to venerating power.

Seen in this light, Mayawati's garlanding with millions of rupees is not an aberration, rather it is a routine gesture for the acknowledgement of power. That such power is invested in a Dalit woman, and it can be recognized publicly, speaks not only to the project of political empowerment in India, but also to the endurance of our behaviour towards power.