Speaking Of The Battle Of Bamiyan

It's time to assert our humanity, articulate our pluralistic values, and isolate the forces of exclusivist bigotry. Admitting that we are all fallible would be a good first step in that direction. The leaders of the Jehad being waged by military Pakistan stood fast in the face of world opinion, and murdered a grand relic of human faith and aspiration.

Or so it seems.

Oh, I don't mean that there has been no crime, and the real Buddhas are hidden somewhere and will pop up in their magnificent glory in the climax scene.

I mean that, if we are going to pin this crime on somebody, there is plenty of blame to go around. Though of course it is the hand of Mullah Omar and his fellow disciples of Pakistan's military that pulled the trigger, so to speak. Things would be simpler if these criminals were individuals under the jurisdiction of a state; assuming that the legal machinery worked properly, they would then be apprehended and punished, regardless of the attendant broader social dysfunction that led up to the crime.

But we live under a world order in which Pol Pot's people end up with a share of the government, China's mass crimes against its own people are rewarded with more and better trade, and the Pakistani military is rewarded with greater power and prosperity, for, it seems, the perpetration of genocide and rape in Bangladesh.

This latest crime by Mullah Omar is obviously small potatoes compared to some of these atrocities that have gone unpunished. That perspective may make it easier for us to swallow the reality that Mullah Omar's Taliban, and most assuredly their sponsor Pakistan, will not be paying a price for robbing humanity of a vital link with its ancestors.

Having accepted this reality, we, as ordinary mortals, can perhaps extract what enlightenment we can from this tragic crime by a modest inquest of sorts.

Truth, it is said, is one, but lies have an infinite variety. So it has been with the many self-serving reactions of all manner of interested parties to this crime. I am not suggesting that the reaction of many people, especially those of the Buddhist countries and Nepalese, was all hypocritical; clearly much genuine distress has been occasioned by the Taliban's action.

However, many high-profile utterances are more notable for what they omitted to say, than for their actual, generally platitudinous assertions. Take, for instance, the angry chorus of denunciation by Western powers, reported in the media. Virtually all reports in mainstream media have reported the crime as though it was an event entirely unconnected with the West, conveniently omitting the fact that the Taliban, are in fact, the offspring of an unholy union between the West's own jehad against the Soviets and the ambition of Pakistan's military to expand its own domain of institutionalized bigotry. CIA money was the meat Omar has fed on that has made him so great today.

Many spokesmen from the Islamic world have decried the destruction of the statues as un-Islamic. On the other hand, Vishnu Hari Dalmiya of the Vishwa Hindu Parishad has claimed that the Taliban vandalism proves that Muslims are inherently prone to destroy sacred objects of other religions; other Hindu Right organizations have hinted that the Taliban's action somehow justifies assaults against places and things Muslims hold sacred.

Both the Taliban as well as some "leading" Muslims of India such as Imam Bukhari have sought to equate the Taliban actions with the destruction of the Babri Masjid in 1992. Murli Manohar Joshi, an Indian cabinet minister associated with the Hindu Right, has rejoined that it was acceptable to destroy the Babri Masjid because it was erected by Babar, a foreign invader.

While the blandness or irrationality (as the case may be) of some of these statements may be obvious, they could all use a closer examination. While Muslim leaders of the day have, for the most part, spoken in tune with the acceptable norms of tolerance, Muslim rulers such as Mahmud of Gazni (among many others) have destroyed Hindu and Buddhist places of worship and learning, and continue to be venerated as holy warriors to this day in Muslim countries like Pakistan. 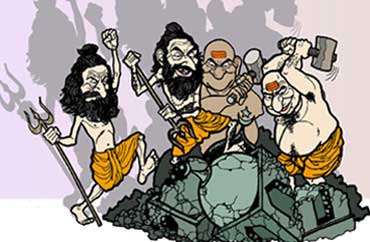 In Afghanistan itself, the record of systematic destruction, by Muslim invaders, of Buddhist monasteries and universities is well-known. So much so, that Mullah Omar's justification of the destruction of the Buddhas to prevent a resurgence of idolatry in his country rings truer than the pieties of Islam's leaders of the day. After all, who is to say, that groaning under the Taliban's harsh Wahabi Muslim regime, some of Afghanistan's youths would not be inspired to the Middle Way by the sheer grandeur and spirituality of their ancestors, as evidenced by the Buddhas?

But, if Muslim hypocrisy is all too evident, there is scant comfort to be had by partisans of other religions. Christians' destructive bigotry has had a long, and continuing history from the days of Constantine and Justinian to the Methodists of today's Fiji (to name only one modern instance). Nor do the Buddhists of Sri Lanka have a shining record when it comes to respecting the language, religion and culture of their Tamil Hindu compatriots.

The Hindu credo explicitly embraces pluralism, but Hindus too, have had a history of systematic persecution of Jains and Buddhists and the destruction of their places of worship -- pertinent facts when self-styled Hindu leaders like Dalmiya make universal assertions about Muslim propensities. And Joshi's justification of the destruction of the Babri Masjid quickly leads us to interesting conclusions, when we note that his party also wants to destroy the Gyanavapi mosque in Varanasi, built by Babar's descendant Aurangazeb; presumably this is justified because Aurangazeb was also a "foreigner" like Babar; thus the Taj Mahal, built by Aurangazeb's father would also be a legitimate candidate for destruction.

With such a backdrop, I for one find it hard to be too upset with Imam Bukhari for his proposal to trade the resurrection of the Babri Masjid for the Bamiyan Buddhas, silly and impolitic though it may have been. It is not my intent here to minimize the Taliban atrocity by belaboring the obvious, namely, "everyone has done it one time or another." Quite the contrary.

I believe that this latest outrage is further proof that the Pakistani military, in both its conventional and Taliban versions, is a profound and aggressive threat to the core values of freedom and pluralism that India stands for. It is a threat that must be subdued and contained if not eliminated. This is a war between inclusivist pluralism and exclusivist bigotry. The power structure in the world have tended to favor the latter a good deal. To redress the balance, we need to assert our humanity, articulate our pluralistic values, and isolate the forces of exclusivist`bigotry.

Admitting that we are all fallible would be a good first step in that direction.