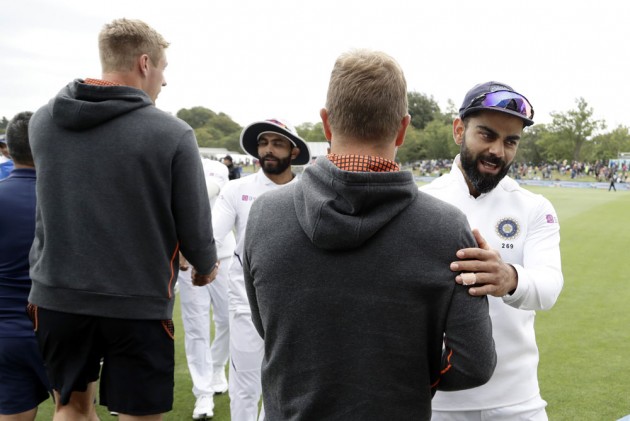 New Zealand wrapped up a 2-0 series victory over India with a seven-wicket win in the second Test in Christchurch on Monday.

India set the Black Caps just 132 to win on day three and the hosts had no troubles reaching their target at Hagley Oval.

After 16 wickets incredibly fell on Sunday, India needed a response to begin day three, but they added just 34 runs after resuming at 90-6.

Tom Latham (52) and Tom Blundell (55) ensured New Zealand cruised through their chase to win the series 2-0.

50! Tom Blundell cuts one away to bring up the milestone. Takes the total to 116/2 now with the target 132 at Hagley Oval. Ross Taylor with him yet to face a ball. LIVE scoring | https://t.co/z3Er2dXVK3 #NZvIND pic.twitter.com/9k0aNZrjZ5

Hanuma Vihari (9) was the first to go on Monday, caught down the leg side by BJ Watling off Tim Southee (3-36).

India were unable to get anything going, although Ravindra Jadeja did manage an unbeaten 16 off just 22 balls.

Trent Boult (4-28) added the wicket of Rishabh Pant (4) and Southee also removed Mohammed Shami (5) before Jasprit Bumrah (4) was run out.

While India's bowlers caused some initial problems to Latham and Blundell, the openers set up what proved a comfortable chase for the Black Caps.

Latham fell to Umesh Yadav (1-45) and Kane Williamson (5) went off Bumrah, who bowled Blundell to finish with 2-39 before Ross Taylor and Henry Nicholls helped New Zealand see out their victory.