Stating that the third wave of COVID-19 has set in, Sudhakar predicted that the state capital will be an epicentre of the latest outbreak. 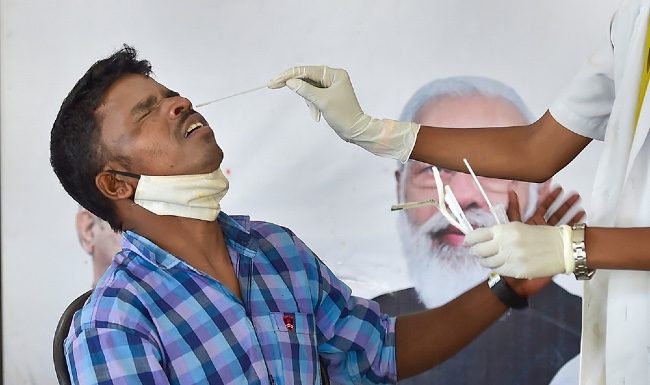 Karnataka Health Minister Dr K Sudhakar on Tuesday insisted upon special measures for Bengaluru amid an alarming rise in COVID-19 cases in the city.

"Taking special steps in Bengaluru has become very necessary. Bengaluru is an epicentre. It was an epicentre in the first wave and second wave. It will be the epicentre during the third wave as well," Sudhakar told reporters here.

Explaining the reasons behind taking special steps for Bengaluru, he said the city has an international airport where many people arrive from abroad. Hence, we need to take special measures, the minister added. Sudhakar said the infections went up to 1.6 per cent from a mere 0.4 per cent in the state, of which 90 per cent were reported in Bengaluru.

"If you look at the national figure, maximum cases are coming in the metropolitan cities. Almost 90 per cent are in those cities. Hence, we are concentrating on Bengaluru with focus on formation of micro-containment zones and screening at the airport," the minister said.

To a query, the minister said the third wave of COVID-19 has begun. "What's the present scenario? Isn't it the third wave? For six months, Karnataka did not have 0.1 per cent cases. If it has gone up to 1.6 per cent on a single day, this is the beginning of the third wave," Sudhakar said. According to him, it has already started in a few states such as Telangana and Maharashtra.

Vaccinating children between the age group of 15 and 18 is one of the measures taken by the government. "Yesterday, we (the government) vaccinated 4,22,252 children, though our target was 6.38 lakh. We could achieve 66 per cent on the first day. We were in the fourth place in the country in vaccinating teenagers. We want to increase more vaccinations," he said.

According to him, there are 43 lakh children in the state within the age group of 15 to 18 and the state government wants to vaccinate them all in 10 to 15 days. I am confident that we will achieve it, he said. When asked about the second dose to the children, the minister said he is waiting for the Centre's guidelines.

To a query on the possibility of lockdowns, Sudhakar asked reporters not to use "strong words". "Don't use strong words like lockdown. Recently, the public life is returning to normality. If we start talking of it, then it will disrupt lives," he added.

Regarding the Congress' Karnataka unit's march from Mekedatu in Ramanagara district to Bengaluru on January 9 demanding the construction of a contentious balancing reservoir across Cauvery river to fulfill the drinking water needs of Bengaluru and neighbouring districts, he appealed to them to refrain from going ahead with it because the huge congregation will only lead to more infections.

The state saw 1,290 cases and five deaths on Monday of which 1,041 infections and three fatalities were in Bengaluru itself.