A Splash Of Happiness 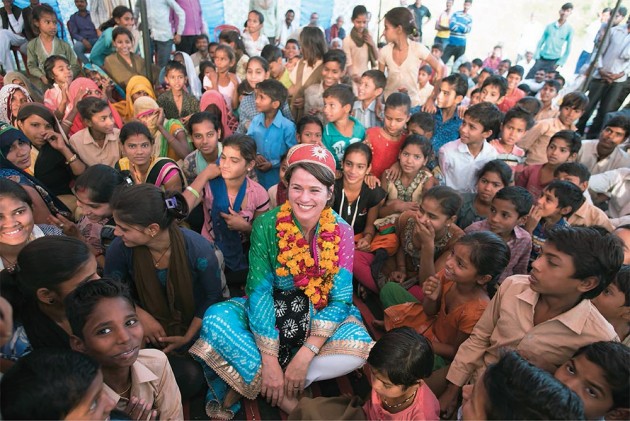 Anandana, the Coca-Cola India Foundation, is committed to serving the environment and the communities. It focuses on issues related to water sustainability, waste management, environment and climate change, and inclusive social development. It recognizes that water sustainability is a key issue affecting development goals and that proper water resources management is necessary to mitigate water stress. The organization believes in active involvement and direct partnership with the beneficiary communities.

In the Balyawas village in Sikar district, Rajasthan, one is surprised by a large reservoir populated with trees, a wet-land contrasting the dry terrain. This enormous structure was funded by the foundation in partnership with the implementer, Social Action for Rural Advancement (SARA). Dwindling ground water resources is a universal problem, and especially so in drought-prone areas. Prior to the construction of the structure, the farmers depended on rainwater and tube wells for irrigation. Naturally, the ponds and canals dried up within a few months after the rainy season; Moreover, the ground water levels were on the decline. The 6 metre high reservoir arrested huge quantity of flowing water. When it overflows, the excess water flows on its natural path through the canals, into the river. The reservoir has enough water until the next rainy season, and enables a continuous feed to the ground water resources. 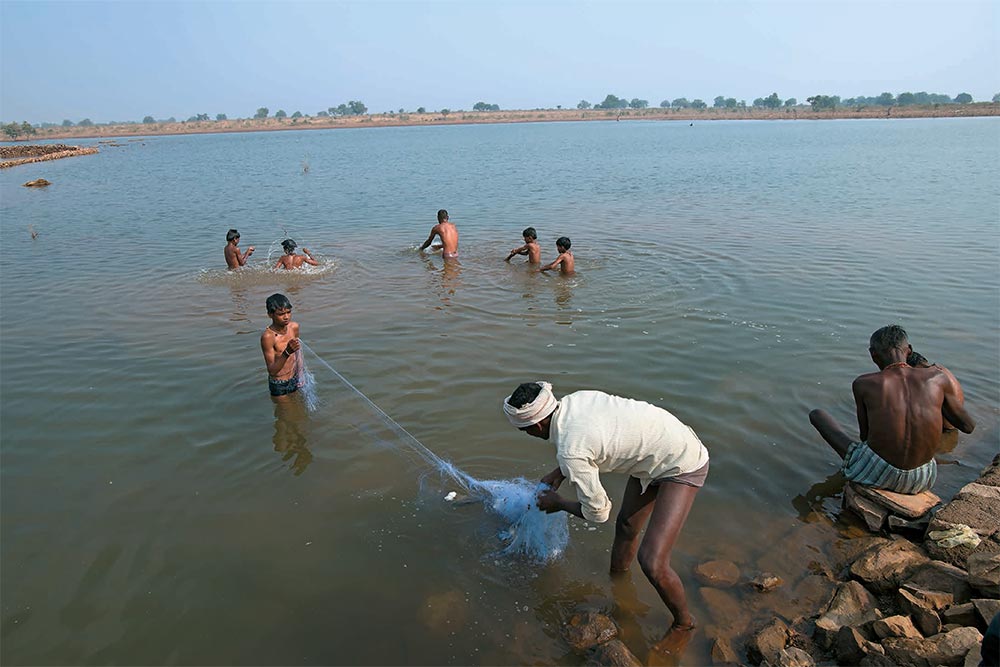 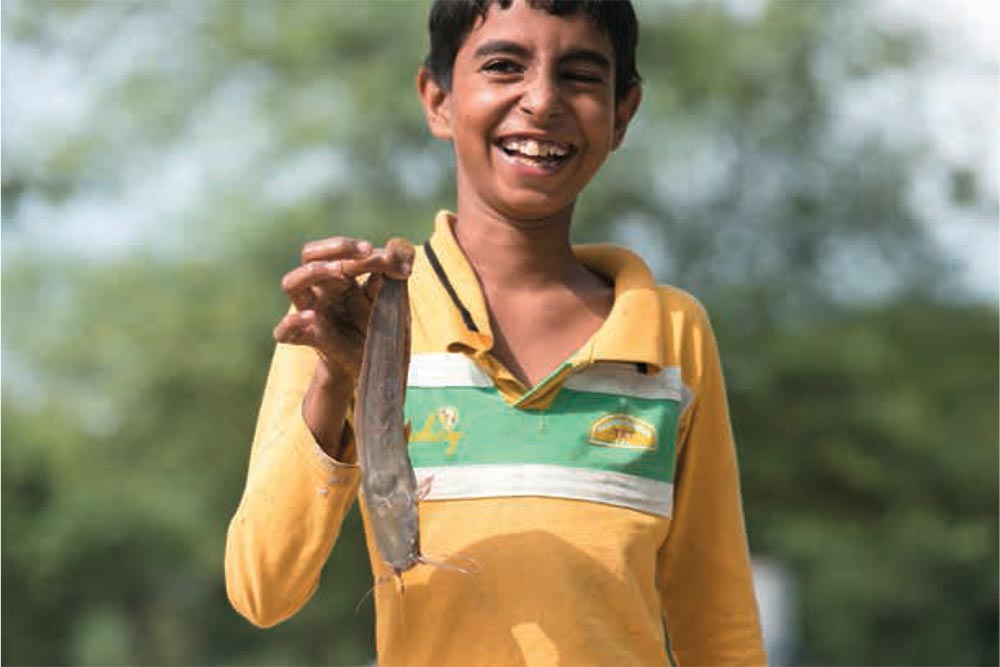 The watershed projects in Balyawas and Jharkua have turned into shing hubs, providing alternative income for the villagers.

Earlier in Sikar district, the locals bought expensive water from the tanker-lorries. They had to spend additional money to buy water for their cattle. “The reservoir has reduced our expenses. Now, our cattle can drink water freely and we too can use it. There has been an impact on the ground water levels, and we see more water in more wells due to percolation from the reservoir,” explains Sujaram Poonya, a villager in Karad Panchayat. “The water in the reservoir holds for 11 months; earlier 50 per cent of it ran off. It has had a direct effect on 1000 wells,” explains Molchand Pooniya, Sarpanch, Karad Panchayat.

Community ownership is a critical part of developmental activities. Past experiences show that when infrastructures are handed over to the communities, the latter do not usually feel responsible, and damage them. Thus, there is a need to make the community feel responsible. The principle was applied by SARA. 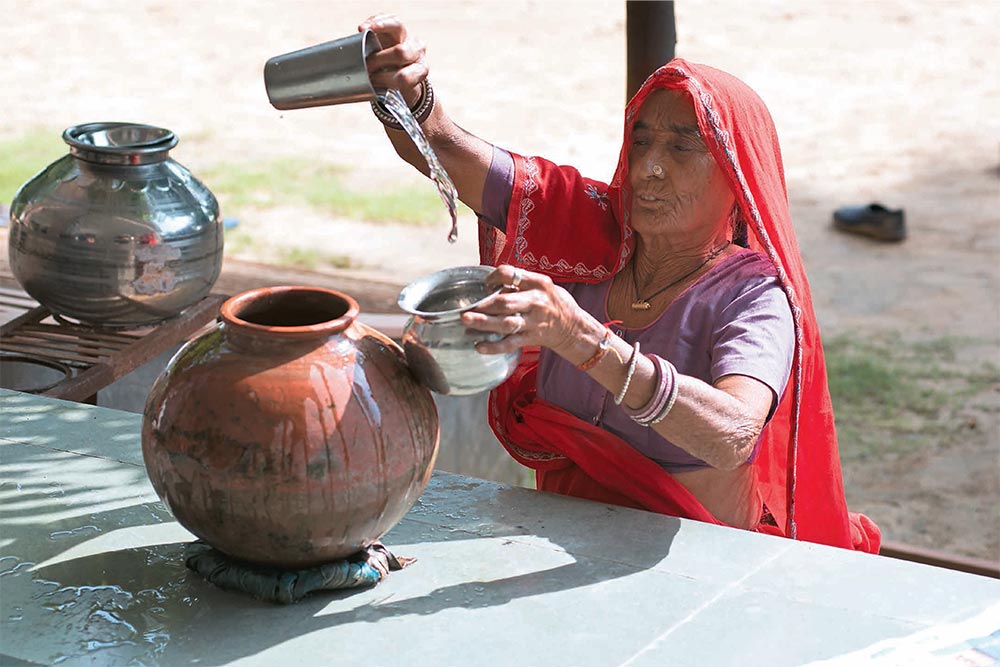 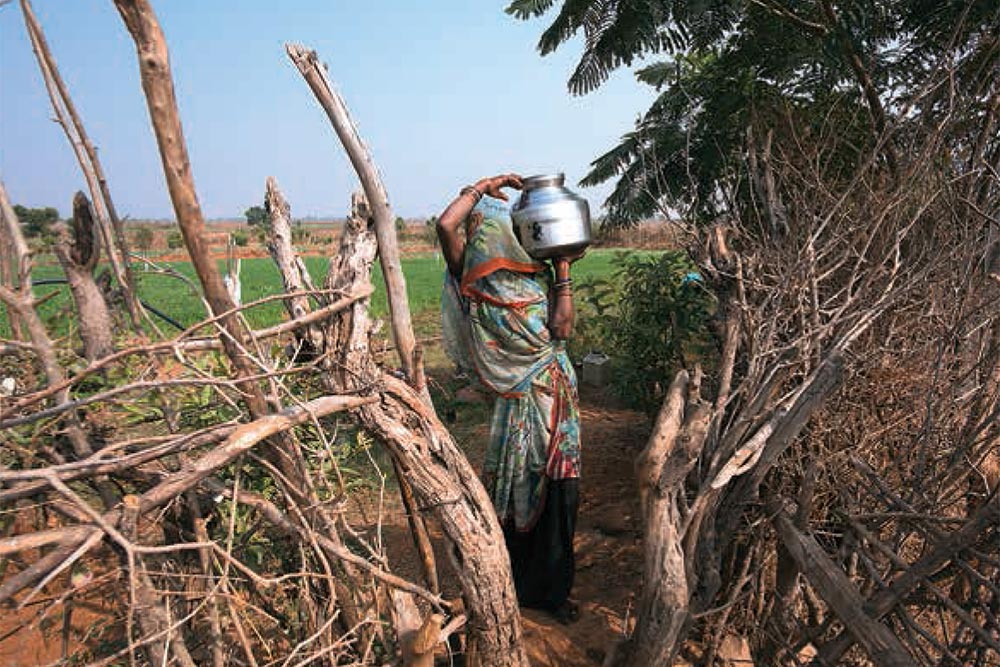 The Watershed project in Balyawas has filled up over a thousand wells by recharging the ground water resource.

“The construction was researched by the various experts. Thought went into the building of the reservoir. From the onset we involved the local people through either paid labour or volunteer work. After the completion, it was handed over to the Panchayat, which assured its maintenance,” explains Mota Ram, SARA

Similarly, in Dholpur, Rajasthan, Anandana works with Rajputana Society of Natural History (RSNH) in the protection of rivers and natural geography. RSNH provides support, guidance and consultancy in the fields of conservation, environment protection, and creation of livelihoods. Dholpur is famed for its tomatoes and potatoes. The villagers recall how until 15 years ago, truckloads were transported to the different markets. But things changed after Dholpur was hit by a dry spell for over a decade. The shift in rainfall pattern meant that the farmers could not depend on agriculture. The financial stability of the farmers took a hit, and they migrated to other areas. The ones who remained suffered from lower produce as agriculture became unsustainable after the month of September, and onset of dry seasons. 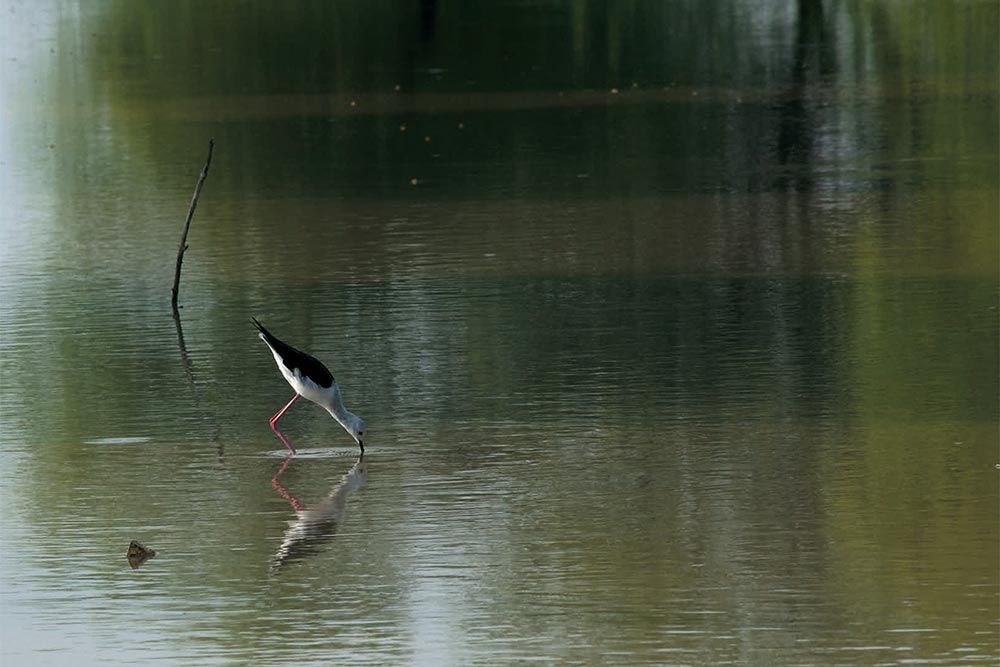 The reservoirs are made for the purpose of recharging water, hence,they are only used by animals and birds. 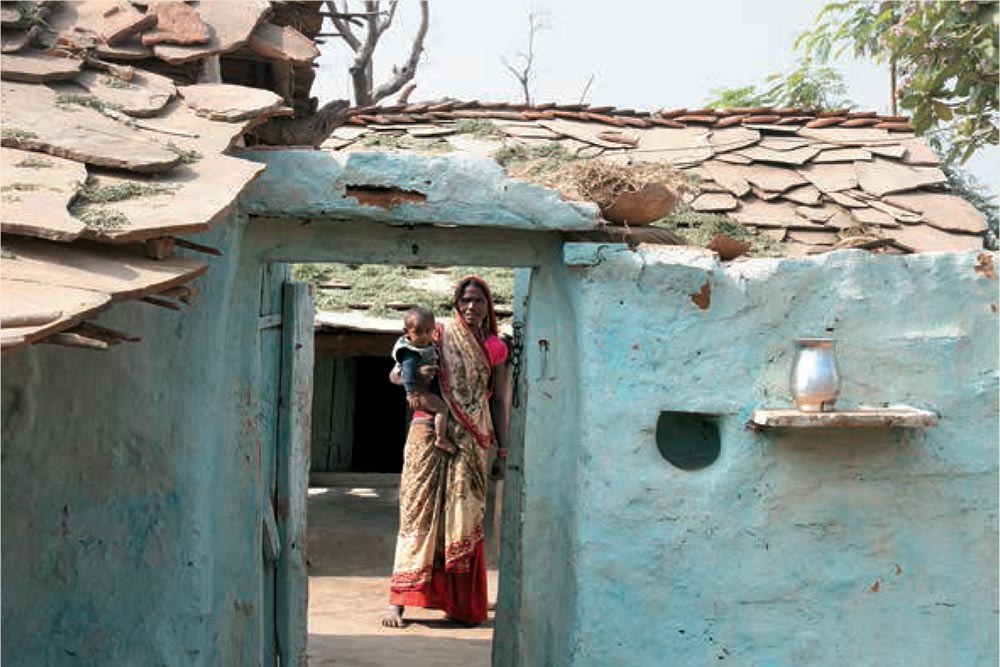 The reservoirs, once constructed, are handed over to the beneficiaries to look after. 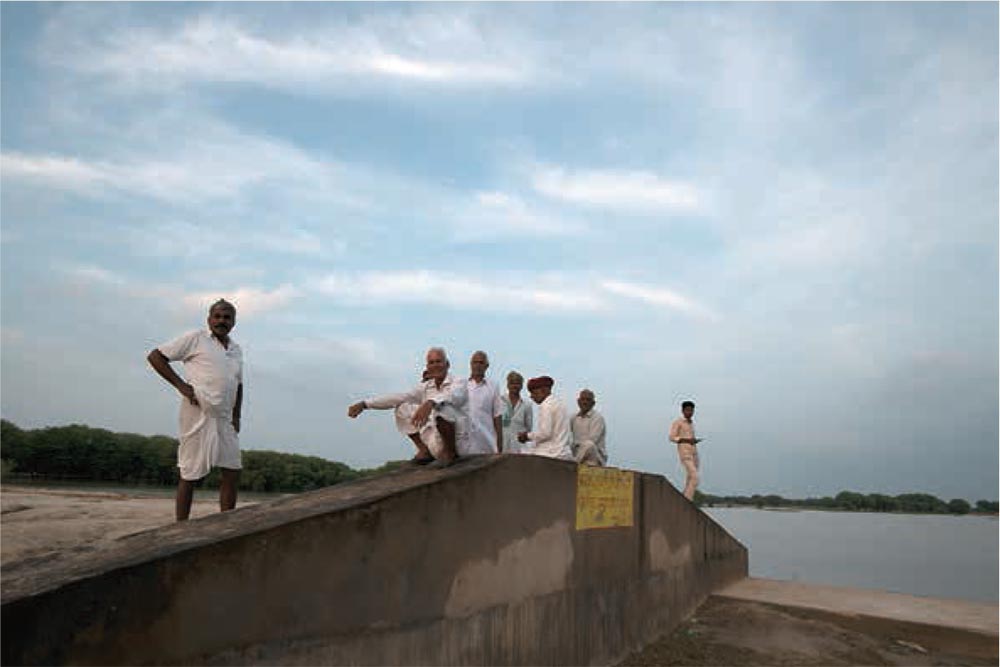 In the arid regions of Bundelkhand, families can depend on the check dams for water even in the hottest sumers..

RSNH decided to initiate a project to protect and restore the river Bamini and mitigate the water crisis. Partnering with Anandana it began the construction of bunds to create a catchment area that now spans 29,000 hectares. The purpose was to ensure year-long water in the river. This contributes to the ground water resources. The bunds are constructed at a height of not more than two meters thus allowing excess water to continue with its natural flow into the river. There are two main structures constructed at different locations to create a mechanism of ‘head to tail’ circulation of water. This ensures that the overflow of the first structure is able to reach the second structure situated some distance away. This increases the catchment area and ensures a large collection of water.

It is expected that in the first few years the stagnated water would percolate rapidly due to the dryness of the terrain. But in a few years it will recede. The river water is expected to be restored to a certain degree due to receding percolation and rainfall in the monsoon season. The reservoir holds 0.65 billion liters of water which, when put to scale, comes to 15% of the water consumption in the country. The reservoir is estimated to have recharged around 400 wells in the area. 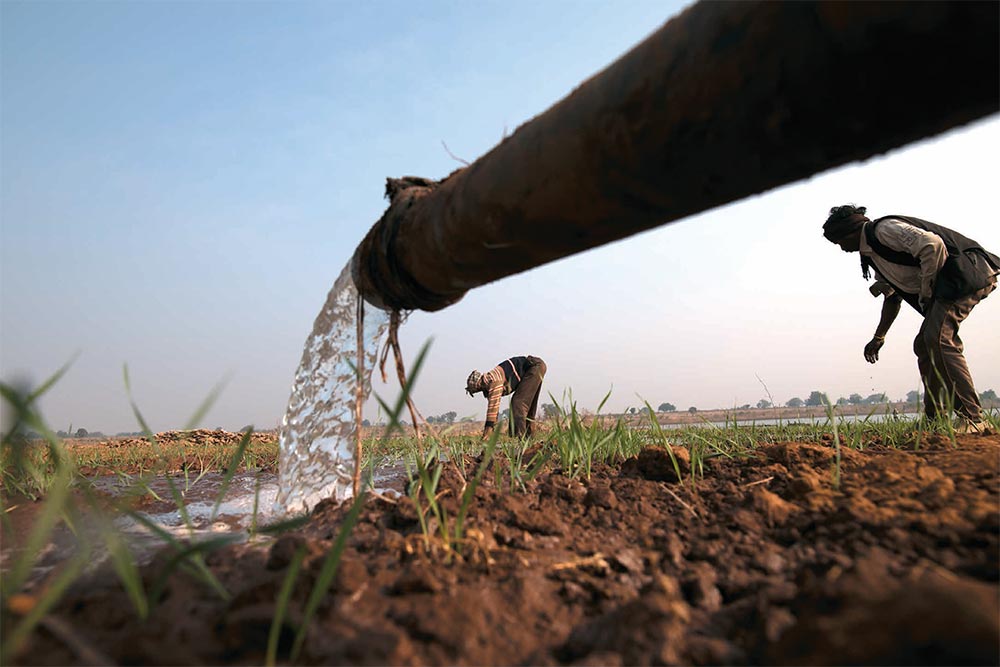 A multitude of farmlands have received year-round irrigation from the reservoirs in Jharkua. 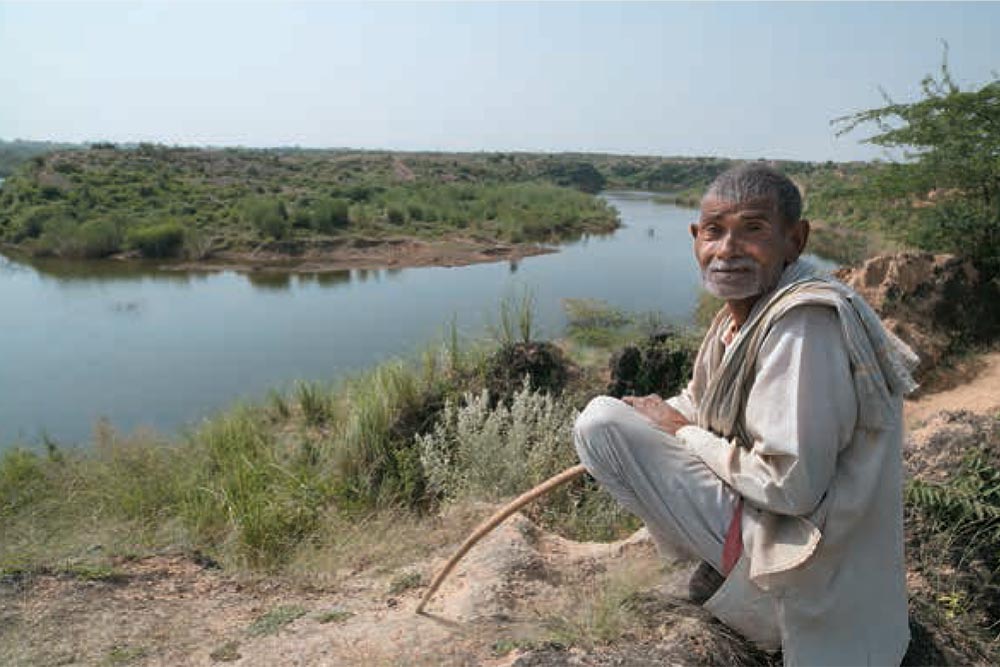 The river did not have this much water in decades according to Siyaram, one of the elders in Dholpur.

In the drought prone region of Bundelkhand, Anandana has worked with Harikritika, an NGO, to come up with solutions. To curb water scarcity, a series of check dams were constructed on the river Bannai. These aim to provide water for eight villages, covering a thousand households. Earlier, the farmers were forced to scale down their farming area to about 20 per cent of the land.

“Forget selling in the open markets, the produce was not enough to sustain my household. But it has become better with the check dams. Now, we can utilize the water using pumps to irrigate the farmland,” says Om Prakash Yadav, a farmer of Rampura village. He currently cultivates wheat and chickpeas. 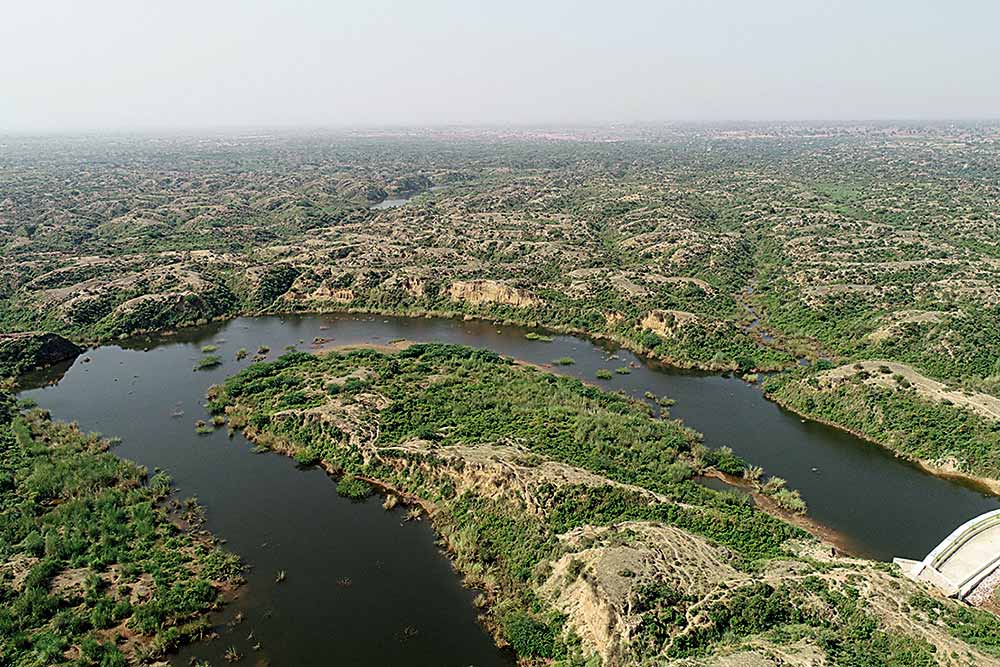 The 'head to tail' system of water management holds 0.65 billion litres of water in the drough prone areas of Dholpur.

The check dams, which were constructed since 2015, helped farmers to pursue commercial cultivation. The construction will impact the economic status of the villagers as lesser numbers will need to seek daily wage labour. “I am a tenant farmer. I hope to get 1-2 quintals of wheat to sustain my family now that the water is expected to stay for at least 10 months, If it doesn’t, I’ll have to look for other ways."

Haritika and Anandana have also partnered in solving water scarcity in other drought prone villages. In the village of Jharkua, multiple water shed areas such as creation of artificial ponds, or maintenance of natural ones, are aimed to ensure the continuous recharge of ground water. A pond was created on a hilly terrain in the village. In Patna village in Chattarpur district, Anandana adopted a model village and was able to create livelihoods by providing borewells and solar pumps. In addition to improved cultivation, the irrigation system saved time for the villagers, especially women who had to walk for kilometers to fetch water. Fishing has increased in the area due to the fishes that now reside in these water structures.

Aatmanirbhar In Defence: An Unconventional Will To Fight

Green Club 5 Hundred: The Last Word In Plywood Is Here

Digital Gold Is In Its Infancy

Either Be Rich Or Be Excited...The Choice Is Yours.

I Grew As A Player In HCL, I Am A Playing Coach In Sify