This was Manchester City's second loss of the ongoing Premier League season, the other being against Tottenham Hotspur in the opening round. 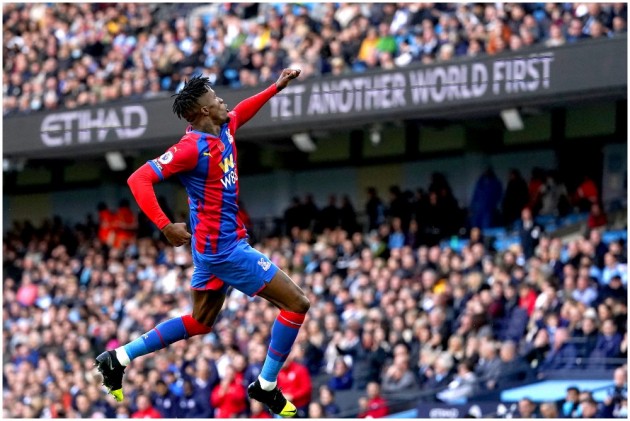 Manchester City slumped to a second loss in its Premier League title defense as goals by Wilfried Zaha and Conor Gallagher earned Crystal Palace a 2-0 win at the Etihad Stadium on Saturday. (More Football News)

City's hopes of recovering from Zaha's sixth-minute goal were hit when Aymeric Laporte was sent off in first-half stoppage time for bringing down Zaha when he was the last man. Gabriel Jesus had a 60th-minute goal disallowed for a narrow offside against Phil Foden in the buildup.

Gallagher then added a second goal on the break in the 88th minute, consigning City to its first loss in the league since the opening round against Tottenham. City dropped five points behind leaders Chelsea.

Burnley got its first win of the Premier League season by beating Brentford 3-1 on the day Sean Dyche reached nine years as Clarets manager.

The hosts scored all of their goals in the first half at Turf Moor on Saturday, with Chris Wood lashing the opener past league debutant Alvaro Fernandez in the fourth minute.

Matt Lowton added a header in the 32nd and new signing Maxwel Cornet then struck to make it 3-0 four minutes later.

Brentford substitute Saman Ghoddos pulled a goal back with 11 minutes of normal time remaining, but the visitors were unable to spoil Dyche’s anniversary as his side took maximum points for the first time in 10 league games this season.

It saw Burnley move out of the relegation zone, temporarily at least, while Thomas Frank’s Bees remained 12th after their third straight league defeat.