Having bowled Bangladesh out for 150 in the first innings, India bundled them out for 213 in the second essay after declaring their first innings on their overnight score of 493 for six. 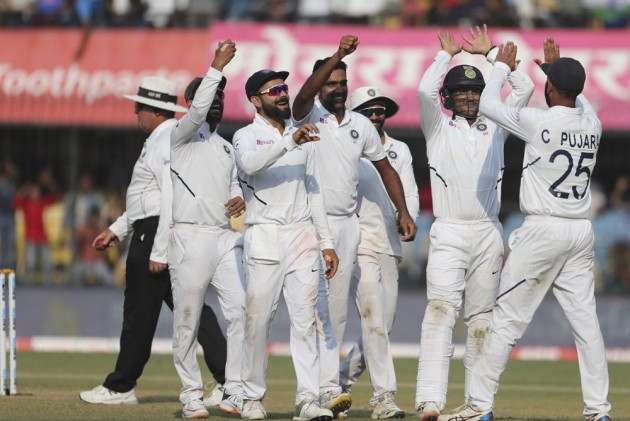 India annihilated Bangladesh inside three days for a resounding innings and 130 run-victory in the first Test, riding on one of the most hostile fast bowling performances in recent times.

The quick victory was on predicted lines. This was also India's sixth straight Test win.

Having bowled Bangladesh out for 150 in the first innings, India bundled them out for 213 in the second essay after declaring their first innings on their overnight score of 493 for six.

The victory also gave India 60 points, and they strengthened their position in the World Test Championship table with 300 points in their kitty.

The thrashing also completed a hat-trick of innings wins for them, having beaten South Africa in the second and third Test in the previous series.

The gulf was huge between the two teams and it could only get worse for Bangladesh from here onwards as the Indian pace attack, in the upcoming Day/Night Test with pink ball, is expected to cause more damage to their batsmen's psyche.

It was a game where Mohammed Shami (match haul of 7 wickets), Umesh Yadav (4 wickets overall) and Ishant Sharma (3 wickets) scared the hell out of an opposition that showed little stomach for a fight, save senior player Mushfiqur Rahim (64, 150 balls, 7x4), who delayed the inevitable.

Ravichandran Ashwin (match haul of 5 wickets) complemented the pacers, chipping in with wickets at regular intervals.

Bangladesh may have lost a lot of Test matches but the one in Indore has left them with scars that will remain for a long time. An international team looked frightened in the face of relentless hostility.

There were no angry gestures or over-the-top celebrations but scorching pace, mesmerising swing and the red cherry rearing at the throat from good length.

It created a spectacle and Bangladesh didn't have the wherewithal to handle it.

The best part about this Indian attack is that its intensity is same even in the third session as it is early in the morning. Mehidy Hasan Miraj (38 off 55 balls), despite sharing a 59-run stand with Rahim, being bounced out by Umesh, was a case in point.

It was a 'heavy ball' in cricketing parlance that grew big on Miraj, hitting him on his chest and then tickling the stumps. It was pure intimidation as the batsman looked in physical pain as he left.

Ditto for Imrul Kayes, who got a perfect outswinger (inswinger for a left hander) from Umesh in the first session. The ball tailed in and uprooted the leg-stump. Kayes had given up on the fight from the start as he looked nervous while facing each and every delivery.

Shadman Islam may have been a heavy scorer in domestic cricket but he has never faced a bowler of Ishant's calibre in his short Test career.

So when young Shadman got one from Ishant to nip back from length, he couldn't react in time to bring his bat down, as the ball clipped the top of middle stump.

Bangladesh's best bet, Mominul Haque (7) was jittery from the start and survived a DRS call while trying to leave a delivery pitched on the off-stump.

However, when Shami angled one into the opposition skipper, he was adjudged plumb in-front even though Virat Kohli had to take a review, which turned out to be successful.

Shami's guile again came to the fore when he hurried Mohammed Mithun with a bouncer and his mistimed pull was easily taken at mid-wicket by Mayank Agarwal.

For the team's oldest player (in terms of age) Mahmudullah Riyad, the issue was technical as well as temperamental.

A fluent player in white ball format, not for once during the two innings did he look comfortable be it against the pacers or spinners.

In the post-lunch session, Shami just bowled one fuller on the off-stump channel. The ball held its line and all the veteran did was to offer a training session slip catch to Rohit Sharma.

Amid the ruins, Rahim, after getting reprieve in the first session, showed his will to fight that was missing in younger colleague Liton Das (35 off 39 balls), who showed T20 skills when something else was required.