Australia will be without Harry Souttar as the giant Stoke City defender picked up a knee injury against Saudi Arabia. Only the top two from each of the six-team groups are guaranteed a place at the 2022 FIFA World Cup in Qatar. 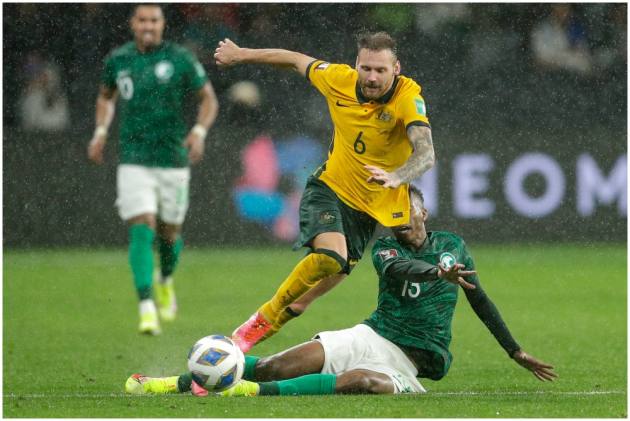 Australia are hoping to get their 2022 FIFA World Cup Qualifiers campaign back on Tuesday in Sharjah with a win that would almost certainly end China’s slim hopes of returning to the Middle East next November. (More Football News)

One point from the last two games has resulted in the Socceroos slipping into second in Group B at the halfway stage, three points behind Saudi Arabia, the two teams drew 0-0 in Sydney on Thursday, and just one above Japan. Only the top two from each of the six-team groups are guaranteed a place at the 2022 FIFA World Cup in Qatar.

Failure to win in Sharjah, the game has been switched from China due to travel restrictions put in place by Beijing to combat the spread of COVID-19, could see Australia slip out of the two places that guarantee a place in the 2022 FIFA World Cup in Qatar in each of the six-team groups.

Coach Graham Arnold is staying positive despite the recent setbacks.

“We’re in a great spot, it’s all in our hands,” Arnold said. “If you’ve got something that’s in your hands, you’re in a great position rather than having to rely on other results.”

Australia will be without Harry Souttar as the giant Stoke City defender picked up a knee injury against Saudi Arabia.

China, with just one FIFA World Cup appearance in their history, have just four points out of the five games so far to increase pressure on coach Li Tie. Defeat would likely spell the end of any ambitions of finishing third and entering the play-off route to the 2022 FIFA World Cup.

Following the 1-1 draw with Oman on Thursday, there have been growing calls for Li to resign though former China coach Zhu Guanghu has defended the current boss.

“Very few of the current crop of Chinese players are hungry for football,” Zhu said.

“Just like what Sir Alex Ferguson said about the Chinese players, they can play the ball well when not being challenged. But when under challenge with limited space, they cannot do it.”

“It’s too late to deal with their deficiencies at the national team stage, this should be done when they are young,” he added.

Saudi Arabia can move a step closer to a sixth FIFA World Cup appearance with a win over Vietnam which have lost all five games so far. Japan travel to Oman currently with seven points from five games,

In Group A, Iran and South Korea are moving clear. Iran scored twice in the closing minutes to defeat Lebanon 2-1 on Thursday to stay first with 13 points. Iran takes on Syria, bottom of the group with just two points while Korea will stay on course for a tenth successive FIFA World Cup appearance with a win over Iraq in Qatar.