Vinicius Junior, who plays for Real Madrid has been drafted into the Brazil squad for the upcoming 2022 FIFA World Cup qualifiers after Roberto Firmino picked up an injury. 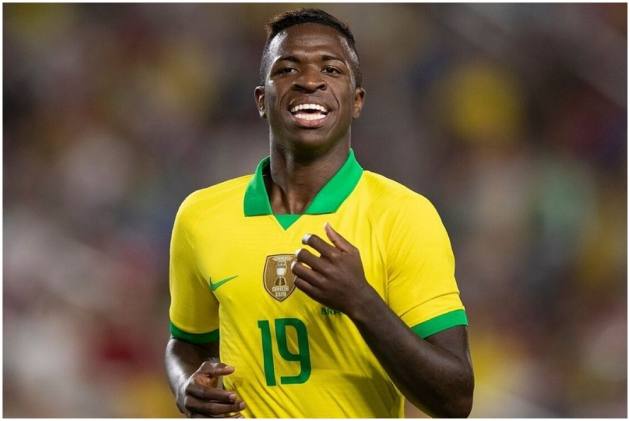 Brazil fans have pleaded with coach Tite to bring striker Vinicius Jr. into the starting lineup since the beginning of the season. But if Wednesday’s practice formations are any indication, that’s unlikely to happen in the Seleçao's World Cup qualifier against Colombia. (More Football News)

The 21-year-old Vinicius, with nine goals in 16 matches for Real Madrid, only traveled to Sao Paulo to join the national squad after Roberto Firmino picked up an injury. Coach Tite appears to believe the young striker is behind Raphinha and Antony, who have already delivered goals for the team.

Brazil lead South American qualifying with 31 points from 11 matches and could secure a spot at next year's World Cup in Qatar with a win Thursday against Colombia. Brazil take on second-place Argentina next Tuesday. Tite has been experimenting with his combinations, including on the wings where Vinicius performs best.

Tite told a news conference Wednesday he has spoken with Real Madrid’s Carlo Ancelotti about tactics to bring out the best in Vinicius, who so far hasn’t produced his best while wearing the famous yellow shirt. He has played only seven matches for Brazil, mostly off the bench.

“We have to be patient and understand the youngster, the time he might need to have his affirmation in the national team,” Tite said. “He had a very long time to adapt at Real Madrid, and that gave him that maturity so he could develop and arrive at the stage he is.

"It is no different in the national team.” Tite also indicated that the afternoon training session would hint at who would start against Colombia. As expected, no Vinicius. Raphinha, who delivered goals and assists in three good performances in the latest international window, appears to have beaten the competition again.

Tite said Real Madrid and Brazil have different systems, and Vinicius has so far thrived only with his club. “Real has a tripod in the midfield, supporting its left wing. That leaves (Vinicius) in a position as the penultimate striker, sometimes he is the last man with Karim Benzema coming from the back,” Tite explained.

“We don’t use that tripod here. So he will only be a forward, aggressive, with freedom. And he will also have to help defensively.” In an interview late last month, Vinicius admitted he was sad at being initially overlooked for Brazil’s squad for the matches against Colombia and Argentina, but insisted his time will come.

“I have to work more, play better matches. And even when I am doing well I have to know that Brazil is hard, there's a lot of players,” the striker told TNT Sports. “I know that the right moment will come. I hope to play well this month because there will be another list in January.”

Days later, Brazilian media reported the striker and his entourage didn’t see Tite having much interest in his performances in Spain. Vinicius was called in to replace Firmino as Brazil’s coach faced criticism and despite the fact the two players operate in different positions.

Cesar Sampaio, Tite’s assistant and former Brazil midfielder, argued Vinicius needs time because he is the youngest member in the squad and is still “under construction.” “One day I had to go through this process, seeking my place in the national team," Sampaio said.

"We can’t change the Seleçao, but we can adapt so everyone can show on the pitch that they deserve their place here. “His numbers and his performance make us put a lot of responsibility on him.”