Meanwhile, a spokesperson has confirmed that the England vs Andorra World Cup qualifying match, will go as per schedule. Nobody was injured. 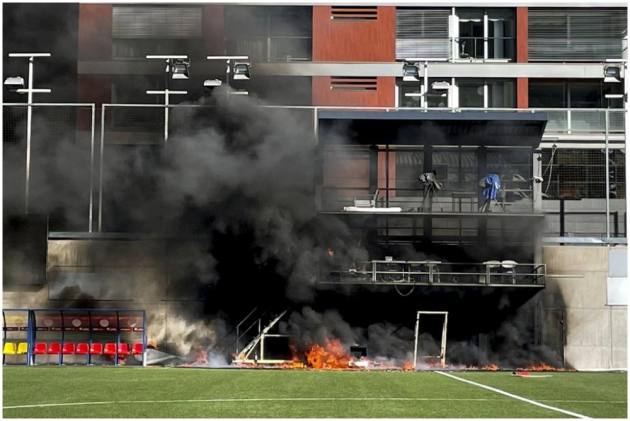 A fire broke out at Andorra’s national stadium on Friday, a day before England is set to visit the tiny nation to play a 2022 FIFA World Cup qualifier. The government of Andorra said the blaze was put out by firefighters not long after it started. (More Football News)

The fire consumed a lower part of the stadium very close to the touchline near midfield of the artificial pitch between the two dugouts. Billowing dark smoke streamed up from red flames that burned under a platform for television cameras.

England is to play at Andorra on Saturday in Group I of Europe’s World Cup qualifying. England lead the group, with Andorra second to last. There was no immediate indication from authorities as to the extent of the damage.

The national stadium for the principality tucked in the Pyrenees Mountains between Spain and France can hold 3,300 spectators. According to Sky Sports, no personal harm has been reported but there have been significant material damages.

The plastic structures where England players would be based melted partially because of the intensity of the flames. It is also learnt that the area which caught fire was the same where the VAR screen was due to be housed and most crucial of all, this is a 3G synthetic pitch.

The pitch has also been damaged a bit. Meanwhile, a spokesperson said: “The schedule will continue as planned and the match will go ahead.” Three hours earlier, England players had trained the same ground putting in the final preparation for Saturday night’s clash.