Group I leader England can already start planning for the 2022 FIFA World Cup after a 5-0 rout of Albania. On the other hand, Italy remain at the top of Group C, but only ahead of Switzerland on goal difference. 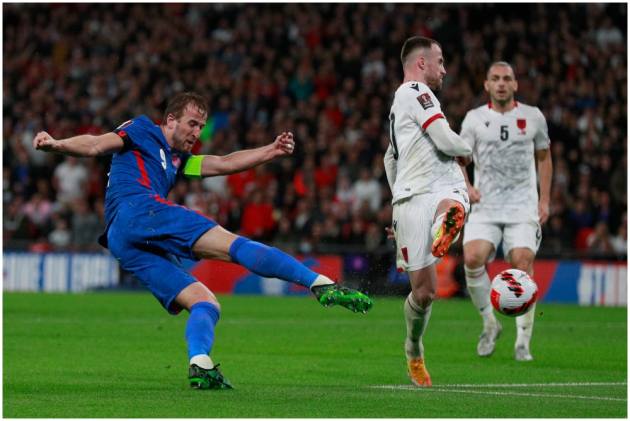 Four months after Italy beat England in the European Championship final, it was a night of contrasting fortunes in the penultimate round of 2022 FIFA World Cup Qualifiers qualifying in Europe for the teams on Friday.

While Italy overcame Jorginho’s miss in the shootout in the July final, his failure to convert a 90th-minute penalty against Switzerland could prove costly for Italy, which failed to qualify for the 2018 World Cup.

It meant Italy drew 1-1 after Giovanni Di Lorenzo’s header canceled out Silvan Widmer’s strike for Switzerland. Italy remains top of Group C, but only ahead of Switzerland on goal difference. The second-placed finisher enters the playoffs.

Group I leader England can already start planning for Qatar after a 5-0 rout of Albania, fueled by Harry Kane’s perfect hat trick — a header, left-footed strike and right-footed scissor kick. There was also a header from Harry Maguire and a first Wembley goal for England for Jordan Henderson.

All that’s required to be sure of going to Qatar next November is a draw in the final qualifier on Monday away against San Marino — the world’s lowest-ranked team — regardless of second-placed Poland’s result against Hungary. Poland is now set for the playoffs after Robert Lewandowski scored twice in a 4-1 victory over Andorra.

Scotland advanced to the European playoffs after Nathan Patterson and Che Adams clinched a 2-0 at Moldova to secure second place in Group F. The Scotsmen are trying to reach a World Cup for the first time since 1998.

Scotland moved seven points clear of third-place Israel, which lost 4-2 at Austria in a later game, with only one round of group games left on Monday.

Denmark has now won all nine of its games after beating the Faeroe Islands 3-1, but an 89th-minute goal for the visitors in Copenhagen spoiled the group winner’s bid for total perfection in qualifying.

Scotland likely needs to finish with at least a draw against Denmark in Glasgow to be sure of getting a home game in the single-leg playoff semifinals in March.

Scotland will be among 10 group runners-up to be joined in the playoffs by two teams which won a Nations League group last year. Austria should be one of those teams.

FIFA will make the playoffs draw on November 26 in Zurich. Runners-up with the six best records will be drawn to play at home first in the semifinals.

The three winners of the playoffs finals on March 29 will complete the lineup of 13 European teams at the 2022 FIFA World Cup in Qatar.