Jordan Veretout has replaced Paul Pogba in the France squad and is likely to start for the national team in Saturday’s home game against Kazakhstan. 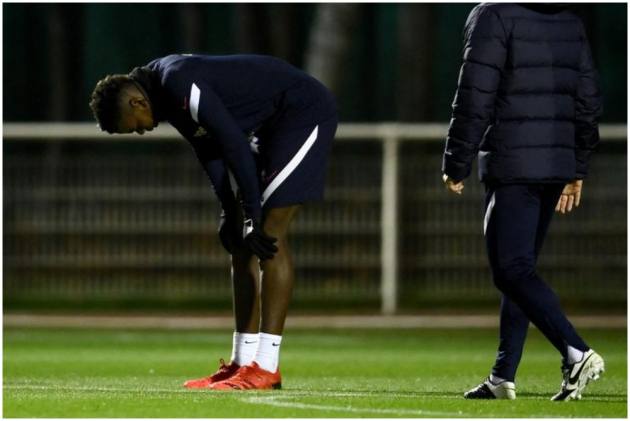 Video footage on French media showed the Manchester United midfielder pull up after taking a shot in training on Monday, before hobbling away.

Jordan Veretout has come into the squad as a replacement for Pogba, who would likely have started for France in Saturday’s home game against Kazakhstan.

The French lead their qualifying group by three points and need one win from their final two games to seal first place and advance automatically to next year's tournament in Qatar. France play Finland, which is four points behind in third place, on Tuesday.

ðÂÂÂÂÂÂ¨ | The moment Paul Pogba suffered an injury in training with France pic.twitter.com/jGHJYQLb6H

Pogba has been serving a domestic suspension for United after getting sent off against Liverpool last month after coming on as a substitute, meaning he has missed the team’s last two Premier League games.

On the other hand,  Italy lost another two midfielders ahead of the key 2022 World Cup qualifier against Switzerland in Rome on Friday. The Swiss are also set to miss Steven Zuber.

Coach Roberto Mancini, already without regular starter Marco Verratti through injury, said on Monday that Nicolò Zaniolo and Lorenzo Pellegrini would return to their club Roma.

Pellegrini has a knee injury while Zaniolo has a left calf issue. Both also missed Italy's victorious European Championship campaign through injury. Mancini has called up Matteo Pessina and Danilo Cataldi to replace Zaniolo and Pellegrini.

Switzerland had already been without captain Granit Xhaka and forward Haris Seferovic to long-term injuries, and lost winger Steven Zuber on Monday as the fourth player to drop out injured from the squad selected last week.

Only the first-place finisher gets a direct spot into next year's finals in Qatar. The second-placed team goes into the playoffs in March, needing to advance past two opponents to reach the World Cup.