After winning the first two T20Is in this three-match series, India will be hoping to notch another win in an already won series against West Indies. Both sides meet in Providence Stadium on August 6. 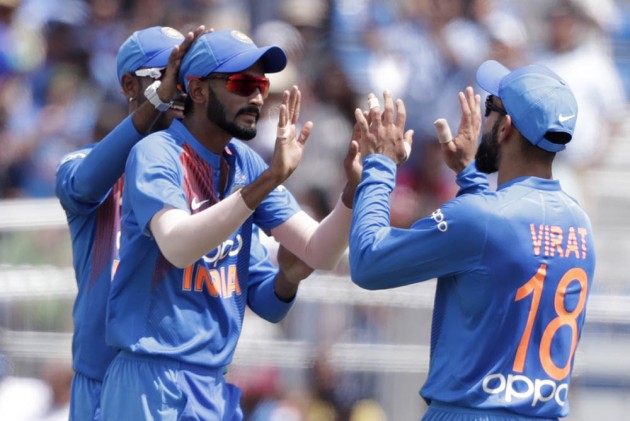 The series pocketed, India are likely to experiment with their line-up in pursuit of a whitewash when they take on an embattled West Indies in the third and final T20 International in Guyana's Providence Stadium on August 6.

India concluded the two-match US leg of the series by taking an unassailable 2-0 lead after notching up a 22-run win in the second game on Sunday.

Their performance wasn't the most fluent in the first match but Virat Kohli and his men were back to being a dominant force in the second match, though, the outcome was decided by the Duckworth-Lewis method after thunderstorm and consequent rain did not allow the game to continue.

While the batting line-up may not change much, India may try a new combination in bowling.

"...sealing the series gives the chance to bring few guys in. Idea is always going to be to win first. But winning the first two games gives the cushion," Kohli said after Sunday's win.

It will not be a surprise if KL Rahul is drafted into the playing XI, replacing the struggling Rishabh Pant. The young Delhi batsman managed scores of 4 and 0 in the first two matches.

Skipper Kohli has backed Pant to the hilt and it will be interesting to see if the 21-year-old rising star gets another chance.

Neither Rohit Sharma nor Shikhar Dhawan are likely to be rested.

For Dhawan, it's his first series after missing the World Cup due to a thumb fracture and since he has not scored many runs in the first two matches, he will be eager to get some before the ODIs and Tests.

There is a strong possibility that leg-break bowler Rahul Chahar may make the cut in place of young paceman Navdeep Saini.

Deepak Chahar, cousin of Rahul, may also find a place in the playing XI and Ravindra Jadeja could be the one who is rested.

For hosts, putting up a coherent performance remains a challenge. Considered a force in the shortest format, they have not lived up to their reputation.

The likes of Kieron Pollard and skipper Carlos Brathwaite are due a big knock.

If they can manage to walk away with a win on Tuesday, it will be a confidence-booster for the side ahead of the ODIs and Tests.

The match starts at 8PM IST.