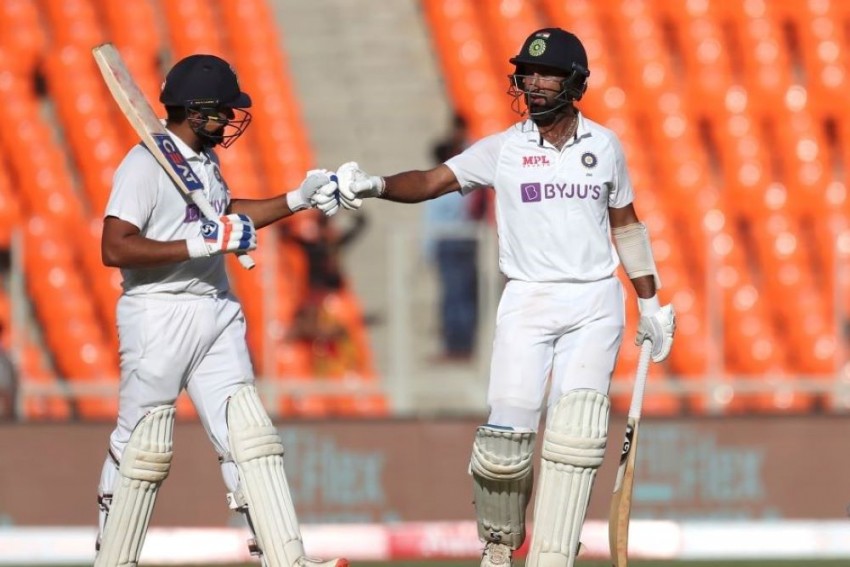 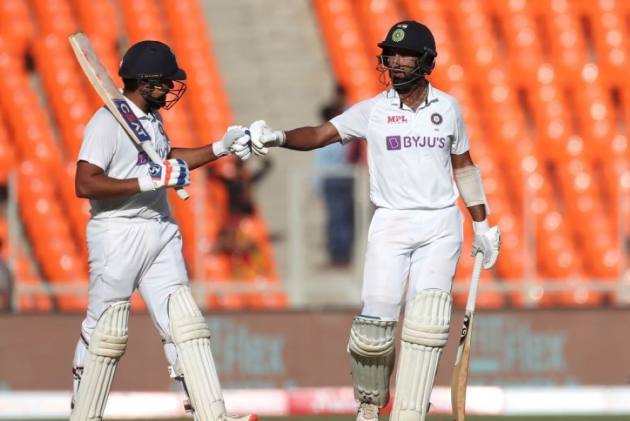 England's batsmen lost the battle of both mind and skills in yet another shoddy performance to surrender the momentum to India with Axar Patel and Ravichandran Ashwin calling the shots on the opening day of the fourth and final Test at Narendra Modi Stadium, Motera in Ahmedabad on Thursday.

After five innings, England crossed the 200-run mark but a total of 205 in 75.5 overs was certainly not what Joe Root had expected when he called it right at the toss on a day which would have ideally been best for batting.

There was turn and bounce but the pitch was far from being a minefield that some of the England batsmen save Ben Stokes (55, 121 balls) made it out to be.

Mohammed Siraj (14-2-45-2) also played his part to perfection with the semi-new and old ball, hurrying the batsmen with sheer pace as he did with Jonny Bairstow.

A cursory look at the England line-up, loaded with an extra batsman, will reveal that four -- Stokes, Bairstow (28, 67 balls), Dan Lawrence (46 off 74 balls) and Ollie Pope (29 off 87 balls) got starts but failed miserably on the conversion part.

The others came in and went without breaking a bead of sweat. It was as if already in their minds, they were playing on a track they thought would turn square.

Stokes was a cut above the rest both in defence and offence before a moment's indecision cost him his wicket.

Washington angled one in and Stokes was on backfoot after initially trying to come forward preempting an off-break. The ball didn't turn and hit the back leg with clear indication of crashing into the leg stump.

Stokes' dismissal, after a good show, upset the team's rhythm just when it was looking to redeem itself after a poor first session.

Similarly for Lawrence, who was ready to play the attacking game, and Pope, intent on using his footwork to defend while negating the turn. There was always going to be a delivery with their name written all over it.

In case of Lawrence, he was beaten by the away turn when he danced down the track only to be stumped.

In case of Pope, the strategy that kept him on course brought about his downfall.

He came out when Ashwin changed the line of his delivery, dropping it a bit short and the attempted flick went between his legs and Gill had a reflex catch at forward short leg.

Patel, whose straight deliveries have scarred the English batsmen, was again menacing in the first session with Siraj giving him good support.

Stokes and Bairstow, during their 48-run stand, showed that if one can trust their defences, batting wasn't impossible.

Both played the spinners close to their body on most occasions and especially on the front-foot.

But on a track like this, no batsman would feel completely set and that's what happened with both Bairstow and Stokes.

The first hour of the match showed that England's younger lot is still feeling the after-effects of the demoralising 'Pink Ball' loss.

Brought into action as early as in the sixth over, Patel bowled an arm ball which had Dom Sibley (2) leaving a huge gap between bat and pad, trying to play for the spin. The result was an inside edge onto the stumps.

Zak Crawley (8) felt that the easiest way to survive was to attack Patel. He got a boundary but then jumped out and lofted the spinner without getting to the pitch of the delivery.

The result was a simple catch to Siraj stationed at mid-off, who didn't even have to move an inch from his position.

Joe Root (5), who went off the boil post his double hundred in the first game, got a peach of an inswinger from Siraj, which had him caught plumb in-front, leaving his team at 30 for 3 inside the first hour.

It was the post tea session where the lower order caved in with Ashwin in his elements. England lost their last five wickets for 39 runs in 14.2 overs.