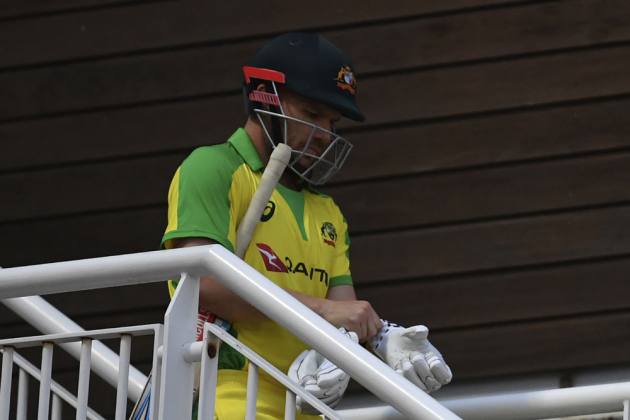 Australia's limited-overs captain Aaron Finch is hopeful that players' families will soon be allowed to accompany them on overseas tours to keep them in good mental space inside bio-secure bubbles in these difficult COVID-19 times. (More Cricket News)

Finch's statement came after Indian players were allowed to take their families along with them for the ongoing tour of England.

Soon to be dad Finch will be outside Australia on national duty for two months and he knows that a hasty return for the birth of his child, if that happens in between, is next to impossible.

"They're the risks you take. She wasn't too keen on me going and if she happens to give birth a bit early, we might be in some trouble...it might be a FaceTime birth, I don't know," Finch was quoted as saying by Australian Associated Press.

Finch-led 20-member Australia squad will leave for the Caribbean on Monday, without the likes of David Warner and Pat Cummins, who have opted out of the tour to be with their families.

Australia will play five Twenty20s and three ODIs against the West Indies, and then travel to Bangladesh for a five-match T20 series.

Upon returning, the Australian players will have to spend a fortnight in hotel quarantine.

Finch is set to return on August 25, while the due date for the birth of his first child is September 8.

Asked if the cricketers' families will soon travel with them on tours, Finch said: "I don't have the answer for you but it's something that needs to be looked at.

"I remember speaking to Davey Warner about it during his IPL stint.

"His kids are at an age where they understand how long time is ... when you have kids crying on FaceTime, it doesn't make it easy," he added.

Cummins, Warner, Glenn Maxwell, Jhye Richardson, Kane Richardson, Daniel Sams and Marcus Stoinis are a host of cricketers who decided to sit out of the tour to be with their families.

Finch, meanwhile, said that the visitors will soon decide whether to take a knee in the West Indies in support of the Black Lives Matter movement.

"Over the last 12 months, we've educated ourselves quite a bit on Black Lives Matter," he said.

"We'll speak to (West Indies veteran) Jason Holder and be really respectful and supportive of anything they wish to do."