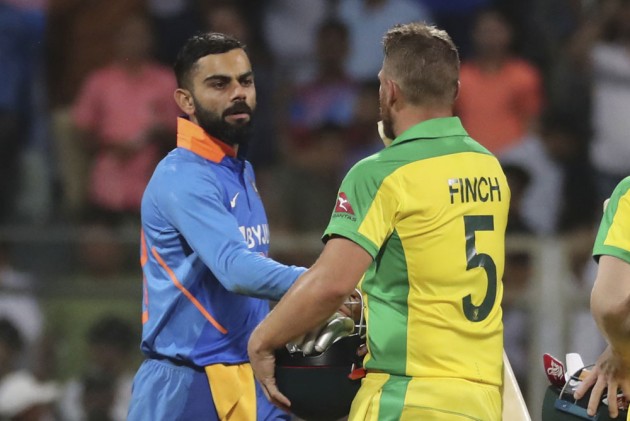 Australia's limited-overs skipper Aaron Finch revealed his greatest combined India-Australia ODI team, with names of some of the greatest cricketers featuring in the XI. But a confused Finch left a big hole. (More Cricket News)

Finch, 33, shockingly left one spot vacant in his team as he found it too hard to pick a spinner. Well, a case of spoilt for choice for him.

"Brad Hogg has such a great record, should I go with Harbhajan Singh or maybe Ravindra Jadeja to bat at eight to get extra batting option?" Finch told Sports Tak.

Well, besides the aforementioned spinners, both the Australian and Indian national cricket teams have been blessed with brilliant tweakers.

Probably, the name Shane Warne didn't ring a bell to him.

But he sure managed to name two legendary wicketkeepers in Adam Gilchrist and Mahendra Singh Dhoni.

"Sehwag is my number one pick. He was so dominant. As soon he was on, the game was over. I want to go with Rohit Sharma, his record is amazing, but I want to watch Adam Gilchrist open with Virender Sehwag, hence I would pick Gilchrist," Finch said.

Moving into the middle-order, he said: "I will go with Ricky Ponting at no. 3 and then Virat Kohli at 4. It's such a tough position to bat at no. five. I would probably pick Hardik Pandya at no. 5 and Andrew Symonds at no. 6 position."

He picked Dhoni for the all-important number 7 spot and spoke about the cool and calculative nature of the former India skipper. "Dhoni is a cool head under pressure, he takes the team over the line, be it in IPL or international cricket. If the team is 3 for 10, he comes out and get the runs. If the team is chasing, he finds a way the team to get there," he said.

Picking the bowlers, Finch said: "I would pick Glenn Mcgrath, Brett Lee, and Jasprit Bumrah as my pace trio."