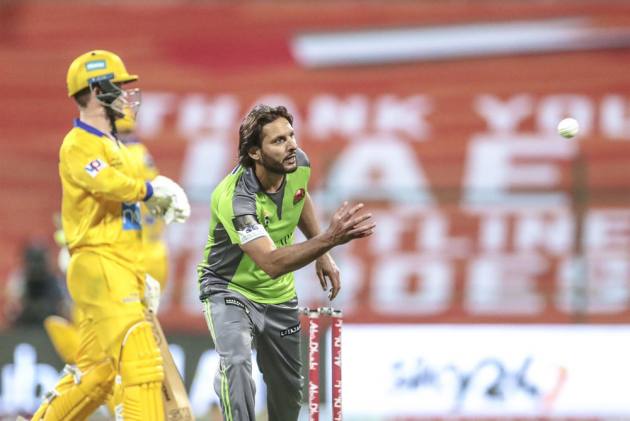 On the third day of the tournament, the ever-green Afridi led Qalandars' bowling attack by taking two wickets for just 16 runs to walk away with the Man-of-the-Match award.

It was Qalandars' tight bowling that restricted Team Abu Dhabi to 100 runs.

Chasing the target, Qalandars, through a quick 30 from Tom Banton, an unbeaten 40 from Sharjeel Khan, and an unconquered 27 from skipper Sohail Akhtar, won the match with 10 balls to spare.

Earlier, Qalandars won the toss and elected to field.

Afridi, who was introduced in the fourth over, gave away nine runs. At the halfway mark, Team Abu Dhabi were 41 for one.

Afridi had Ben Duckett caught by Tanvir at deep third man for 15 and also had Stirling caught by Asif Ali at deep mid-wicket for 29.

Daniyal, who was re-introduced in the seventh over, bowled brilliantly to give away just four runs.

Chris Jordan bowled the eighth over and was hit by Joe Clark for a six over square leg and two exquisite drives through covers.

Clark did not spare Sohail Tanvir too, who bowled the next over, hitting him for a six over deep mid-wicket and also picked a boundary behind square leg.

Jordan ended Clarke's innings with the second ball of the last over by trapping him leg before for 34.

Najibullah Zadran then smashed Jordan over long-on for a six to help Team Abu Dhabi reach the 100-run mark before he was run out off the last ball.

Chasing the target, Tom Banton gave Qalandars a breezy start by hitting Usman Sanwari for three consecutive boundaries to take 18 runs off the first over.

Banton also picked a boundary off Rohan Mustafa's second over.

In the third over, Naveen Ul Haq ended Banton's innings by having him caught at point by Mustafa for 30.

Sharjeel too picked the right balls to keep the scoreboard moving at a brisk pace.

He helped Qalandars reach their target by hitting Shinwari for two successive boundaries off the first two balls of the ninth over.