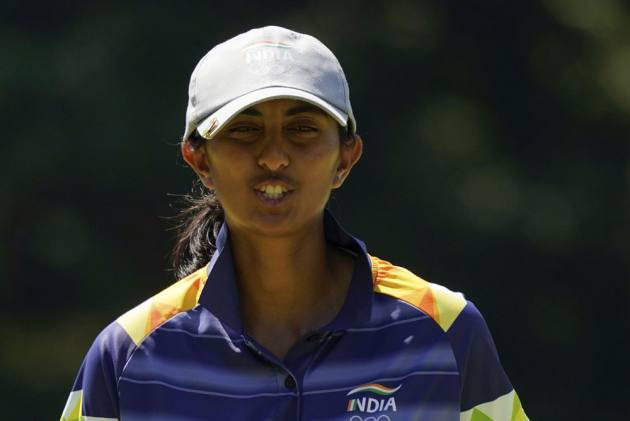 Indian golfer Aditi Ashok crossed the first hurdle as she made the cut to ensure her participation at the weekend rounds of the AIG Women's Open at Carnoustie, Scotland. (More Sports News)

Aditi (71-74) hung in towards the tough closing holes at the challenging Carnoustie Links to finish her 36 holes in one-over, which was also the cut line as 66 players made the cut.

This was the second time Aditi has made the cut at the Women's Open when she achieved her career-best in a Major with T-22 finish in 2018.

Aditi had a birdie on the sixth, but gave back that gain on the next hole. On the tougher back nine, Aditi dropped shots on both the Par-3s. They were the Par-3 13th, which she had birdied on the first day, and the Par-3 16th. She negotiated the last two holes with pars to squeeze into the weekend action.

England's Georgia Hall produced another solid day, shooting a round of 69 to be a co-leader at the halfway stage. The 2018 Women's Open champion backed up her first round of 68 with another round in the 60s to put her on seven-under-par for the tournament.

Alongside Hall is Mina Harigae, who fired a round of 67, and made the most of calmer morning conditions to set the clubhouse lead on seven-under-par.

Hall turned in 33 having rolled in three birdies on the fourth, fifth and seventh holes, an even-par back nine where she made three more birdies and took a share of the clubhouse lead.

Harigae rolled in three birdies and one bogey on the front nine, before making four further birdies and dropping one shot on the back nine.

One stroke behind the leaders and tied for third place are American Lizette Salas and South Korea's Sei Young Kim, who produced rounds of 69 and 71 respectively.

Six players are tied for fifth on five-under-par heading into the weekend, including Ireland's Leona Maguire who fired a bogey-free round of 67 to move herself into contention.