The 0-1 result at Sharjah and that of a 1-1 draw between the hosts the United Arab Emirates and Thailand meant that Stephen Constantine's side finished fourth in Group A. 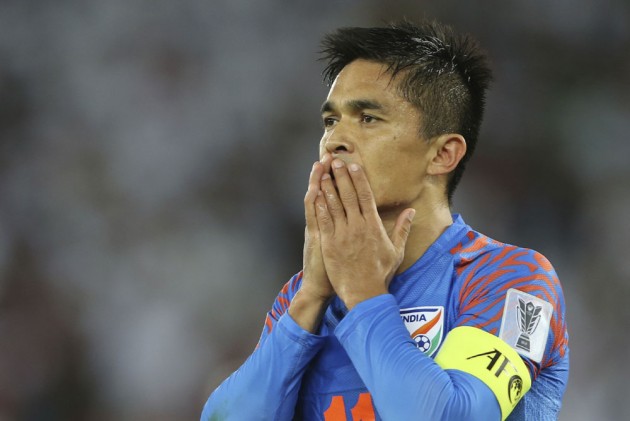 Sharjah used to be Indian cricket's battleground, but on Monday, the true Arab metropolitan city witnessed the rise of another India, through the beautiful game. And there were no pretensions of being gentlemanly or pomposity because the other India played the beautiful game beautifully.

Yes, it will go down as one of the biggest nights of Indian football. For one, they came close to qualifying for the Round of 16 of the continental tournament – the AFC Asian Cup, and second, the Blue Tigers showed the world that India can play the beautiful game the beautiful way. And the thousands who witnessed the historic match will tell the story some other day.

They will talk of a new Wall of India in Gurpreet Singh Sandhu, the defensive brilliance of Sandesh Jhingan and the tireless runs from the 'Flash' Udanta Kumam. It will surely continue how a certain Stephen Constantine almost plotted one of the biggest heists in Asian football with the limited resource at his disposal. And they will also talk about how a diminutive Indian stood between Lionel Messi and Cristiano Ronaldo as one of the most prolific scorers.

Wasteful India Go Down To UAE 0-2

How Can India Qualify For The Knockout Stage?

India needed a draw against the West Asian side to qualify for the round of 16 for the first time in the continent's showpiece event after failed attempts in 1984 and 2011. And it was a draw for 90 minutes.

But an injury-time penalty conceded by skipper Pronay Halder against a relentless Bahrain outfit sealed the fate for India as the Blue Tigers crashed out of the 2019 AFC Asian Cup in heart-breaking fashion.

The 0-1 result at Sharjah and that of a 1-1 draw between the hosts the United Arab Emirates and Thailand meant that Stephen Constantine's side finished fourth in Group A.

Bahrain converted a penalty in the 91st minute through Jamal Rashed, who made no mistake after Halder committed a careless tackle inside the box.

Entering their final group game following a 4-1 win over Thailand and a 0-2 loss to UAE, a determined India held on for 90 minutes before conceding.

This was India's fourth appearance in the continental showpiece, beginning with the 1964 edition, in which only four teams participated. In their next Asian Cup in 1984, India were knocked out in the first round and they suffered a similar fate in 2011, when they lost heavily to Australia, South Korea and Bahrain.

However, the team under coach Stephen Constantine started the tournament with a demolition of Thailand, sounding a warning that it was not here to make up the numbers.

They were a shade unlucky against UAE and went down fighting, but looked determined against Bahrain.

The Blue Tigers started off shakily after losing defender Anas Edathodika to injury as early as the second minute, but Sandesh Jhingan and his colleagues managed to stave off the Bahrain strikers until the blunder inside the box.

India ended at the bottom of four-team Group A on three points from three matches. Hosts UAE, which played out a 1-1 draw against Thailand in the other match played simultaneously in Al Ain, topped the group on five points.

Thailand, whom India had beaten 4-1 in their opening match, and Bahrain got four points each but the South East Asian country ended at second spot as they had beaten the West Asian side in their previous match.

A knock-out round qualification in the Asian Cup would have been ranked as the biggest achievement in Indian football after the Golden Years (1951 to 64).

In 1984 and 2011 also, India had crashed out of the tournament in the group stage. They lost three and drew one in 1984 while losing all their three group matches in 2011.

India had finished runners-up in the 1964 edition in Israel but that tournament was played in a round-robin format comprising four countries with the winners being decided on the basis of points collected in the league. There was not a single knock-out match in that edition.

The first half was more or less an even contest without any clear chance from both the sides though Bahrain had slight better ball possession of 60 per cent as against 40 for India.

Bahrain came out all guns blazing for goals in the second half and had waves of attacks on the Indian citadel and they ultimately succeeded in the injury added time by earning a penalty.

Constantine made one change in the playing eleven that started in the earlier two matches with Rowlin Borges coming in for attacking midfielder Anirudh Thapa, clearly indicating the need to strengthen the defence.

India suffered a jolt just after the start of the match as central defender Anas Edathodika suffered an injury and Salam Ranjan Singh came in his place for his first match of the tournament.

Despite the change at the heart of the Indian defence, the back four played beautifully not giving the opposition any clear chance in the first half.

India had a nervy start as Bahrain, for whom it was a do-or-die match, pressed from the very first minute, but they weathered the initial pressure and held their own and even had some fine moves later on.

Both sides did not have a clear chance in the first 45 minutes though Bahrain had better possession. Unlike the match against the UAE, it was not the overwhelming possession by the opponents as India also strung some nice passes and link-ups.

Central defender Jhingan, the seniormost of them, was brilliant yet again, as he made some crucial interceptions inside the box to deny the Bahrain attackers to connect the crosses from the flanks.

Defensive midfielder Halder, who led the side, also thwarted a header from Mohamed Al Romaihi directed towards the Indian goal towards the close of the first half.

In the second session, Constantine brought in Jeje Lalpekhlua in place of Ashique Kuruniyan but that did not give India any advantage as it was Bahrain who completely dominated the final 45 minutes.

The woodwork saved India in the 71st minute as Marhoon's header off a corner hit the upright.

Goalkeeper Gurpreet, who had to make a series of saves in the second half, was called to action in the 84th minute when he made a last minute deflection off a header by Abdulla Yusuf Helal.