It will be India's toughest match in the group stage. The UAE are currently ranked 79 in the FIFA rankings and have defeated India on eight occasions in 13 meetings. 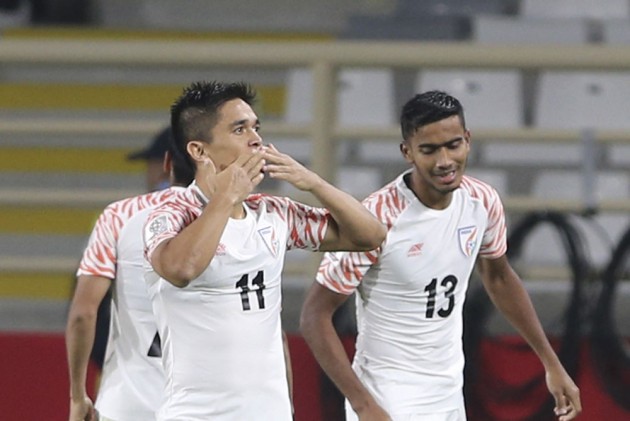 A buoyant India will take on wounded United Arab Emirates (UAE) in a crucial Group A match of the 2019 AFC Asian Cup on Thursday at Abu Dhabi.

India's 4-1 win over Thailand in their opening match has effectively changed the dynamics of the group. A good result for India, even a draw would pressure on the hosts, who have played out a 1-1 draw with Bahrain, the lowest ranked team in the group.

So, the prospects of India getting an easy outing is out of the picture. The Whites are the highest ranked, and also strongest outfit, both literally and figuratively, in the group.

All You Need To Know About Asia's Biggest Football Tournament

AFC Asian Cup: When And Where To Watch India Matches

'The Game Is Played On The Field, Not On Paper'

It will be India's toughest match in the group stage. The UAE are currently ranked 79 in the FIFA rankings and have defeated India on eight occasions in 13 meetings, with India winning three times.

The last time, the two teams met at the Ambedkar Stadium in New Delhi in 2011, the match ended in a 2-2 draw with Jeje Lalpekhlua scoring the all-important equaliser.

If India are to repeat a similar result, India will need to play full 90 minutes. Against Thailand, India only turned up in the second half. A slow start or bad ending will prove detrimental to India's fortunes.

Then, there is the technical aspect to be taken care of. India were lacklustre in the first half against Thailand and were seen relying on unreliable long balls. With poor delivery and even poorer physical presence in the opponent box, it became an eyesore despite witnessing some good moves. And they can surely hope not to deploy the same tactics against a far superior team like the UAE.

If Halicharan Narzary and Udanta Kumam manage to make their blistering runs on the flanks and deliver precise crosses for often unmarked Sunil Chhetri, India can hope to score goals. But a failure from Indian wingers will mean that India hoping against hope to beat the hosts in the midfield, which is almost impossible considering the obvious.

So, it will depend how well Constantine utilises the wingers. If India succeed in this aspect, then the often unmarked skipper in good positions can be a real threat to the hosts. All he needs is some good crosses.

Indian defenders will also be required to be extra vigilant against the likes of Ali Mabkhout and 2015 Asian Player of the Year, Ahmed Khalil. Mabkhout is seven goals shy of becoming the UAE's all-time top scorer.

But the hosts will miss the services of the injured Omar Abdulrahman who is regarded as one of Asia's best players, but Alberto Zaccheroni's men have enough firepower to test Gurpreet Singh Sandhu in India's goal.

Stephen Constantine, India coach: We know all the three games are going to be very tough. There'll be no easy game at this level. But we'll go toe-to-toe with them. A game is not played on paper, but on the pitch. The UAE are the hosts and will be under pressure. It’s understandable they will go for all three points.

Alberto Zaccheroni, UAE coach: What we lacked on the pitch was the fighting qualities from the players. We will address this when we are preparing for the next game against India and we'll come with a different attitude.