Amid the concerns caused by the third wave of the COVID-19 pandemic, Chinese Taipei became the first team to arrive in Mumbai for AFC Women's Asian Cup 2022. India and Chinese Taipei are in Group A. 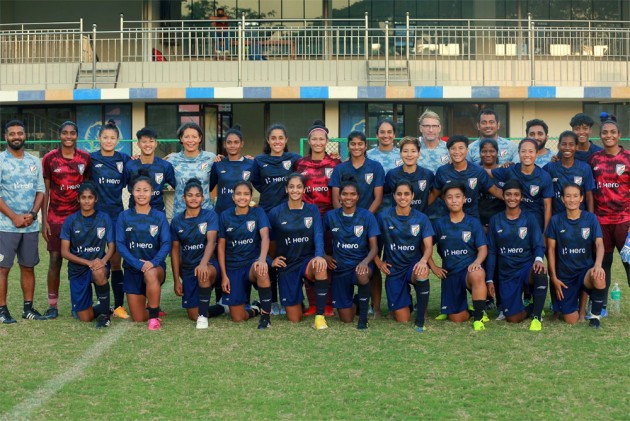 The Indian football team arrived here for the AFC Women's Asian Cup on Thursday, hours after its scheduled flight from its training base Kochi got delayed. (More Football News)

Amid the concerns caused by the third wave of the COVID-19 pandemic, Chinese Taipei became the first team to arrive here for the continental tournament.

The delay in their flight from Kochi, the Indian team's base since its return from the tournament-cum-exposure tour of Brazil, also led to the postponement of the host nation's scheduled media session on Thursday evening.

Looking forward to the tournament, India head coach Thomas Dennerby said, "This is the moment we've been preparing for over the past six months. We've had over 200 sessions, a number of matches against quality opponents across four countries, and now it's time to implement all the things that we have been working on."

The 62-year-old Swede, who had also previously coached the Swedish and the Nigerian national teams, revealed that a pep talk with the players before departure to Mumbai, has helped put everyone in the correct mindset.

"We had a small meet with the players and we explained to them how important the coming few weeks are in their lives. I think this has really struck a few chords, and you can now see the determination in their eyes," he said.

The Indian team has been drawn against Iran (January 20), Chinese Taipei (January 23) and China (January 26) in Group A of the competition that consists of 12 teams.

It has also been learnt that all the teams playing in Pune will arrive in Mumbai and then commute to Pune by road.

"We are expecting the first team to be in Pune by 15th, which is Korea Republic. The teams (playing in Pune) will stay in two plush hotels in the city," a source in the know of developments said.

All teams will be staying inside a strict bio bubble and everyone involved in the tournament including all players and officials will undergo regular COVID-19 tests.

"All the staff working in the hotel will also be in the bubble and will not physically interact with anyone outside the bubble. Same goes for the drivers who will be with the team and AFC. They have also been provided accommodation," the source added.

One of the venues hosting matches is the Shiv Chhatrapati Sports Complex in Balewadi on the outskirts of Pune city.

It has hosted a plethora of international events in the past including the Commonwealth Youth Games in 2008.

Built in the 1990s, the Balewadi sports complex, as it is popularly known in sporting circles, had hosted the National Games too.

Be it tennis, rugby, football, boxing, athletics or basketball, the picturesque sports complex has witnessed many memorable sporting events.

From the 2008 CWG Youth Games, when the facilities at the stadium saw a revamp, till February 2020, the complex has hosted 36 international tournaments.

The most prominent among them is the Maharashtra Open ATP 250 WTA tennis tournament, where 50 international players participated.

In 2019, the ATP tennis tournament was hosted here and again this year the tennis courts are gearing up to host the marquee event.

In 2017, the stadium had hosted Davis Cup matches.

Coming to football, the stadium is set to host Asia's marquee event, and the Group C matches would be played at the venue.

Earlier, it has hosted the Federation Cup International Football tournament in 2010 and in 2011, they hosted the Pre-Olympic football qualifier.

The pitch at the venue has been significantly upgraded to support modern football. Also new flood lights with LED panels have been installed at the stadium, which would save power to a large extent, a senior state government official said.

New training facilities were reconstructed for the tournament. Two additional practice pitches have also been constructed to cater to the teams and apart from that the team dressing rooms, hospitality areas and the media tribune have also been upgraded.

The old lights have been shifted to one of the practice pitches while LED lights are being installed at the other practice pitch.

Some of the other prominent tournaments that the complex has hosted include Asian Junior Basketball tournament in 2009, World Junior Badminton Championship in 2008, Asian kick-boxing championship.

The complex has also hosted the Khelo India Games.